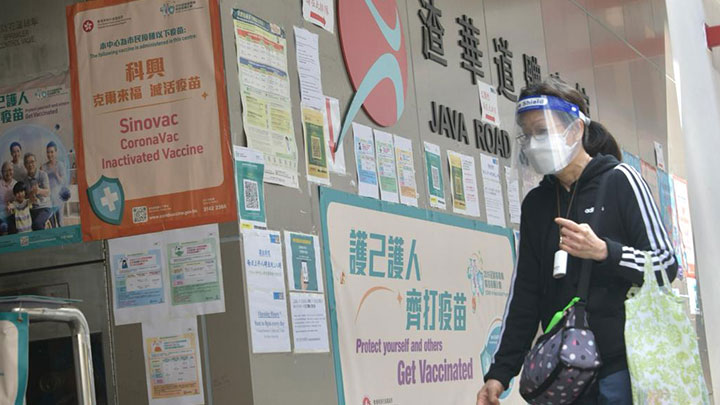 It is believed that the Hong Kong government and most citizens would disagree with waiving the use of vaccination pass for adults aged below 60, professor of Respiratory Medicine at CU Medicine David Hui Shu-cheong said.
Hui's comments came after two University of Hong Kong scholars wrote on Ming Pao on Monday asking authorities to ditch the "no jab, no entry" requirement for adults under 60 as they are very unlikely to develop serious illnesses and death upon contracting Covid, adding it is "meaningless" to pursue a higher jab coverage among the age group.

Speaking on a radio program, Hui said he believed the government and most people would disagree with such a proposal, as young patients still put pressure on the healthcare system.

He said the level of antibodies would drop even after receiving the Covid-19 vaccine and it would be impossible for the city to cope with the possible sixth wave of the pandemic without booster jabs.

Citing studies in the United States, he said the immune response of T cells decreased 9 months after injection; therefore a third dose is necessary for reducing the risk of severe disease.

As for Singapore, Hui said the local booster jab rate is relatively higher, so although there are still infections in the community, the impact on the health care system is limited.

He added that Hong Kong needs to first boost the vaccination rate of the third jab before further relaxing social distancing measures. Otherwise, once the number of infections increases, it will affect resuming quarantine-free travels with the mainland.

He also said Hong Kong has not adopted the strategy of “living with Covid,” so young patients with lower risks of serious illness still need to be isolated, adding a burden on the city’s healthcare system.
#COVID-19  #vaccine  #Covid
Add Comment