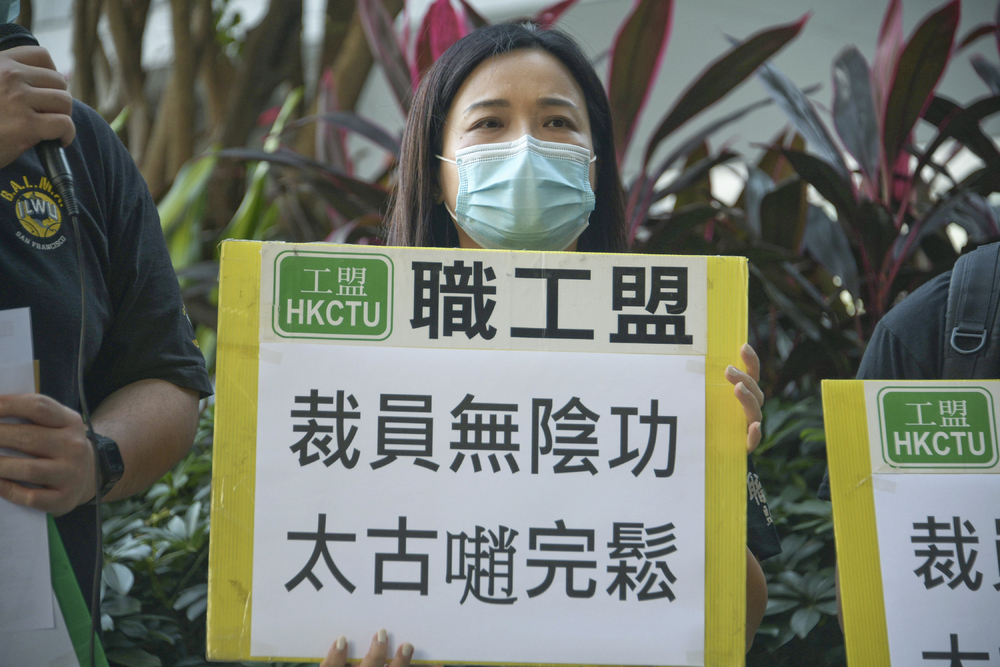 Carol Ng Man-yee, one of the 47 pro-democracy defendants charged with subversion, has stepped down from the position as chairwoman of the Confederation of Trade Unions.
Her resignation came days after the 50-year-old parted ways with the Labour Party last Thursday during the hearing of her application at the West Kowloon Magistrates’ Court.

But Chief Magistrate Victor So Wai-tak, one of the designated magistrates to preside over national security cases, refused to grant her bail, but she could still appeal against So’s decision this Saturday.

The Confederation confirmed late last night her resignation after visiting the remanded Ng. She will only remain as a member of the executive committee.

“The difficult decision was made by Ng after a huge struggle and a serious consideration, who have discussed after a thorough discussion with her lawyer. The CTU totally understands and supports her decision,” it said.

On the other hand, Sai Kung district councilor Ricky Or Yiu-lam, 49, who was granted bail last Thursday but still subject to the Department of Justice’s appeal, issued a statement through his lawyers, announcing his departure from politics.

“I am quitting all of my political affiliations and groups, and will not participate in future District Council, Legislative Council or any kinds of political elections,” Or said.

All were granted bail on Thursday except Yeung.

Although the 15 were granted bail after a four-day marathon legal battle on their bail applications, they were still remanded under prison custody and will appear in High Court this Thursday and Saturday as the DoJ challenged So’s decision to grant them bail.

Only four of the 15 defendants have been released on bail after the DoJ decided not to go against them on Friday.

Earlier on Saturday, National Security Law designated judge Esther Toh Lye-ping at the High Court decided to adjourn the appeal hearing till Thursday and Saturday, pending documents from the DoJ and the defense.

Other than the 15, all remaining ones were refused bail last Thursday and will remain in custody pending their court appearance on May 31.

The 47 pro-democracy politicians and activists were charged with one count of subversion under the national security law for organizing and participating in the pro-democracy camp’s primary elections last July.
Add Comment