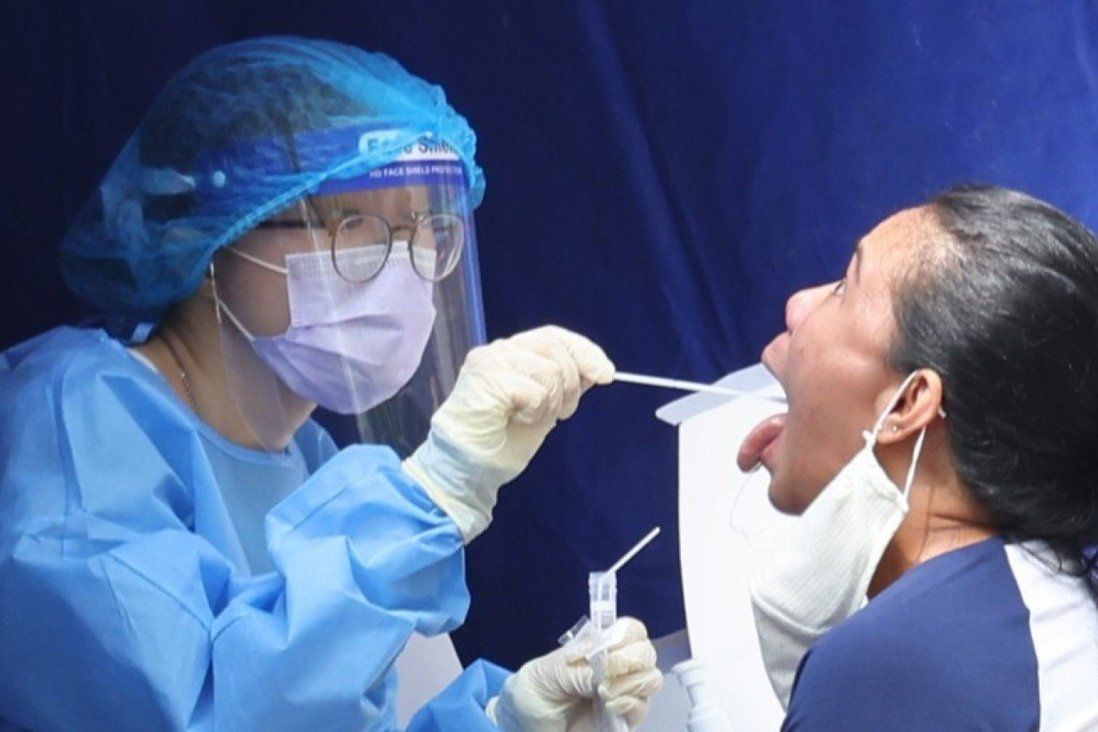 Hong Kong’s leader has ordered another round of compulsory Covid-19 testing for the city’s 370,000 foreign domestic workers, but has withdrawn a mandatory vaccination plan after discussions with consulates.

The U-turn came as Chief Executive Carrie Lam Cheng Yuet-ngor on Tuesday said the city’s coronavirus situation had stabilised after a fourth day of zero local infections. She announced that schools would resume face-to-face classes on a half-day basis from May 24.

Speaking ahead of her weekly Executive Council meeting, Lam also apologised for the chaotic arrangements experienced by residents forced into mandatory quarantine over the weekend. 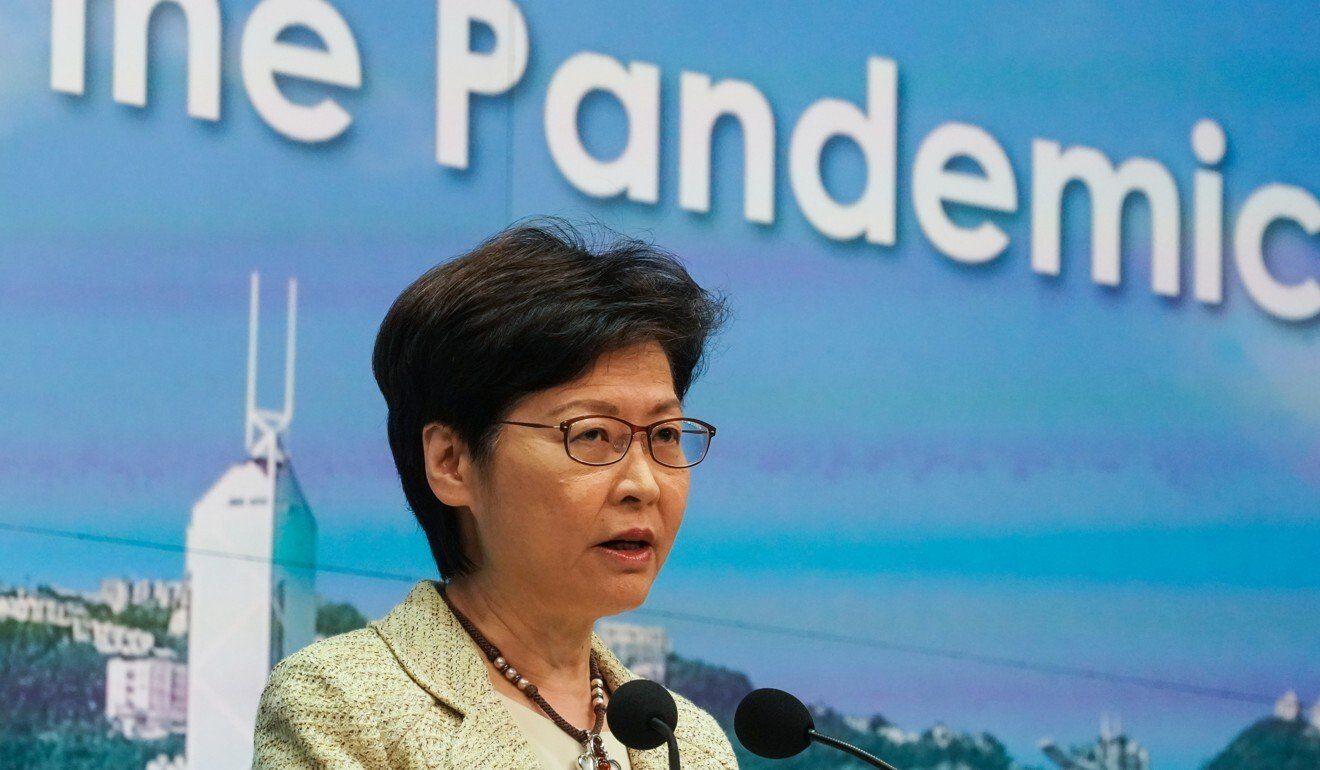 “The [helper vaccination] policy has aroused a lot of concerns, so after evaluation based on public health and taking into consideration the fact that other countries are still not asking for mandatory vaccinations … as well as the legal risks of such a plan, the government has decided not to request mandatory vaccination when helpers renew their contracts,” she said.

Lam added that another round of mandatory testing would be required for all domestic helpers soon, though those who had been vaccinated would be exempted. The new round of testing will start on Saturday with a screening deadline of May 30.

“It’s like we’re working in the dark when determining appropriate public health measures,” she said.

“We have to take precautions before any possible outbreaks, as we had found some infectious Covid-19 variants in the community. Having considered the inconvenience caused to the helpers and the employers [by the previous deadline], we have decided to extend the testing period for the second round.”

Lam said more than 340,000 helpers showed up for the recent screenings, which lasted just nine days and ended on May 9, uncovering three infections. Most of the remaining workers had been vaccinated and did not require tests.

The decision to retest all domestic workers prompted an angry response from the Philippines’ top diplomat in Hong Kong, Consul General Raly Tejada, who said it was “illogical” that employers did not have to be screened as well.

Tejada said he was informed of the plan during a Monday meeting with labour minister Dr Law Chi-kwong.

“I questioned the necessity of another mandatory test, citing the near-perfect compliance of domestic workers to the initial mandatory test,” Tejada said.

“I said that the initial mandatory test was already a success, having caught three cases that were linked to the previous initial case and therefore traceable. I also stated that I find it illogical to not include the employers who are in the same household.”

But Law told him that screening employers as well would mean having to test about 1 million people, posing logistical challenges.

Tejada said he believed the second mandatory round would “not go down well with the community”.

In a statement, the Indonesian consulate called the second round of testing an “unfair policy”, noting helpers had already been screened earlier this month. 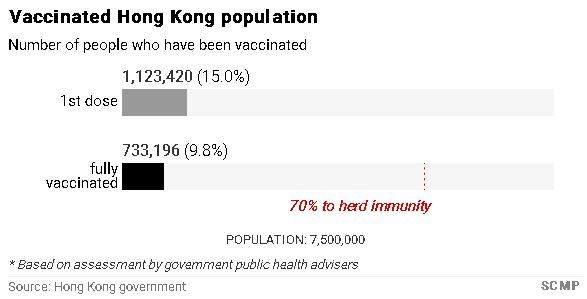 Addressing the mandatory quarantine recently imposed on more than 2,000 city residents, Lam apologised and thanked them for their understanding, saying she understood they had faced unpleasant experiences ranging from poor food to confusion about when they could leave the government facility.

Lam on Tuesday also noted that no major outbreak had followed the discovery of more infectious Covid-19 variants in the community in mid-April, pointing to a seven-day rolling average of just 0.1 untraceable cases. Only one case, imported from Indonesia, was recorded on Tuesday.

But she said Hong Kong’s current social-distancing rules would remain in place until May 28 as a cautionary measure, while schools would be allowed to resume face-to-face classes on a half-day basis on May 24, after the Diploma of Secondary Education (DSE) exams.

She added that the announcement was intended to give schools more time to prepare. 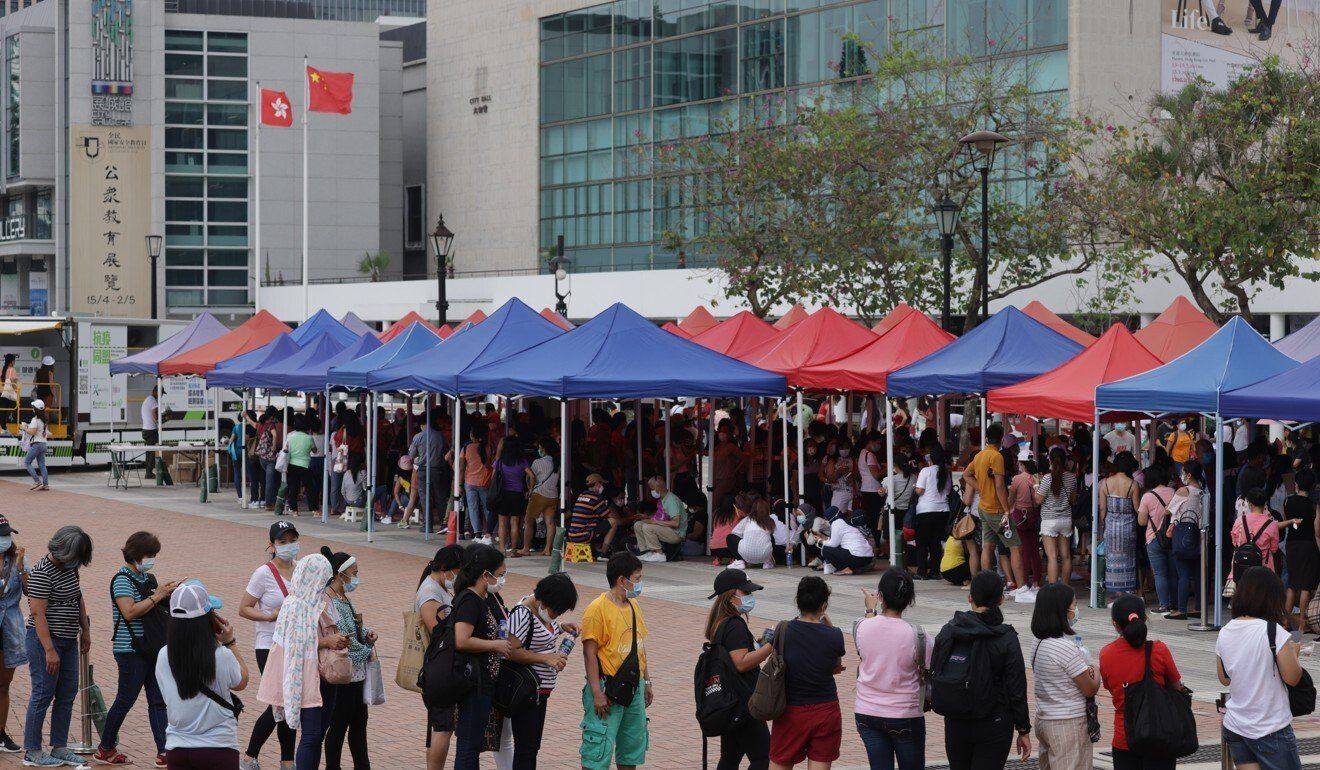 People queue up for mandatory Covid-19 testing earlier this month.

The withdrawal of the helper vaccination plan came a week after Lam announced that the government had decided to review the controversial proposal and conduct further discussions with stakeholders.

Authorities sparked an outcry on April 30 when they announced all domestic helpers would have to be vaccinated when renewing their contracts or applying for a Hong Kong work visa, with labour minister Law saying it was not too much to ask as those affected could “choose not to work in Hong Kong”.

In response, Tejada from the Philippine consulate argued on May 1 that if domestic helpers from his country were forced to accept the new policy, it should apply to all non-resident foreign workers for the sake of fairness. Philippine foreign affairs secretary Teodoro Locsin Jnr also waded in, saying the move “smacked of discrimination”.

Indonesia later joined the Philippines in appealing for a fairer application of anti-pandemic measures.

Separately on Tuesday, respiratory medicine specialist Dr Leung Chi-chiu said while no new mutated coronavirus variants had been recorded in the past few days, the city should remain on alert for the next two weeks given that the virus could still be incubating in the community.

“Having these [variant] cases in the community brings many troubles … If we’re unlucky, it could lead to a continuous spread or even a large outbreak,” he warned.