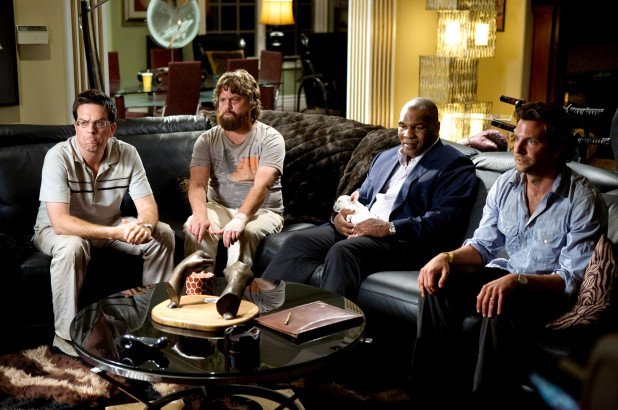 The 54-year-old heavyweight legend, who said he looked like a “pig” during the time of filming, did not even know he was set to feature in the comedy classic.

But after bumping into Zach Galifianakis and fellow co-stars on a night out, Tyson was told about his Hollywood cameo and on set a day later.

He told motivational guru Tony Robbins: “I met the guys in a club, they were in the VIP section and I said, ‘This is where I normally sit, nobody’s normally here.’

“So I went in there, I’m checking these guys to see what they’re doing in my section. It was Zach, the other guy, and he said, ‘We’re going to be in a movie with you’ and I said, ‘Yeah? When?’ And he said, ‘Tomorrow,'” Tyson recalled.

“And I didn’t know as I was drinking and smoking back then, doing drugs so I didn’t know I was involved in the movie. So eventually I had to go and do the movie and it was a success.“

Tyson played himself in the 2009 blockbuster, as Galifianakis, Ed Helms and Bradley Cooper stole one of the boxer’s famous tigers.

Iron Mike goes on to knock out Alan - played by Galifianakis - before his tiger cat is returned.

But in a 2012 interview with Yahoo Sports, the reformed “Baddest Man on The Planet” revealed how he was on cocaine while filming.

“I was a mess. I was overweight. I was a pig, high on cocaine,” Tyson said.

The youngest heavyweight of all time would make another appearance in “The Hangover Part 2” and built up a friendship with “A Star Is Born” lead Cooper.

The American ring icon has since launched his own Broadway show discussing his iconic and turbulent career while going on to turn his life around.

Tyson is even training again as he hopes to fight for the first time in 15 years, eyeing a comeback for charity.

But his famous punch on funnyman Galifianakis is what the legendary puncher credits for helping regain his popularity among fans.

“One day I’m in a restaurant and the movie hadn’t come out yet, but the kids must have seen the preview of me punching Zach,” Tyson said. “So one of those sightseeing buses went by and all the kids came off the bus and grabbed me, taking pictures and my friend says, ‘I think we’ve got something here, Mike’ and I said, ‘Yeah, me too.’”

He added, “It’s been different, it’s changed ever since. When I go out and I meet younger kids that are 20 or 15, it’s because they watched ‘The Hangover’ — they had no idea that I used to be a boxer.”