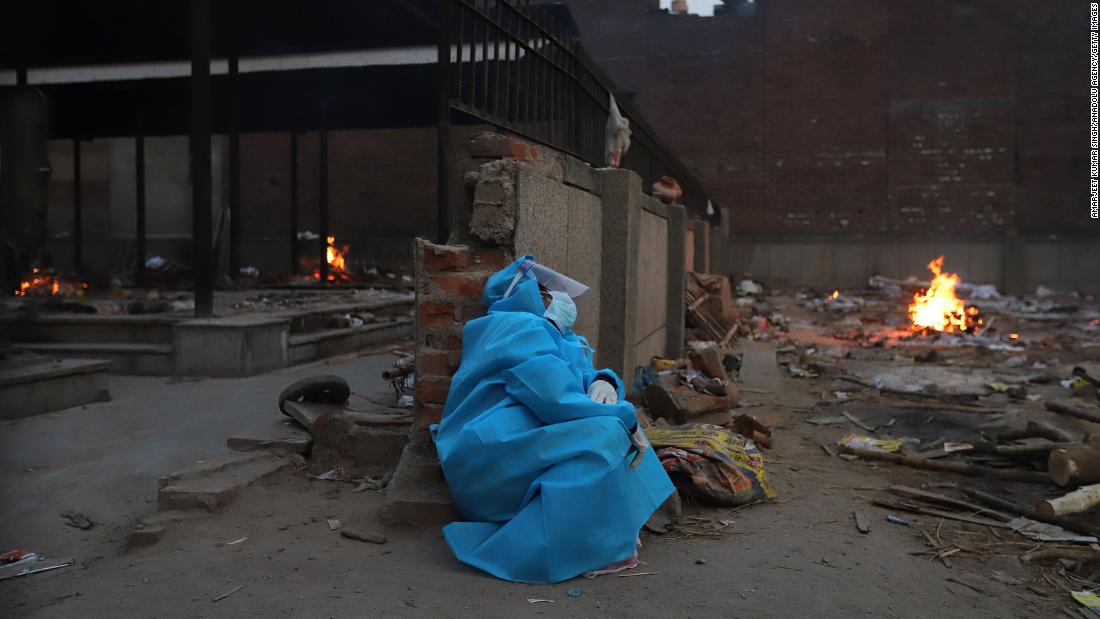 The Indian government has been blasted for ignoring warnings of a second wave, encouraging complacency, and failing to be transparent on Covid-19 data, in a scathing editorial in prestigious medical journal The Lancet.

India is currently in the midst of the world's worst Covid-19 outbreak. It reported 403,738 additional cases Sunday, marking the fourth consecutive day it has recorded more than 400,000 cases and bringing the country's total reported infections to more than 22 million.

More than 900,000 Covid-19 patients in India are on oxygen support -- about a quarter of all active cases -- and a further 170,000 are on ventilators, the country's health minister, Harsh Vardhan, said Saturday. India has a test positivity rate of about 22%, according to Johns Hopkins University, meaning it is likely not capturing all Covid-19 cases.

The health ministry also reported an additional 4,092 deaths Sunday, the second time in a row the country has recorded more than 4,000 deaths in a single day.

India has now recorded 242,362 Covid-19 deaths -- the third-highest death toll in the world. The Institute for Health Metrics and Evaluation at the University of Washington estimates that by August, India may have reached 1 million deaths.

"If that outcome were to happen, (Prime Minister Narendra) Modi's Government would be responsible for presiding over a self-inflicted national catastrophe," the Lancet editorial warned.

According to the Lancet editorial, India "squandered its early successes" in controlling Covid-19.

The government failed by giving the public the impression the country had beaten the virus, which encouraged complacency and insufficient preparation, and slowed the start of the country's "botched" vaccination campaign, according to the editorial. Despite warning about "the risks of superspreader events," religious festivals and political rallies were allowed to go ahead.

And on top of that, the government tried to control critical discussion online, by asking Twitter to remove tweets about Covid-19, including some that were critical of Modi.

"Modi's actions in attempting to stifle criticism and open discussion during the crisis are inexcusable," the editorial said.

The editorial urged India to increase vaccine supply and work to create an equitable distribution system of the vaccine. As of Saturday evening local time, 35 million people in India had received their second dose, meaning about 2.7% of India's 1.3 billion population are fully vaccinated, according to a press release issued by the health ministry.

The editorial noted that until April, the government's Covid-19 taskforce had not met in months.

"The consequences of that decision are clear before us, and India must now restructure its response while the crisis rages," the editorial said. "The success of that effort will depend on the government owning up to its mistakes, providing responsible leadership and transparency, and implementing a public health response that has science at its heart."

With hospitals battling desperate shortages of oxygen, India's top court has set up a 12-member National Task Force to assess the availability and distribution of medical oxygen, according to a court order released Saturday.

Hospitals across India have been reporting desperate shortages of oxygen despite dozens of countries pledging critical aid.

Last week the Indian government said it had installed a "streamlined mechanism" for allocating aid, but state and local authorities said they had been kept in the dark.

The task force has been set up to give central government input and strategies for meeting the challenges of the pandemic, according to a court order released Saturday.

"The rationale for constituting a Task Force at a national level is to facilitate a public health response to the pandemic based on scientific and specialized domain knowledge," the order said, adding that it expected leading experts. "This will facilitate a meeting of minds and the formulation of scientific strategies to deal with an unprecedented human crisis."

Based on the order, the terms of reference are to "assess and make recommendations for the entire country based on the need for, availability and distribution of medical oxygen" as well as to determine the amount of medical oxygen to be allocated to states and union territories on a "scientific, rational and equitable basis."