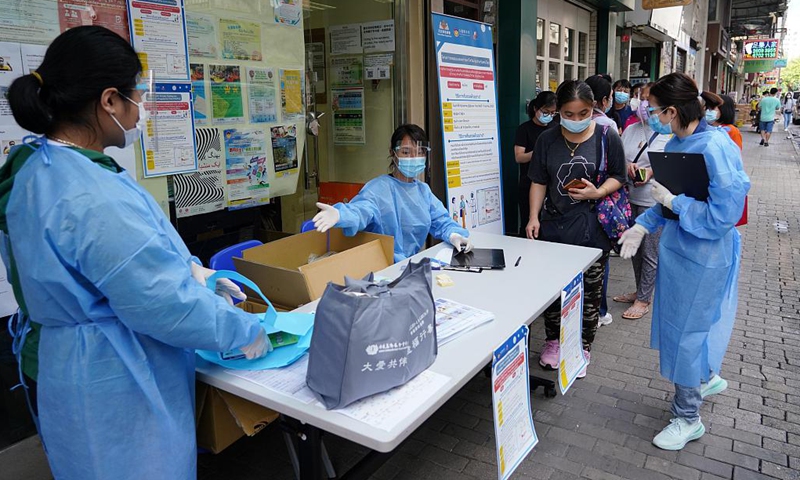 Hong Kong experts argued that conducting nucleic acid tests on the city's entire population may not be the best choice for the SAR, contradicting earlier suggestions from mainland scientists.

Hong Kong Chief Executive Carrie Lam told reporters on Tuesday that the next two weeks will be crucial, as the new wave of infections is severe. She urged people to stay at home, especially the elderly, and to avoid unnecessary gatherings, Hong Kong Commercial Daily reported. 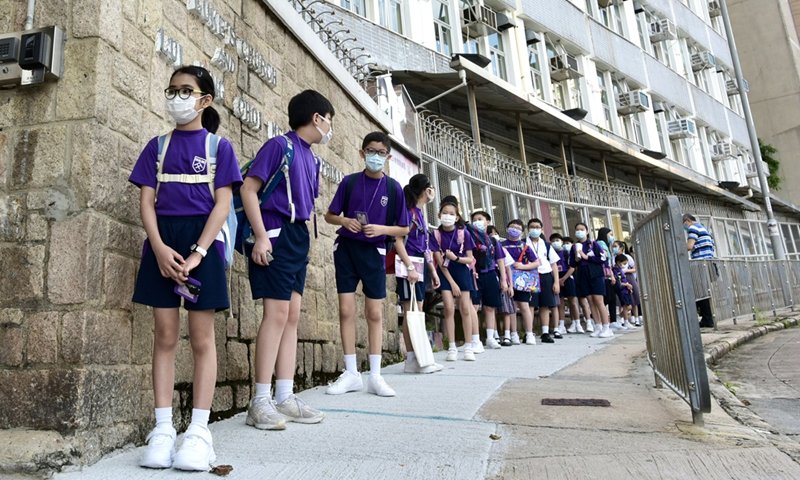 Wearing masks and keeping their distance, Hong Kong pupils wait outside a school.

The HKSAR government announced Monday it will tighten up anti-epidemic measures to the maximum extent, bringing back a ban on gatherings beyond two people on Wednesday. The fixed penalty for the violation will be increased to HK $2,000 ($258).

Mainland scientists suggested Friday that conducting nucleic acid tests on the entire population is a top priority for the HKSAR, and would be the most efficient approach in the context of the new cases, as the Chinese mainland has had success in controlling and preventing outbreaks or new waves of the pandemic in major cities with large populations like Wuhan and Beijing.

However, Jin Dongyan, a professor at the School of Biomedical Sciences at the University of Hong Kong, told the Global Times that this method may not be the best choice in the fourth wave of infections in HKSAR, as the cost would be too high in proportion to the number of confirmed cases.

Jin pointed out that although the fourth wave of the outbreak reached a critical point on Sunday, the number of confirmed cases went down on Monday and Tuesday. This indicates that the epidemic is now under control and close contacts were efficiently identified after strict screening.

"Nucleic acid tests on the city's entire population cannot prevent the virus transmission, especially in HKSAR. One can test negative this time but go outside and then have contact with potentially infected people afterward," said Jin, "What we have learned from the experience of Beijing's Xinfadi market is to seriously trace, check and quarantine all close contacts while implementing the 'stay-at-home' order."

Experts suggest that this wave may be less transmissible, with only 20 percent of confirmed cases actually being highly transmissible.

Jin also mentioned that the HKSAR government is drafting a new plan to contain the epidemic. In the past, people coming in from abroad were isolated in self-selected hotels and not separated from other hotel guests. Now, the government has uniformly arranged several fixed hotels for quarantine which will be closed to the public.

"We should also increase the frequency of public transportation to avoid crowd gatherings, or learn from Singapore by allowing people to go out on alternate days depending on the last digit of their identity card or foreign identification card number," Jin told the Global Times.