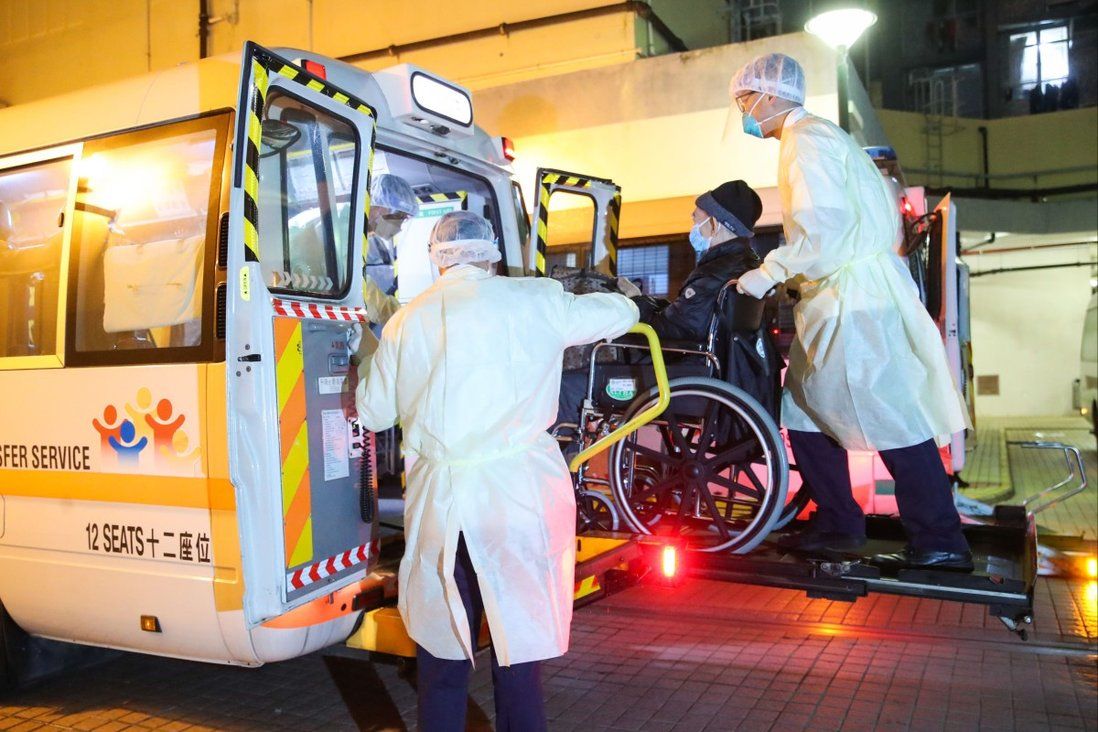 A Hong Kong government plan to recruit mainland Chinese workers to care for infected elderly and disabled residents is facing challenges, as some candidates are concerned about the risk of catching Covid-19 amid the city’s raging epidemic.

The decision by local authorities to recruit from across the border was in response to severe personnel shortages among care workers, with the sector having been crippled by an increasing number of Covid-19 infections among employees.

City leader Carrie Lam Cheng Yuet-ngor and employment agencies said the recruitment process had not gone as smoothly as expected. One agency told the Post it had received about 500 applications so far and more than 100 workers had arrived in the city.

Lam told a daily press briefing on Saturday that the government was recruiting more local care workers, as well as looking for candidates from elsewhere, including the mainland, to alleviate the workforce shortage.

“We hope to recruit 1,000 care workers from the mainland so that we can operate all the [isolation] facilities I mentioned. But I’m afraid even this recruitment has encountered problems,” she said, without elaborating further.

On March 1, the Social Welfare Department announced it planned to hire 1,000 staff from the mainland to fulfil roles for three months at temporary care centres, community isolation facilities and quarantine camps to care for elderly residents, people with disabilities and other potential or confirmed cases.

Secretary for Labour and Welfare Law Chi-kwong last week said the recruitment of mainland workers was not easy, as a monthly salary of about HK$30,000 (US$3,832) was not attractive enough for candidates to consider looking after a large number of infected people.

He also said last week that about half of local care home staff had been unable to work, including many who had contracted Covid-19 or were placed in quarantine.

The person in charge of F.E.L.C. (Hong Kong) Co. Limited, an employment agency that is helping to recruit temporary care workers from the mainland, said the process had initially been slow as Hong Kong had reported a surge in cases.

“Many workers from the mainland were worried about Hong Kong’s worsening pandemic situation and feared getting infected, while some were discouraged by their concerned family members,” he said, asking not to be identified.

But he said things had gradually improved as the number of daily infections in the city had declined, adding some candidates “felt responsible for Hongkongers”.

He said the company had received about 500 applications and had already brought over more than 100 workers in batches.

All of the care workers were women in their 30s to 50s, with most coming from Guangdong and Guangxi provinces, he said, adding that many had performed similar roles on the mainland.

He added that some had previously worked in care facilities in Hong Kong, while others had no such work experience.

The agency’s screening criteria required candidates to be under 60 years old, fluent in Cantonese, fully vaccinated for at least 14 days and healthy, he said, with a preference for applicants with previous experience as care workers.

However, despite Law’s concerns about insufficient pay, the agency said the monthly salary of HK$31,000 was attractive to many candidates, as it was higher than the HK$14,000 that mainland carers received on average in Hong Kong.

The government also covered other expenses for mainland workers, including hotel accommodation and travel permit fees, he said, adding that the processing of workers’ travel documents to Hong Kong had been shortened to a few days.

“Carers have always been the top imported workers from the mainland to Hong Kong, as not many Hongkongers are willing to take these jobs,” he said.

Among them, 409 care homes for the elderly and 164 facilities for the disabled have recorded cases over the past two weeks.

Hong Kong confirmed 27,647 new coronavirus cases on the same day, with 198 Covid-related deaths reported in the past 24 hours, in addition to a backlog of 87 fatalities.

In an interview published on Saturday, labour minister Law told state news agency Xinhua that three isolation facilities for the elderly, consisting of AsiaWorld-Expo, and Choi Wing Road and Shek Kip Mei Park sports centres, could provide up to 1,342 beds.

The occupancy rate at AsiaWorld-Expo had reached 62 per cent as of Thursday, and at Choi Wing Road and Shek Kip Mei Park sports centres it stood at 67 per cent and 85 per cent respectively.

Two more holding centres would begin operations next week, Law said, while another five sites would gradually start providing support once staff had been trained.