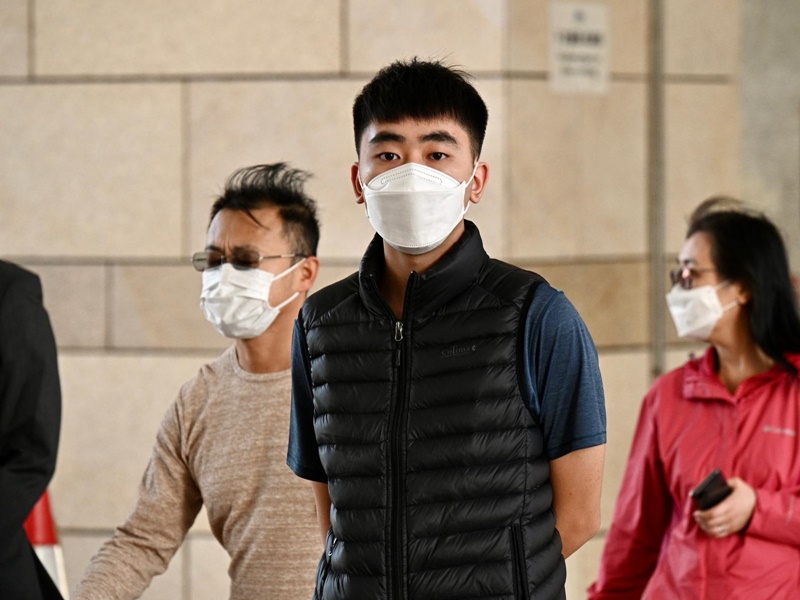 A magistrate slammed a student defendant "brother lunch" for not working hard at school and focusing on politics after he breached the social gathering cap when joining a protest last year.
Li Kwok-wing, 19, pleaded guilty to breaching the cap in a protest at International Finance Centre mall on April 28 last year.

He was scheduled to be sentenced on Thursday at the Eastern Magistrates' Courts, but the case was adjourned to December 16, pending probation, training center, and detention center reports.

"As a student, the defendant did not work hard at school but focused on politics and participated in gatherings regardless of the gathering cap," magistrate Andrew Mok Tze-chung said.

Li, a frequent participant of lunch protests, was nicknamed "brother lunch." He was among the crowds who responded to calls online to join the "Sing with you" event in the mall in April last year.

Some demonstrators brought a British colonial flag and flags carrying the controversial slogan "Liberate Hong Kong, Revolution of Our Times."

Riot police officers then entered the mall to disperse the crowds and set up cordons on different floors.

A total of six persons, including Li, refused to leave and were issued a summons.

He will be remanded till his next appearance at Kowloon City Magistrates' Courts.

The defense said that Li's family will ensure that he meets with social workers regularly and receives psychological and psychiatric counseling, which is believed to help his rehabilitation.

They hoped that the court will fine him instead of confining the defendant, considering his guilty plea.

Mok said dozens of people gathered at the mall that day, significantly increasing the risk of spreading the Covid-19 virus.

He said a fine was inappropriate considering the serious circumstances attached to the case. He added that the maximum penalty upon conviction of such a summon was up to six months in jail.

In this case, he said that considering the defendant's age, he decided to obtain reports from the training center, detention center, and rehabilitation center before sentencing.
#COVID-19  #Covid
Add Comment