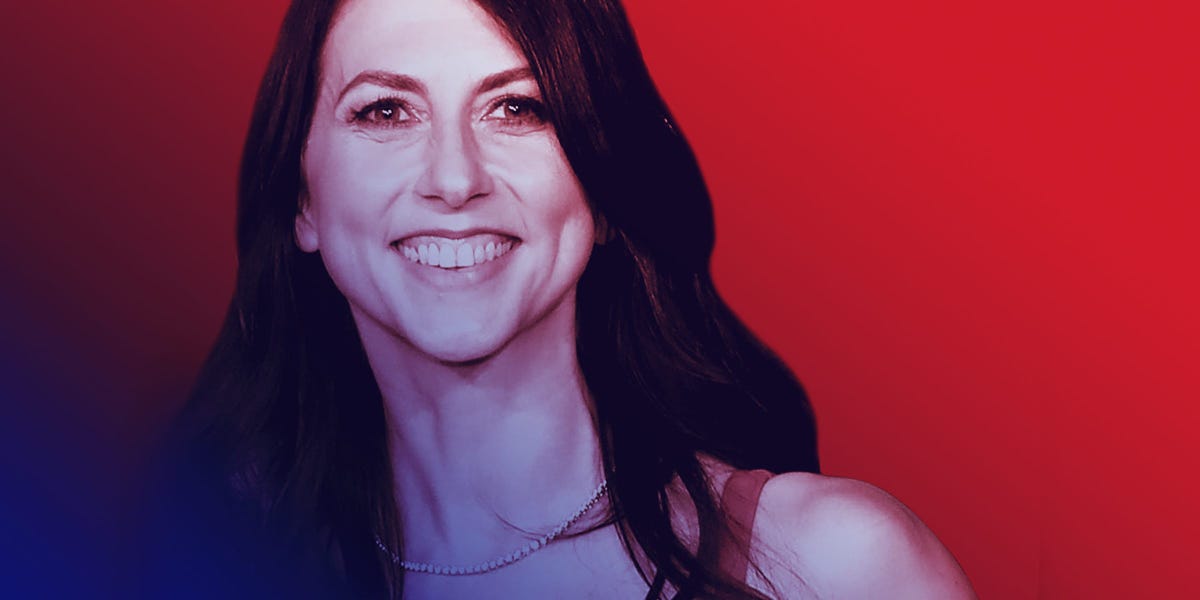 MacKenzie Scott likely had a prenup with her second husband, legal experts say. Here's what could happen next with her divorce — and how it could affect the billions designated for charity.

Scott filed for divorce from her second husband, Dan Jewett, on Monday. The couple has been married for less than two years and had embarked on a philanthropic mission together, but recently, mentions of Jewett had disappeared from Scott's posts and online profiles. On Wednesday, The New York Times broke the news that they're splitting up.

Scott was previously married to Amazon founder Jeff Bezos, and their divorce left her with a 3% stake in the e-commerce giant, a stake that has made her the world's 40th-richest person.

But legal experts told Insider that Scott's second divorce will likely be vastly different from the first time around and will almost certainly leave the majority of her $28 billion fortune untouched.

'Shocked' if there is no prenuptial agreement

When Scott's divorce from Bezos was finalized in 2019, she walked away with millions of Amazon shares worth, at that time, roughly $38 billion. Though she's been working to offload her immense wealth since then, she still entered the marriage to Jewett with assets that far outpaced most people on the planet, including her second husband.

To that end, it's almost certain that the couple signed a prenuptial agreement, according to Eleanor Alter, a partner at New York law firm Alter, Wolff, & Foley who has handled high-profile divorce cases.

"It's possible they didn't have a prenuptial agreement, but I'd be shocked," she said.

Jennifer Brandt, chair of the family law group at Pennsylvania law firm Cozen O'Connor, agreed: "In most cases when you have high net worth people, they do want to get, and are advised to get, a prenuptial agreement."

Brandt noted that prenups are especially common in cases where someone has been married before or comes into the marriage with significant wealth, which are both factors that apply to Scott.

Couple already agreed to a contract that divides their assets

Though Scott's divorce petition doesn't mention a prenup, it does say that the couple signed a separation agreement, an interim agreement that sets some rules for the period of separation before a couple is divorced. Beyond divvying up a couple's finances, it can include issues like child or spousal support, though neither request was included in the divorce petition.

"It could even dictate use of certain assets or use of properties," Brandt said. "If you have multiple properties, it may dictate where people live or what properties they may be using during an intervening period before the assets are distributed and maybe who pays for them."

Oftentimes, those types of agreements are included in a prenup, according to Alter.

While Scott's petition is publicly accessible, the separation agreement is sealed. Terry Price, a family law professor at the University of Washington, told GeekWire that details of that contract "will never see the light of day." Scott and Jewett have not commented publicly on their divorce plans.

The divorce will likely be finalized quickly

Washington, where they live, is a community-property state, meaning that the assets a couple acquires while they're married belong to both of them and therefore will be divided equitably. But if one person comes to the marriage with property of their own, they're not required to split that with their spouse in the event of a divorce, according to state law.

Which means that Scott's wealth — and her plans to donate at least half of it during her lifetime, which she's doing faster than any other living person, according to Puck — likely won't be significantly impacted by the divorce.

Alter pointed out that divorce may affect Scott's tax situation, as married people can give more money away without paying taxes, but given the scale of Scott's donations and the machinery that's likely behind it, it's unclear how her taxes will be affected, if at all.

Either way, the experts agree that Scott and Jewett will likely push for the divorce to become finalized as quickly and quietly as possible. Washington law says that the petition must be filed and served to the other spouse for at least 90 days before a judge will dissolve a marriage. Alter estimated that, given the likelihood of a prenup and the brevity of the marriage, Scott's divorce will take "a few months, at most" to complete.