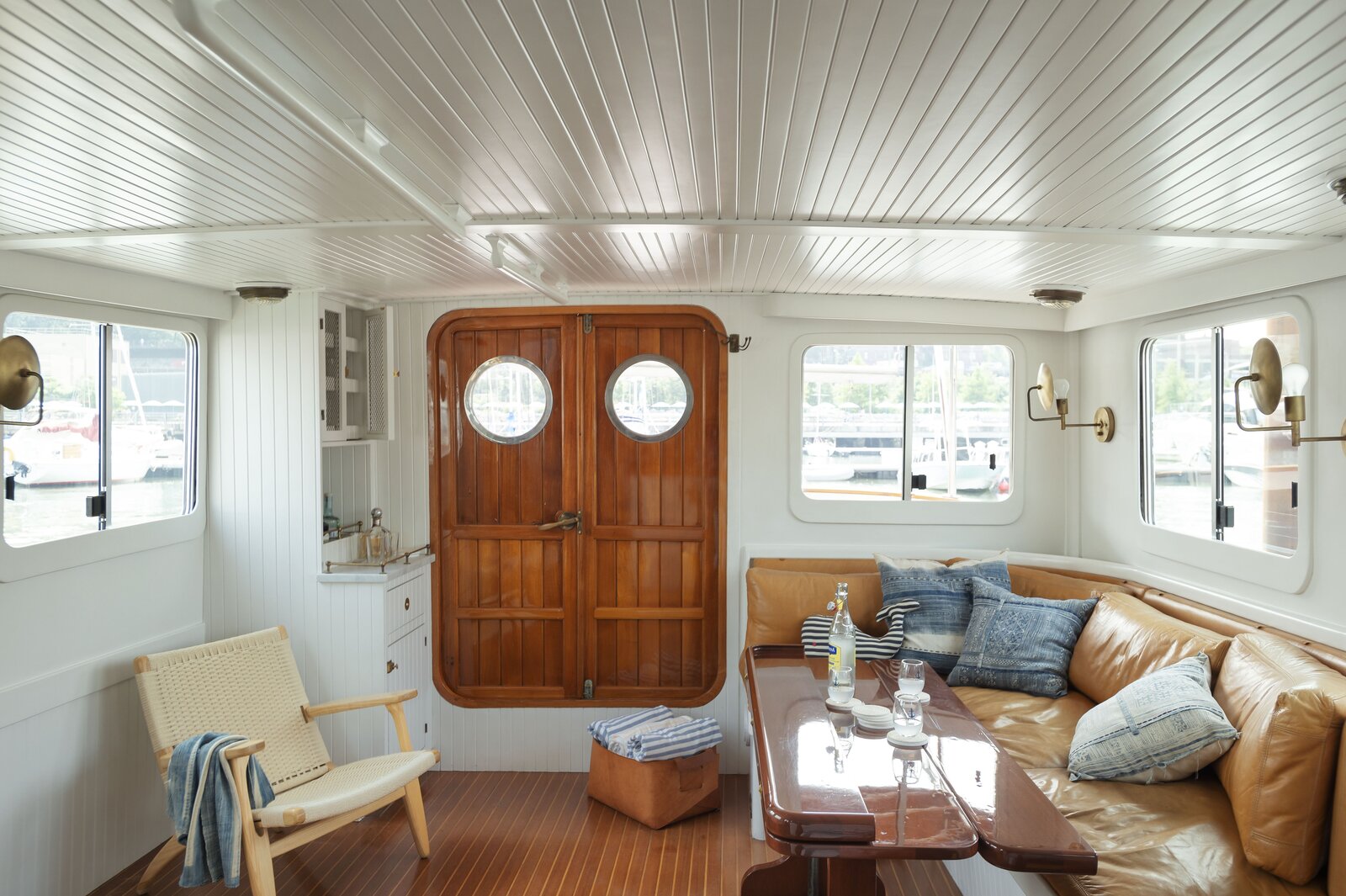 Lucy the Tugboat by The Brooklyn Home Company

The cofounders of The Brooklyn Home Company take their skill set to sea to give a 1983 tugboat a bow-to-stern revamp.

Lyndsay Caleo Karol spent summers as a child on Canandaigua Lake in Upstate New York-and while vacationing there recently, she spotted a 37-foot Lord Nelson Victory Tug and had a wild idea. Why not acquire a tugboat of her own, and renovate it to serve as a family getaway? 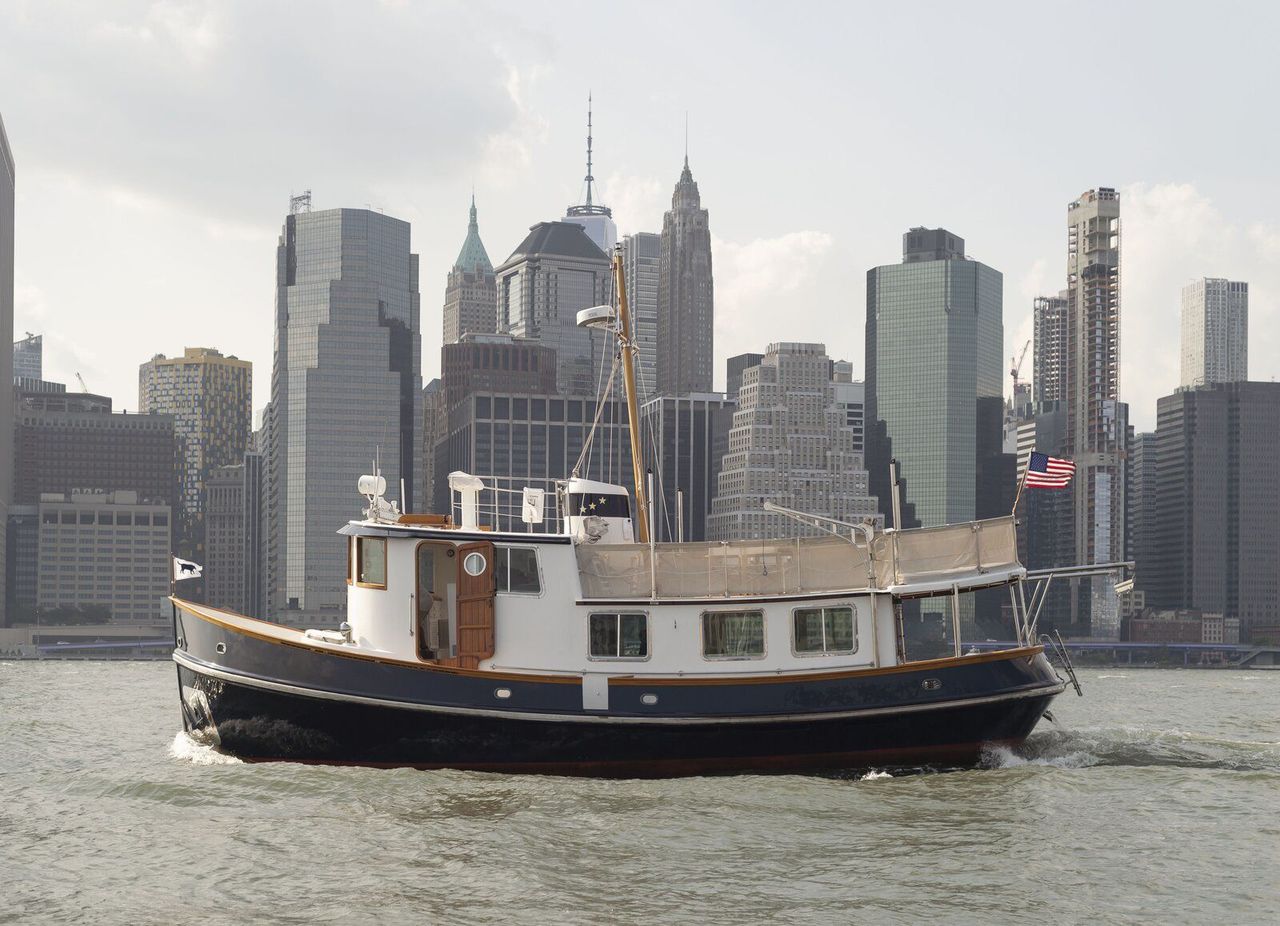 Lyndsay started her hunt, and didn’t have to look far. She found a 1983 Lord Nelson Victory Tug just up the road in Stonington, Maine. "I went back and forth from Maine three times to see the tugboat before deciding it would be our next project," Lyndsay says. "Since the boat had been out of commission for a while, it was pretty moldy and corroded, and it was clear that a lot of work needed to be done." 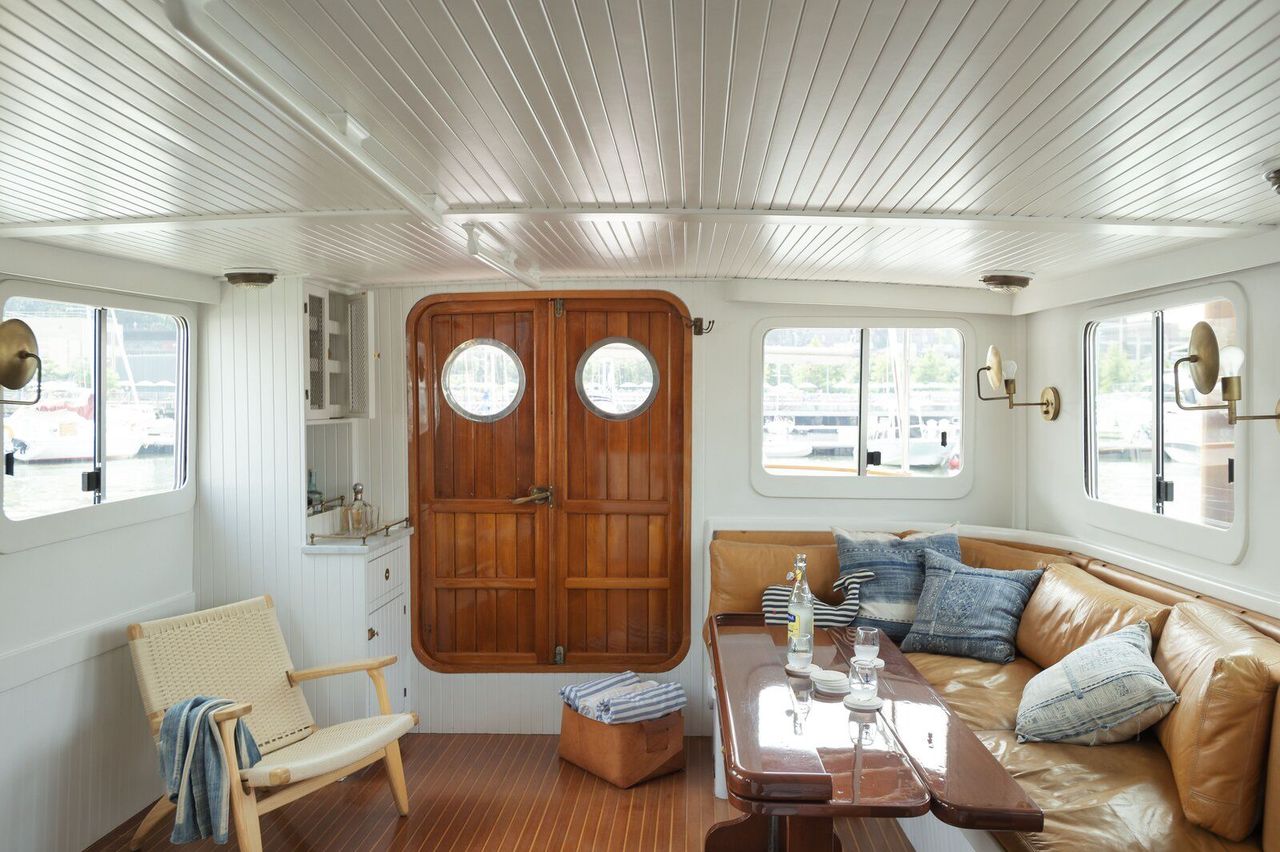 The duo gave the 500-square-foot space a complete overhaul that included rewiring the electrical system and refinishing the wood flooring.

Lyndsay and her husband Fitzhugh Karol are the cofounders of the design firm The Brooklyn Home Company, so they knew how to renovate brick-and-mortars buildings-but they had never taken their skill set to the sea. They had their work cut out for them. 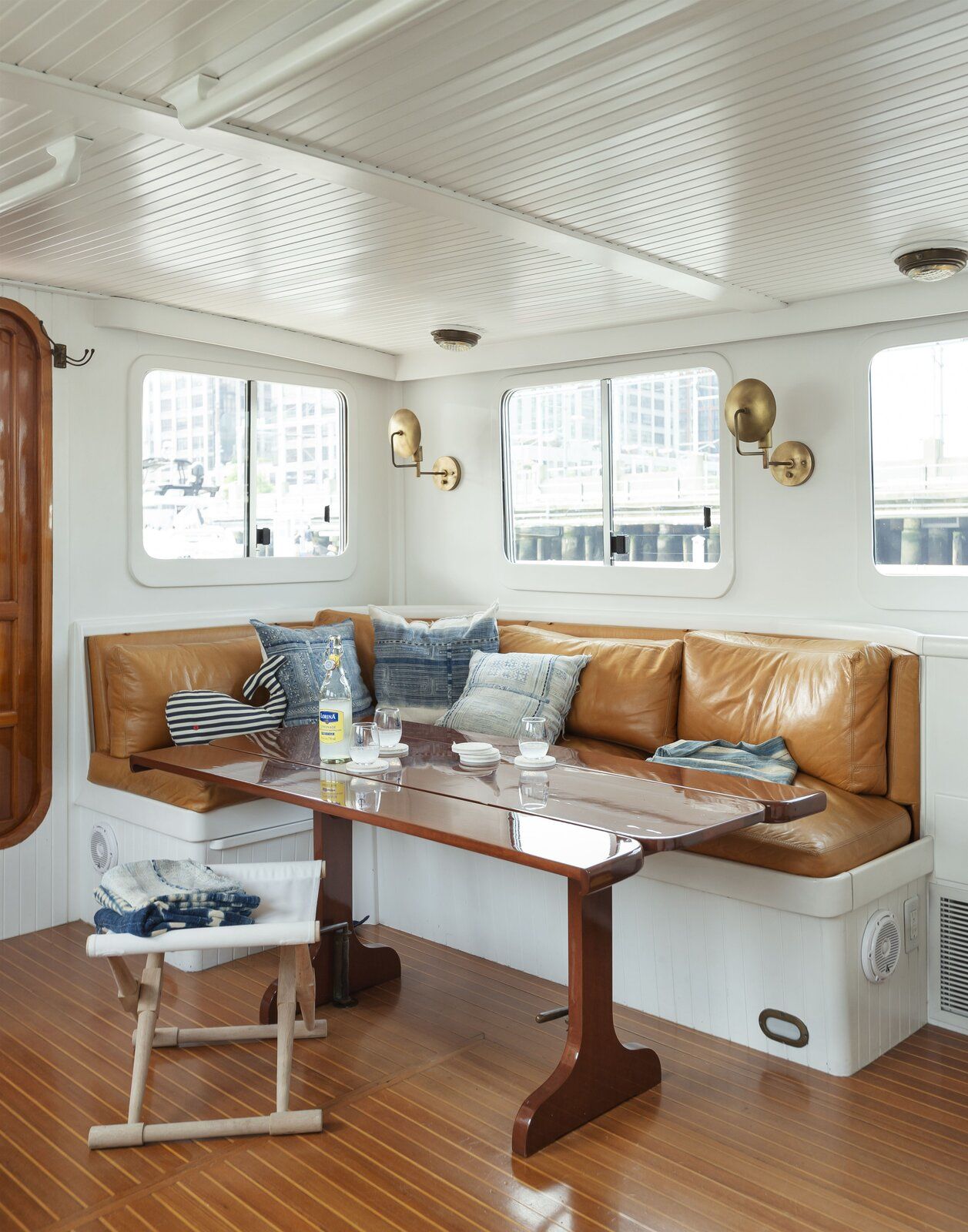 "We kept the existing layout, but removed original cabinets above the peninsula of the kitchen to create a more open, airy space," Lyndsay says.

The couple learned that the 49-foot tugboat had an interesting backstory, with a handful of previous owners, the last of whom resides in Vinalhaven, Maine. "One fun fact we learned about Lucy is that she actually won Queen of the Miami Boat Show in 1987," Lyndsay says. 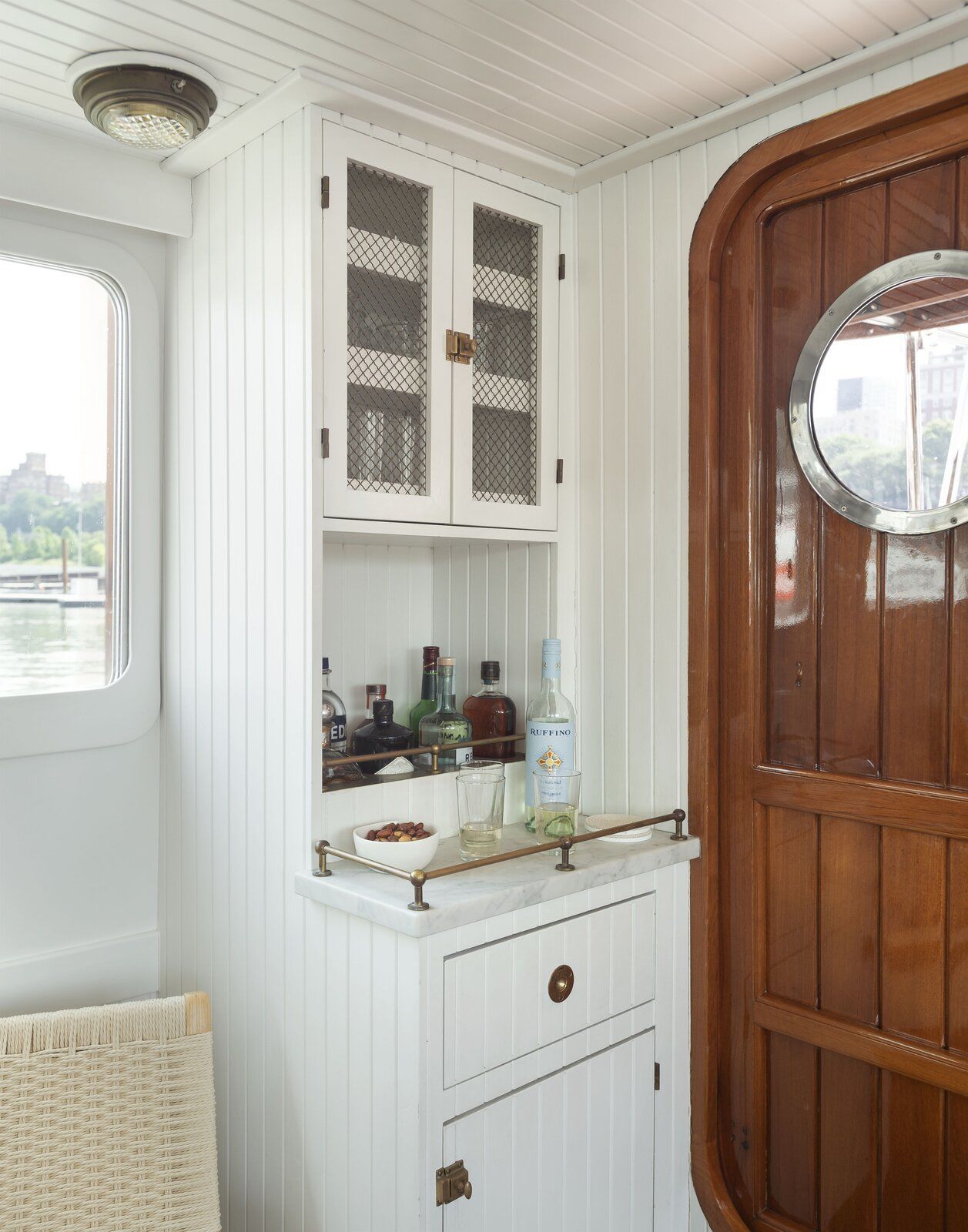 Design elements like white beadboard and brass hardware give the tugboat's interior a classic nautical vibe.

The couple named the old tugboat after their dog, Lucy, moved it to Brooklyn, and set to work renovating the 500-square-foot vessel.

"I wanted the boat to feel timeless, like every project executed by The Brooklyn Home Company, and the renovation was heavily inspired by borrowed details from antique yachts," Lyndsay says. "Even though the renovation included many modern amenities, like changing the kitchen and adding a bar, we kept the focus on the original details and design." 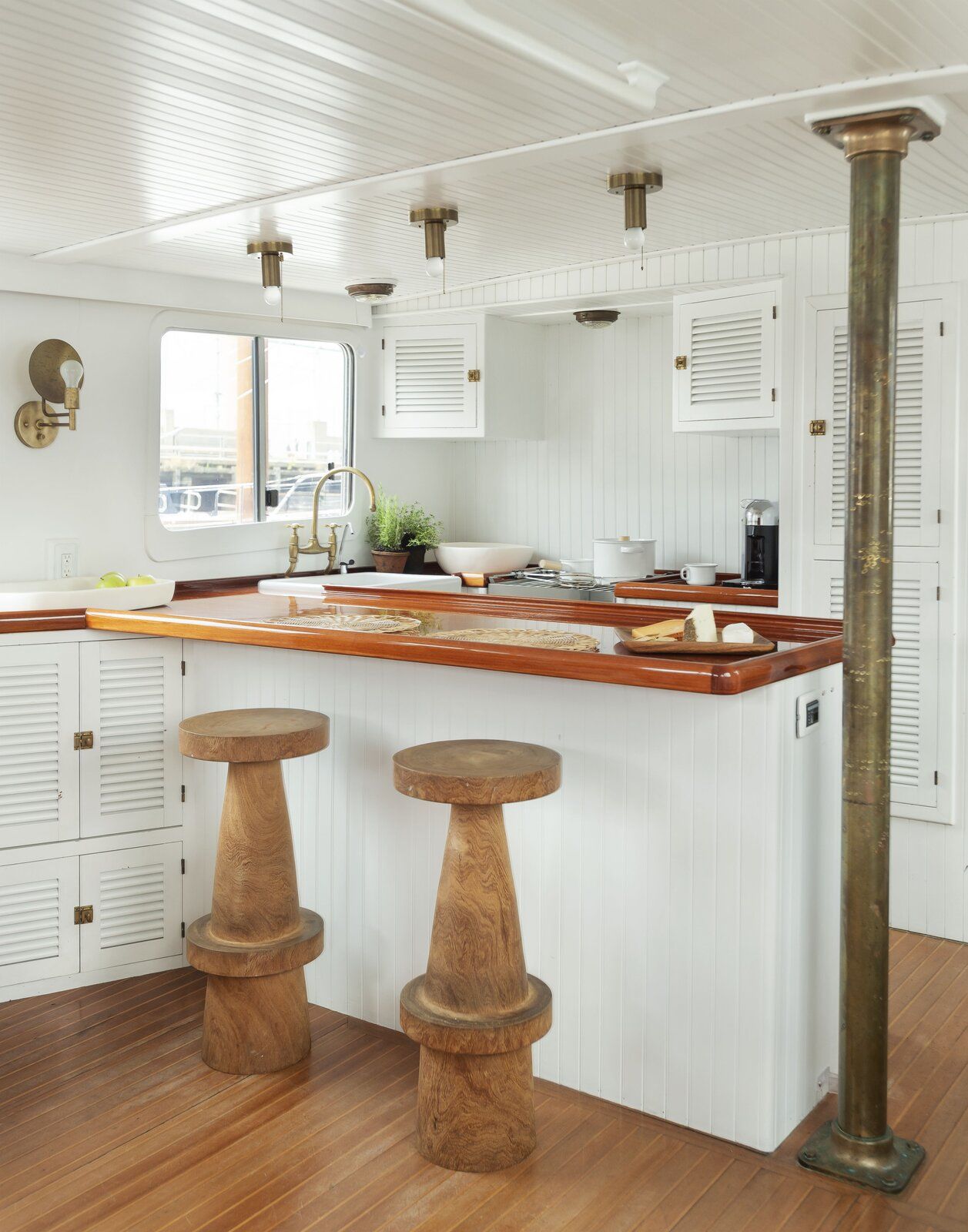 "Design choices, such as heavy bar stools in the kitchen, were made to ensure the boat could function well docked or at sea," Lyndsay says. 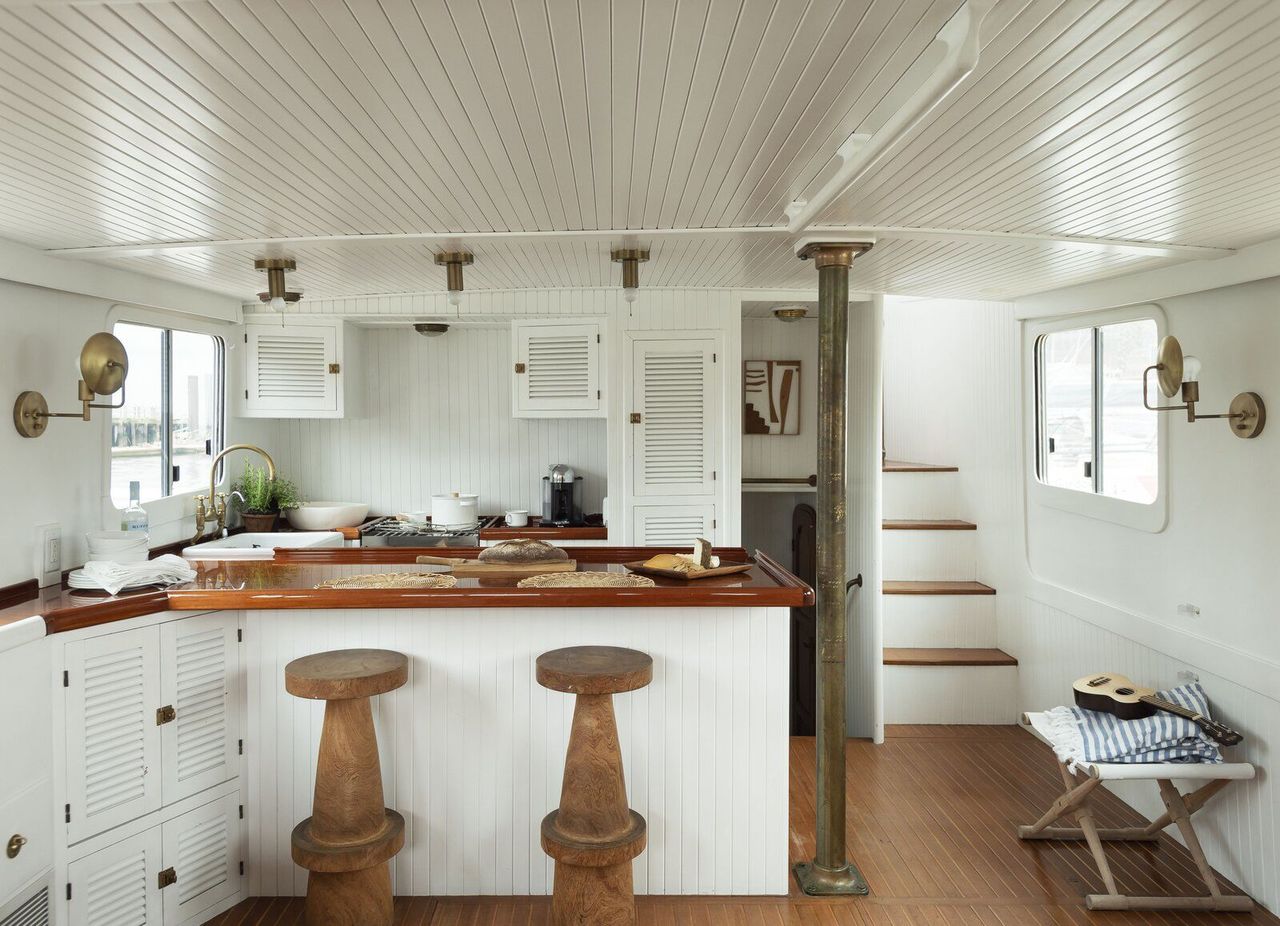 "I wanted to change the kitchen," Lyndsay says. "The cabinetry was too dark, so we wanted to lighten it up. At first, it was an orange wood-and we ended up painting it white to achieve this."

The stern-to-bow revamp took the couple nearly a year, and it involved rewiring electrical systems, restoring moldy and corroded parts, refinishing the teak and holly wood floors, and painting the interior in Farrow & Ball’s crisp Schoolhouse White. Brass details-from the light fixtures to the cabinet hardware-add a timeless, nautical touch to the old vessel.

"The biggest challenge was we had to redo the wiring, and we actually filled three 30-gallon garbage bags with old wiring. It had seen years and years of do-it-yourself fixes by previous owners," says Lyndsay, who serves as the company’s creative director. "We added a kitchen, redid the bathrooms, and added flushing toilets and a roof deck. We also put in a lounge, a bar, an extra bedroom, hidden storage, and lots of drawers everywhere." 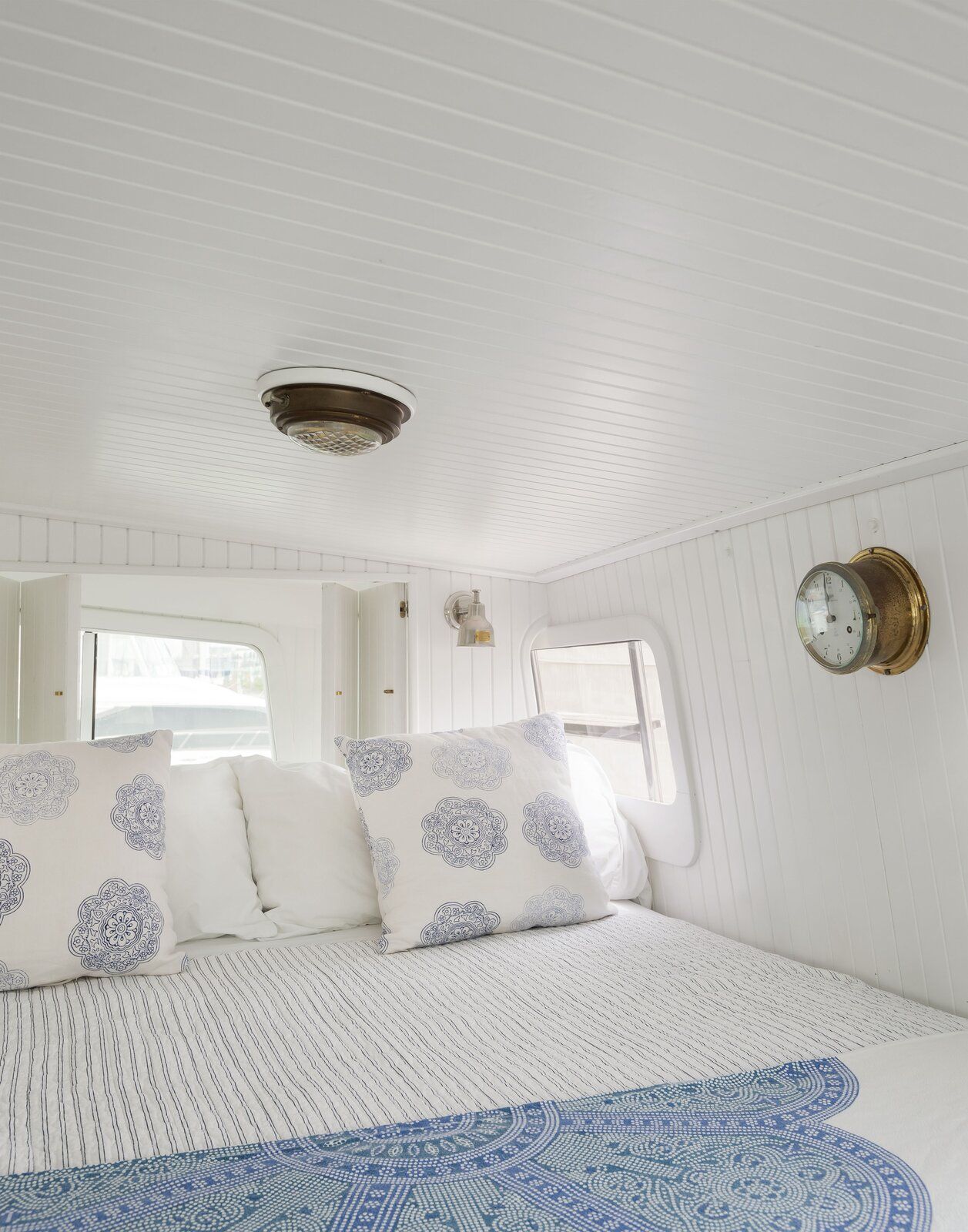 "Sleeping spaces are strategically configured to accommodate the family and guests," Lyndsay says. She made sure to design the berths with ample storage.

As a family of four, the Karols had to make the tugboat’s layout and amenities work for their lifestyle. Lyndsay went maximal with storage to keep bedrooms, bathrooms, and living spaces clear of clutter-and loose odds and ends stowed when out at sea.

"I loved the line and shape of the boat with all the staircases," Lyndsay says. "It is really a compact, brilliant use of space." 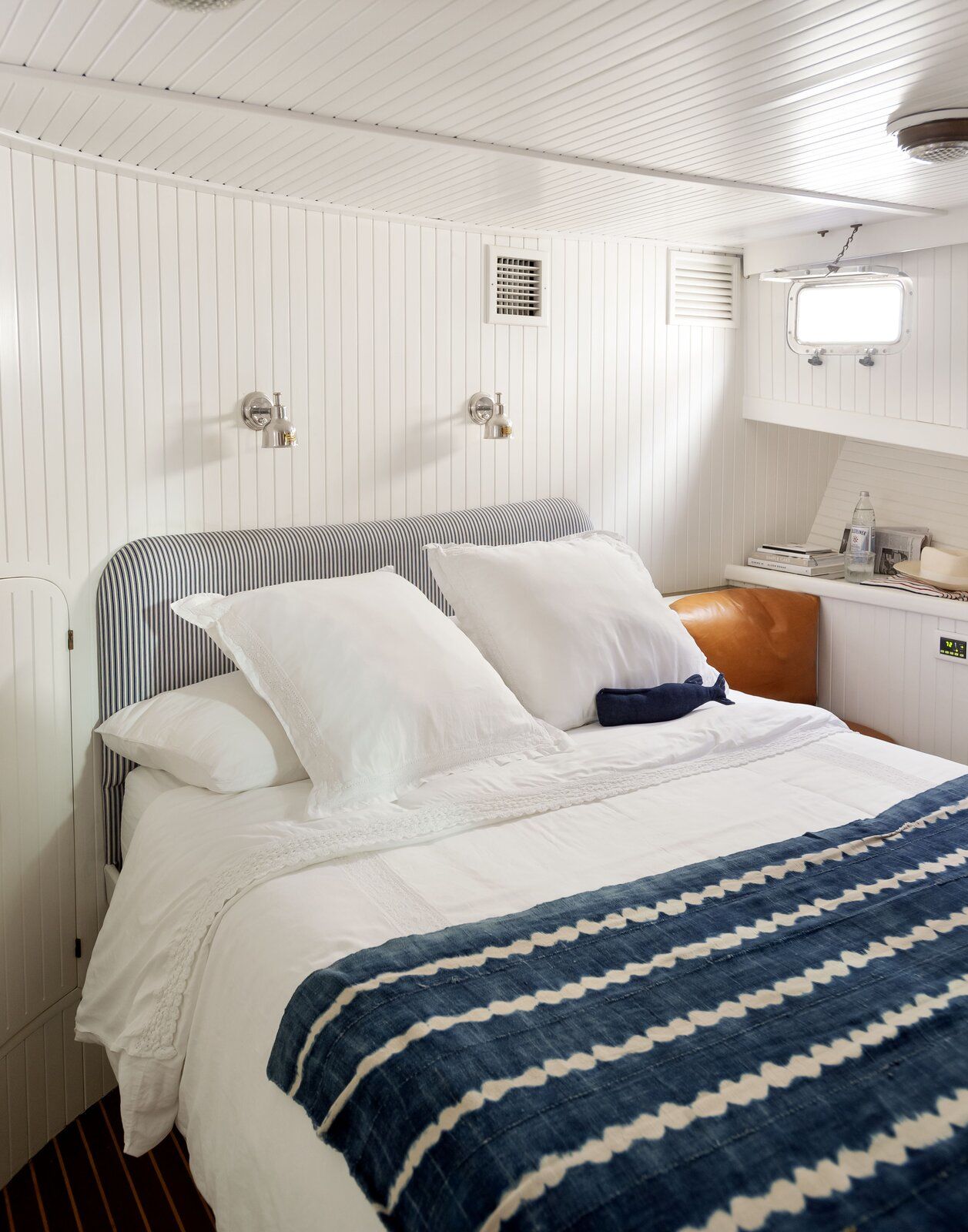 Workstead sconces and lighting can be seen throughout the vessel. "We added the reading lights and sconces to create a cozy atmosphere in the space," Lyndsay says. 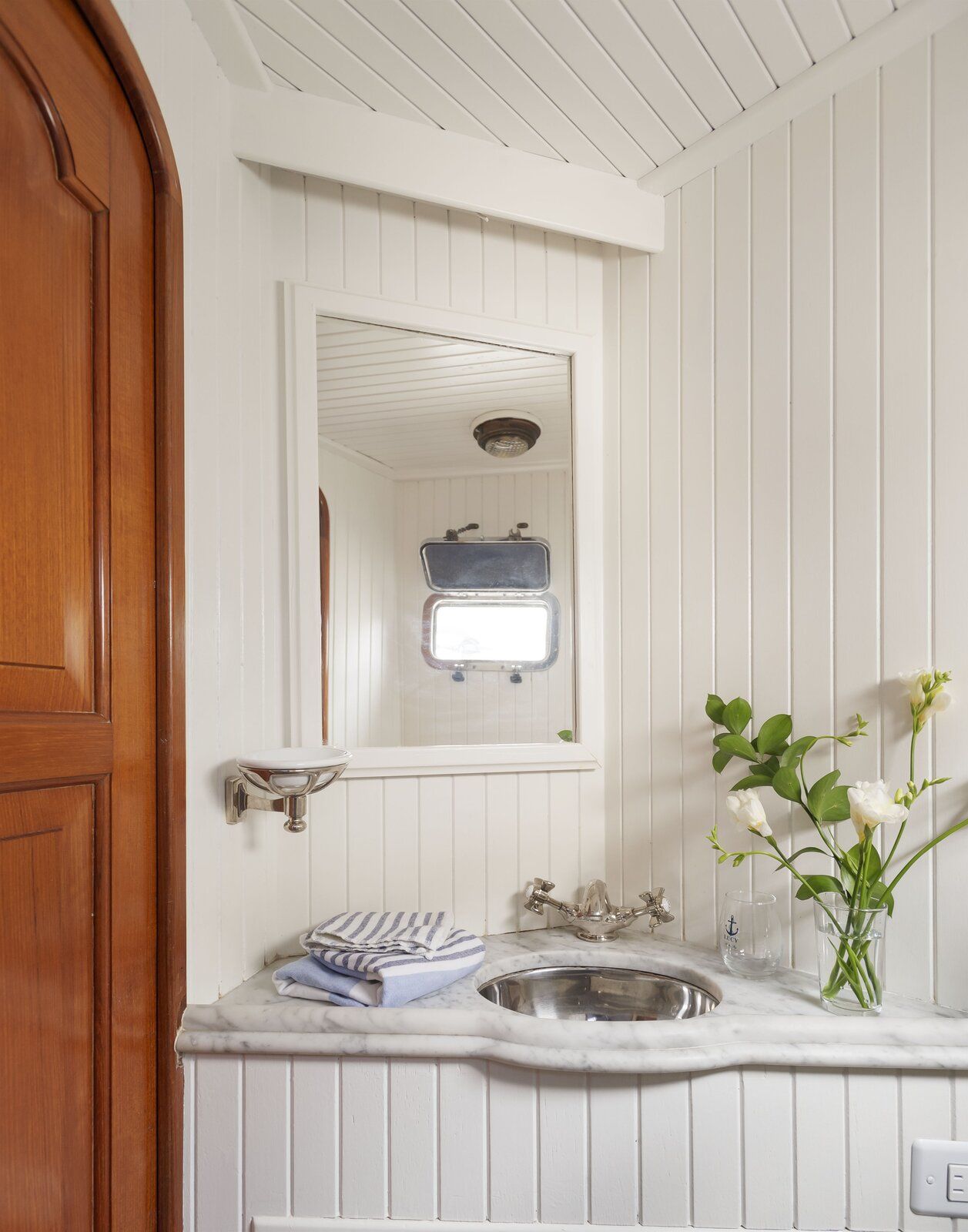 The renovation also added flushing toilets to the old vessel.

The couple reconfigured the main cabin as open-concept kitchen and living room, complete with a custom brass bar. It was also important to provide enough bunk space to accommodate friends and families on trips, so the pair created a third bedroom in the pilot’s house, behind the captain’s seat. 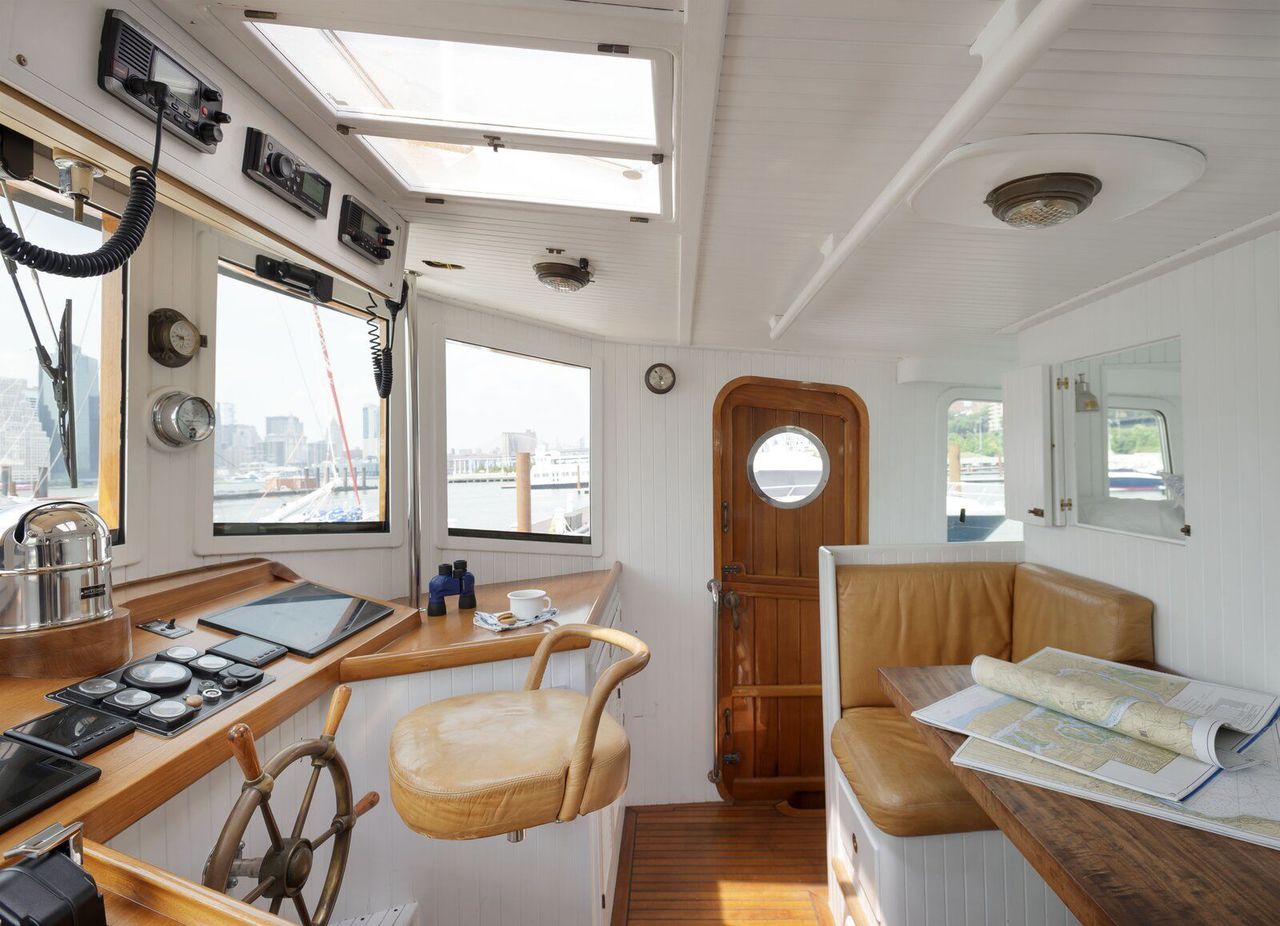 To maximize bunk space, the captain’s bench converts into an extra bed.

For additional square footage, they also added a teak roof deck with a swim ladder, an outdoor shower, and hammocks. The family now uses the space for sunbathing and al fresco dining.

"We take Lucy out three to four times a week from April to November," Lyndsay says. "Every year, we take a few longer trips to the Bahamas and Florida. We’ve also taken her to Charleston, and our longest trip was 15 days off the coast of Maine. We’ve even had friends out in Brooklyn sleep there for the night." 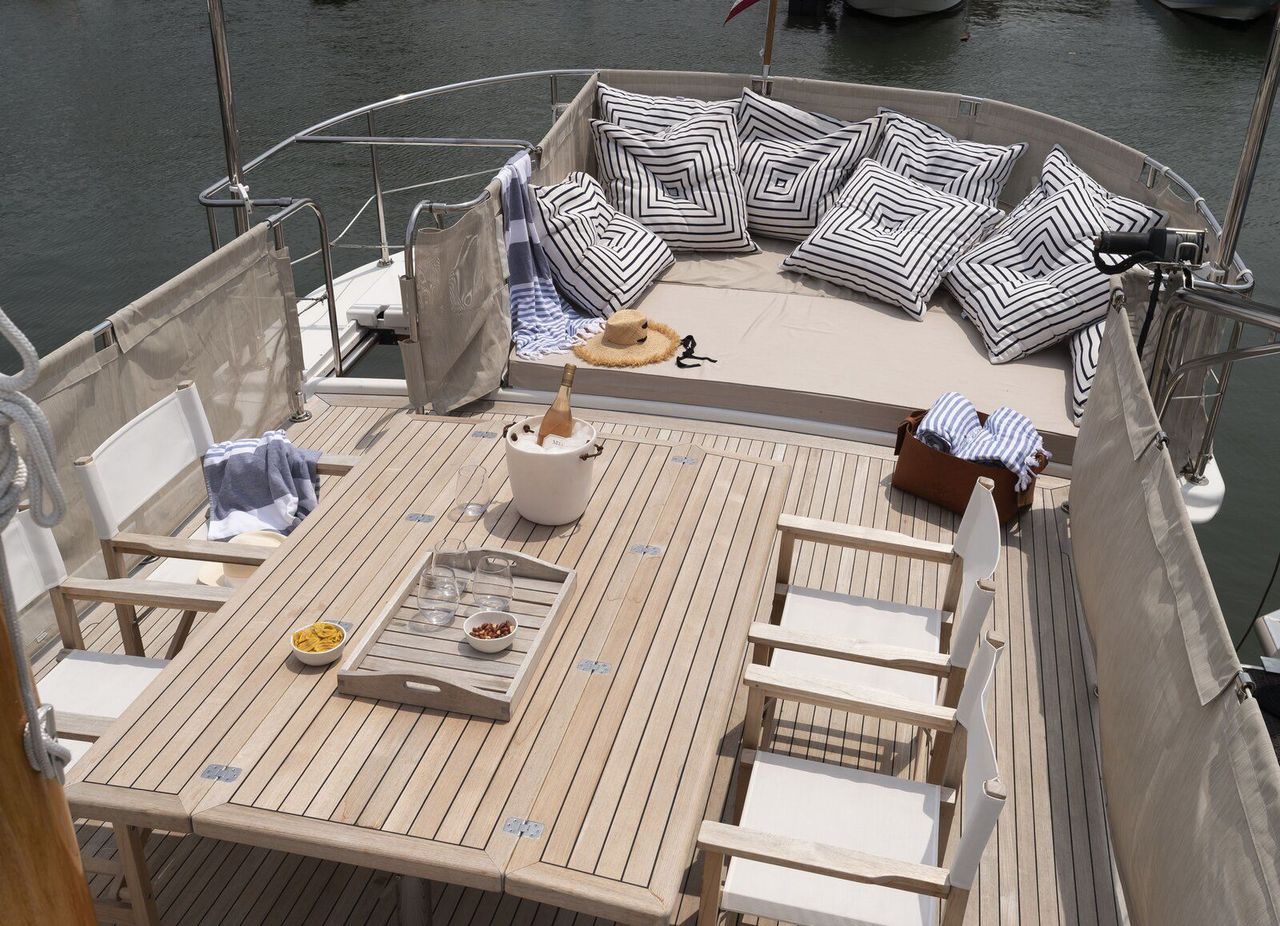 "The top of the boat was all storage, and I knew I wanted to make it into a larger outdoor space for entertaining," Lyndsay says. The new rooftop deck provides space for sunbathing and dining upstairs.

If the family longs for life on the open water, they’ll plan a sleepover on Lucy while she’s docked at One°15 Brooklyn Marina in Brooklyn Bridge Park. 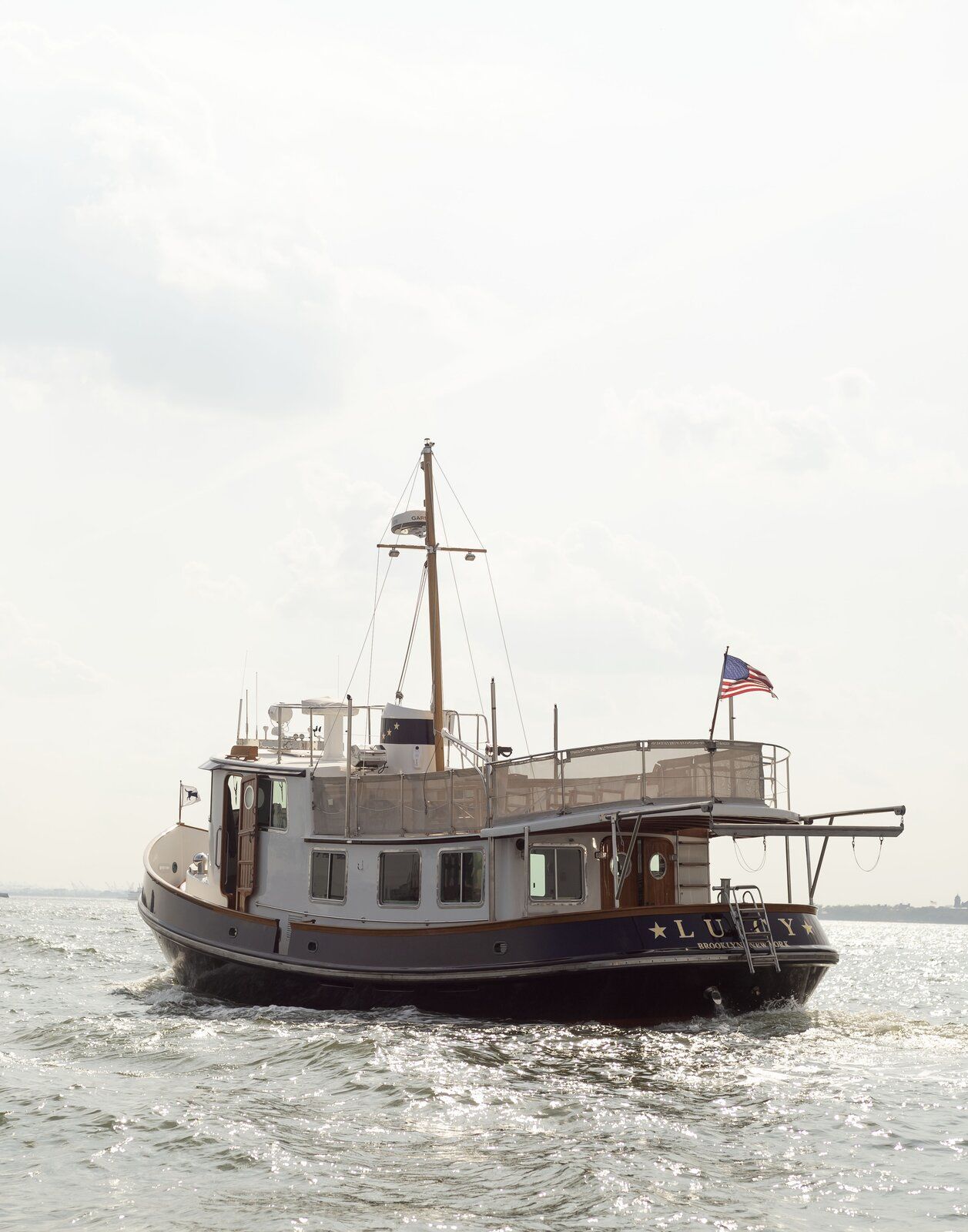 The renovation took nearly a full year, and the family now uses the boat for vacation getaways as far as the Bahamas.