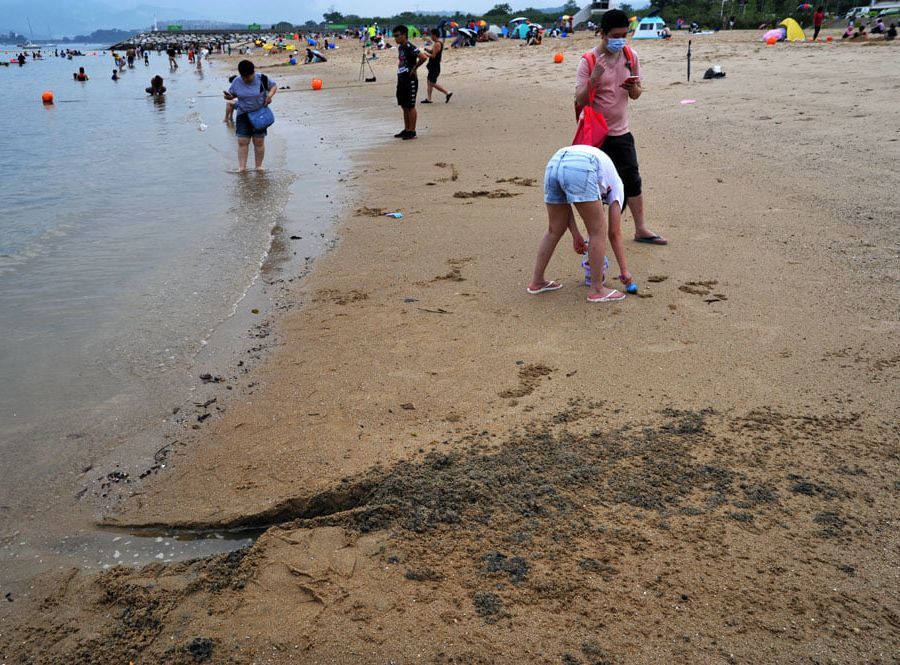 After heavy rain for several days, the artificial Lung Mei beach has turned partly black, according to pictures uploaded by Lung Mei Environmental Education Center.
The center posted pictures on Facebook today, showing white sand on the beach has been washed away to reveal black sand underneath.

“Back in 2013, an academic already pointed out Long Mei will become a black beach,” it wrote.

Hau pointed out that the weak water flow in Lung Mei makes it an oxygen-deficient fish tank. Microorganisms and bacteria release sulfur dioxide that makes the sand black and even emit a foul smell.

"It may turn to a black sand beach in less than a year," he predicted.

Hau also voiced concerns that the beach is not suitable for swimming as a lack of oxygen is conductive to E. coli. Swimmers which contacted it may develop allergies.

Toxic marine organisms such as amphinomidae and Plotosus lineatus were spotted under the water yesterday.

Tai Po District Council Member Ben Tam Yi-pui said that Lung Mei was considered an ecologically rich marine area that was not suitable for the construction of artificial beaches.

He suggested that the Leisure and Cultural Services Department should consider turning it into a marine ecology education center to avoid getting into the water.

The beach has been open for public use since June. Ninety cases of people being stung by sea urchins or jellyfish were recorded in the first five days of its opening.