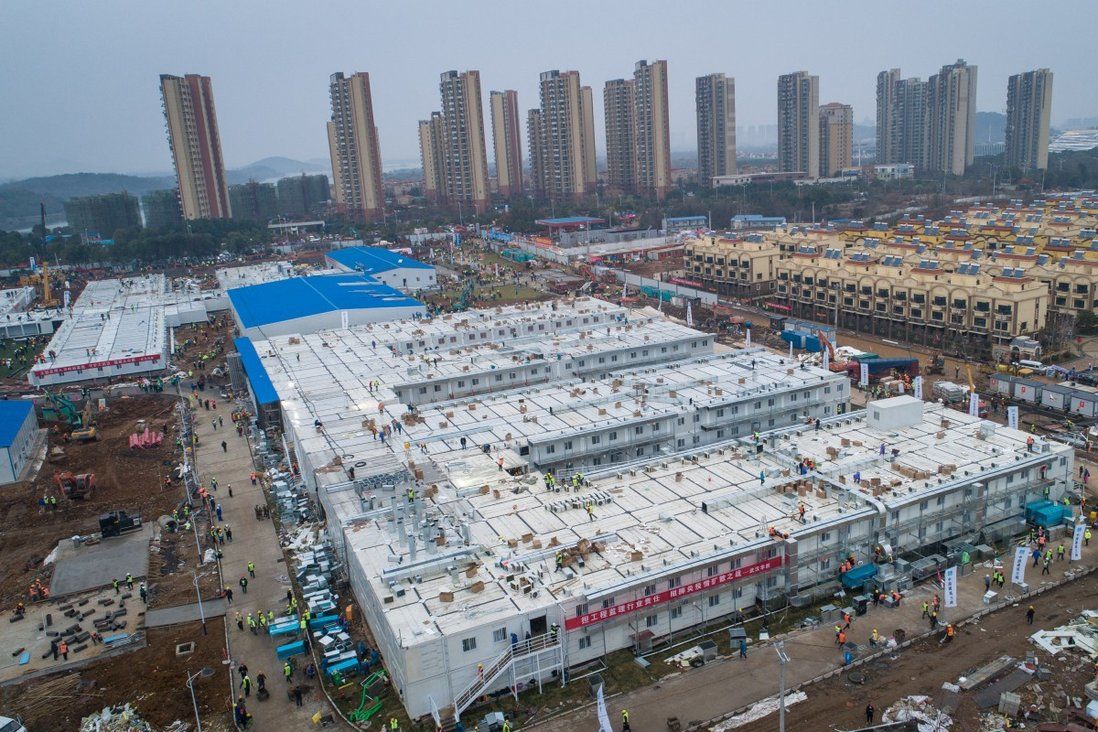 Sources say it will be ‘a scalable plan’ that will allow for capacity to be increased if outbreak worsens.
The location and the design of a new makeshift hospital to ramp up Hong Kong’s capacity to fight a worsening fifth wave of coronavirus infections is expected to be decided as early as next week, the Post has learned.

Sources said it would be “a scalable plan” that would allow for capacity to be increased should the outbreak spiral further out of control, but the choice of location would be partially decided by the initial size of the facility.

The hospital would be modelled on the type that first appeared in the mainland Chinese city of Wuhan at the start of the pandemic more than two years ago and which provided thousands of additional beds within just a few weeks, they said.

Hong Kong has been setting a string of records for the number of new Covid-19 infections, while 1,347 more cases were confirmed on Sunday. About 2,000 preliminary positive infections were also reported, also a new high.

The city’s official tally of confirmed cases stands at 22,980, with 221 related deaths.

City leader Carrie Lam Cheng Yuet-ngor held a high-level meeting on Sunday and decided the chiefs for health, mainland affairs, development, commerce and transport would lead the five task forces in working with mainland authorities to fight the pandemic, according to her office.

Personal protective equipment, masks and other medical supplies from the mainland would also be arriving “in batches” as early as next week.

Financial Secretary Paul Chan Mo-po, writing on his official blog on Sunday, lauded mainland authorities for their offer of help.

“The fifth wave of coronavirus infections has dragged society into a difficult battle, but we must make all efforts in fighting it with the goal and strategy of ‘dynamic zero’,” he wrote. “We need help to break the bottleneck on various fronts. The central government’s care, support and assistance will significantly boost our [efforts] in containing the epidemic as soon as possible.”

According to one insider, officials will hold further discussions on how to enhance Hong Kong’s “Leave Home Safe” risk-exposure app and make it more efficient for contact tracing.

The source also revealed that Guangdong was coordinating with testing and diagnostics service providers in Guangzhou and Shenzhen on ways to quickly ramp up Hong Kong’s capability. Guangzhou Kingmed Diagnostics was working on plans to increase its daily screening capacity from 70,000 to 200,000, while Sunrise Diagnostics would boost its own by 100,000 in two weeks, he added.

Guangzhou and Shenzhen border control checkpoints had also extended their opening hours to help ensure a supply of fresh goods to Hong Kong after a number of cross-border truck drivers tested positive for the virus, pushing up prices.

Asked whether Beijing or Guangdong authorities had required Hong Kong to stick to the mainland’s “dynamic zero-infection” approach, a source familiar with the matter said that while the strategy was “still the direction going forward”, local authorities had autonomy on how to achieve it and did not have to copy the model wholesale.

“The mainland side did not ask Hong Kong to follow the mainland’s approach exactly … Dynamic zero is the direction going forward. Other than that, its approach can be different depending on the local situation,” he said. “You won’t need to follow what Beijing and Shanghai did, but you need to move towards zero Covid.”

Federation of Trade Unions lawmaker Alice Mak Mei-kuen said that while the latest developments were positive, she hoped mainland authorities could also help solve the manpower shortage in Hong Kong.

“We need to break two major bottlenecks: in testing and beds. But even when we can increase the number of beds, we also need medical professionals to work in the medical facilities and take care of the patients,” she said. “So I hope that apart from helping with testing and collecting samples, we can also consider temporary registration measures to allow more mainland medical professionals to help us end this fifth wave.”

Lawmaker Chan Hok-fung, of the Democratic Alliance for the Betterment and Progress of Hong Kong, welcomed the extension of opening hours at border control checkpoints.

“I think mainland and Hong Kong officials have identified the core issues to be resolved,” he said. “Hong Kong people felt that the city’s government has done all it can and at times looked like it’s falling apart, so mainland authorities’ full support would restore people’s faith that we can overcome this crisis.”
#Coronavirus  #COVID-19  #Covid
Add Comment