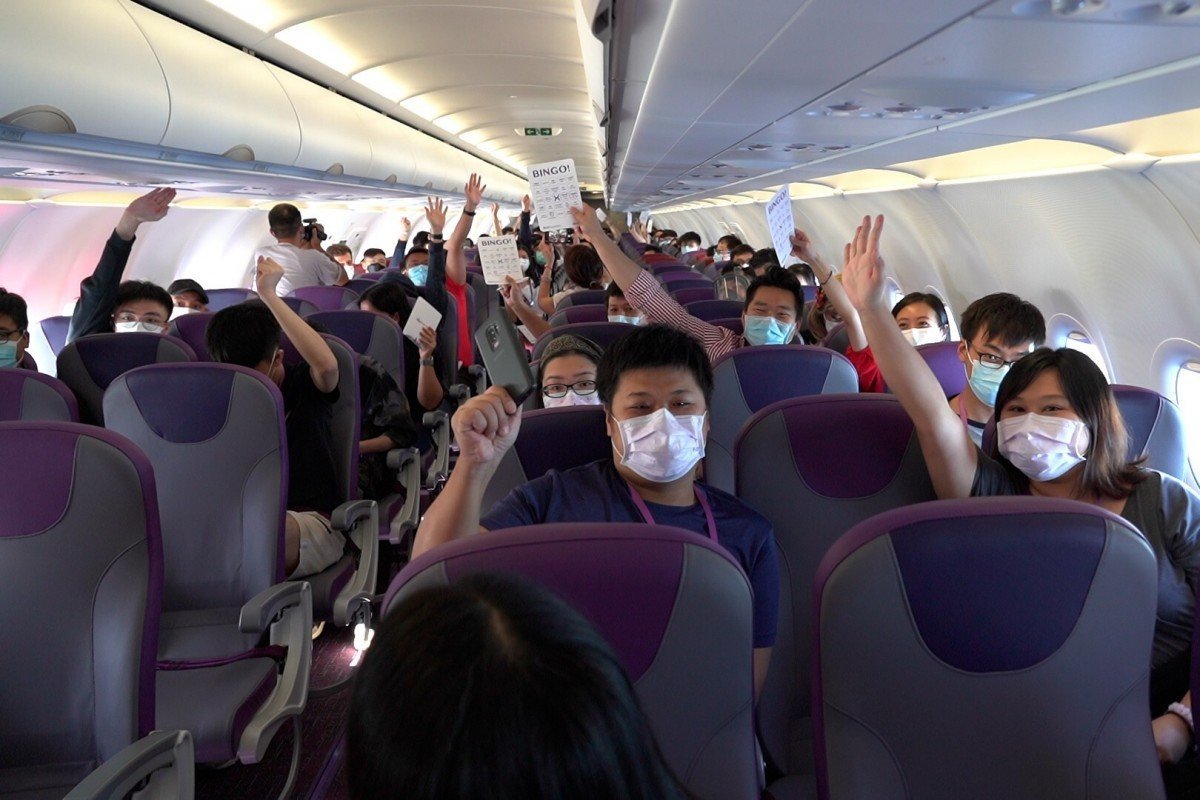 In the low-cost spirit there was no fanfare for passengers arriving at a near-empty Hong Kong airport on Sunday to check in for a special HK Express flight that did not leave the city’s airspace.

Still, despite the coronavirus pandemic and the halt to global travel it has brought, there was a brief sense of normalcy for the 112 people who got on the “flight to nowhere”.

Even so, the contrast from the pre-pandemic era of travel could not have been more stark: passengers were escorted through the airport terminal in single file and separated from other genuine travellers to a cordoned-off area of the airport terminal.

Guests were also separated on the plane by an empty middle seat. 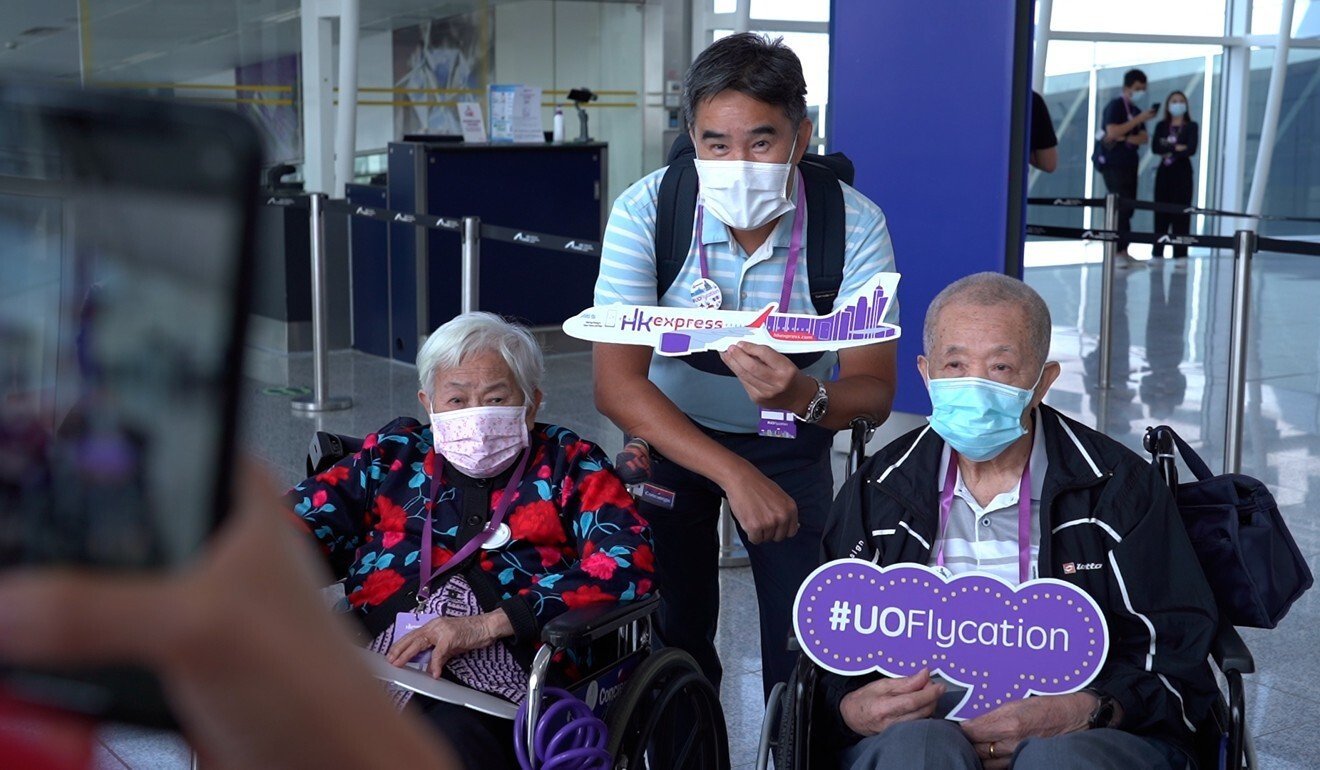 Passengers wait to get on board the ‘flight to nowhere’.

HK Express, Cathay Pacific’s budget airline, was the first to announce it would launch sightseeing flights around Hong Kong. But it was beaten by Hong Kong Airlines, which operated its flight over the city last week.

Around 360 tickets were snapped up by Hongkongers in 90 minutes when the announcement was made by the airline last month.

With 120 passengers booked to fly on Sunday, there were eight no-shows.

“I really miss the thrill of flying and the experience inside aeroplanes,” said Yannick Callicott, whose most recent flight was last Christmas to and from Los Angeles.

The 15-year-old student said being in the air gave him an adrenaline rush.

For Jeff Chan, 39, the joy of flying once more was tempered by the slight queasy feeling he experienced during the plane’s brisk ascent to 25,000 feet. The haze hanging over the city also ruined prime window views.

The flight, which lasted little more than an hour, flew to the south-western tip of Hong Kong airspace.

As the flight never left the city, travellers were given a special exemption from the 14 days of quarantine other arrivals face. Passengers were given special lanyards to wear around their necks, and were warned in advance to display it or risk mistakenly being sent to quarantine.

Airlines have resorted to special initiatives, in part to help raise some extra cash, after being devastated by the pandemic. 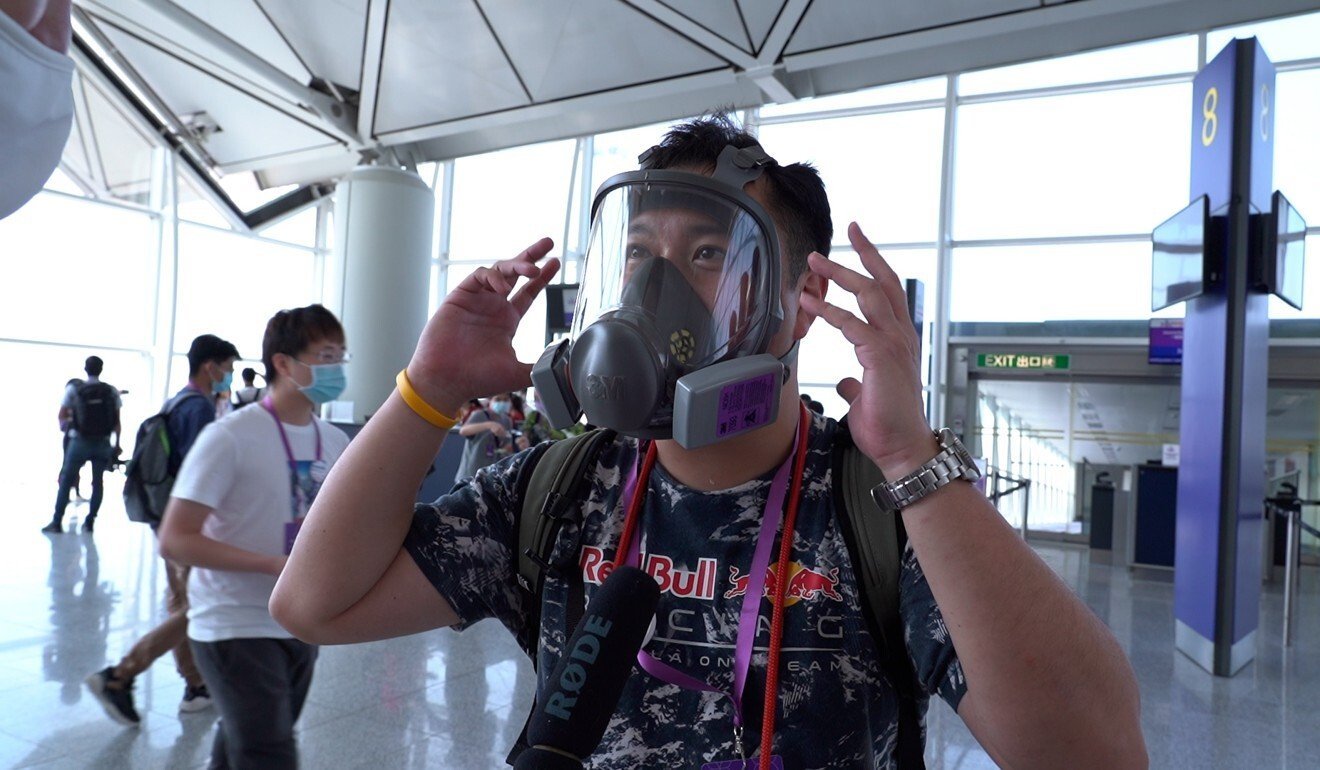 Patrick Poon gets ready to board the HK Express flight over Hong Kong.

The virus has destroyed international travel, grounded planes and triggered massive job cuts including 5,900 at Cathay Pacific, and the closure of Cathay Dragon.

Ben Hui Ping-man, 46, an airport worker, said he wanted to fly knowing it would “bring some happiness …[to] aviation workers, who have something to do”, rather than face losing their jobs.

As Sunday’s journey showed, people’s desire to fly again is strong, and among the passengers there was great anticipation at the possibility of a travel bubble with Singapore opening soon.

The city’s commerce minister, Edward Yau Tang-wah, said on Sunday there would be at least one a day between the two places by the end of this month.

“I’m waiting for the travel bubble to go to Singapore because I need to do some business over there,” Patrick Poon Hin-sun said.

The health-conscious 35-year-old, who wore a full-face respirator throughout the flight, said he was bored of being stuck in Hong Kong for more than six months.

On top of social distancing, HK Express has adapted to the pandemic by not selling food or drink, and will not for some time to come, depriving the carrier of a key revenue source.