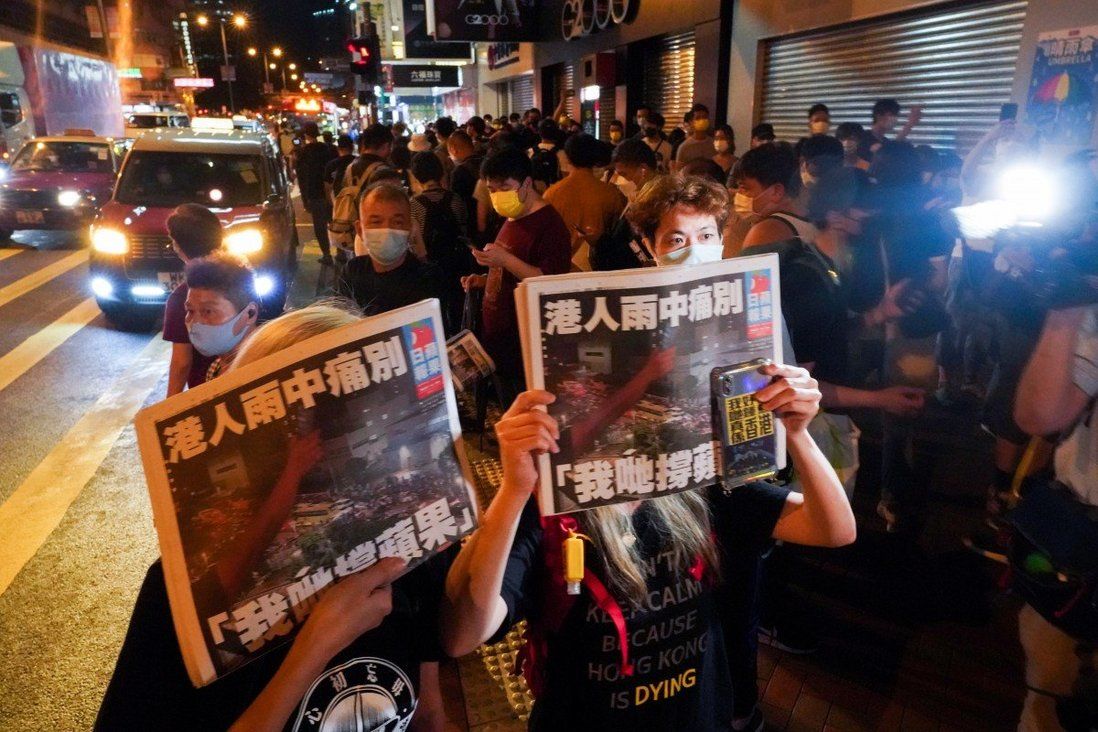 Hongkongers rushed overnight to buy one of a million copies of Apple Daily’s last-ever edition, which hit the streets in the early hours of Thursday to close
the final chapter of the tabloid-style newspaper’s 26 years in business.

As queues of customers stretched outside newsstands across Hong Kong, a round of applause erupted in the Apple Daily newsroom at 11.45pm to mark executive editor-in-chief Lam Man-chung sending off the last issue of the newspaper to the printing press.

“Keep it up, Apple Daily! Keep it up, Hong Kong!” staff chanted, as the paper’s followers outside its Tseung Kwan O headquarters whistled and clapped in support.

Several offices in the building could be seen descending into darkness as the media operation wound down for good. 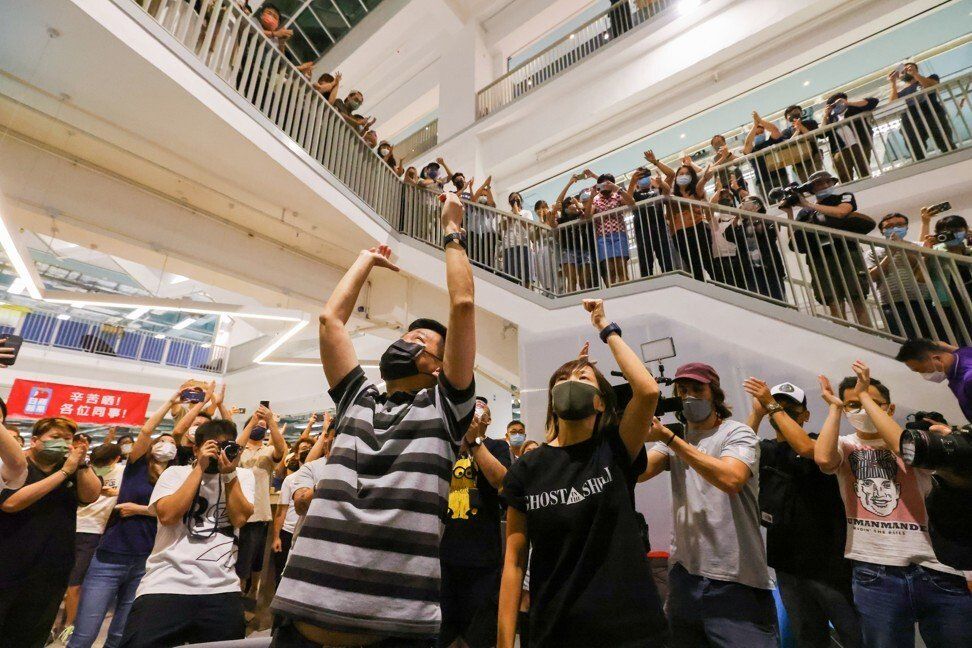 Apple Daily staff mark the end of an era.

In a nod to the 2019 unrest, some outside were wearing black and shouting “Liberate Hong Kong; revolution of our times”, a slogan popular with anti-government protesters. The chants soon fell silent.

In Mong Kok, hundreds of supporters started queuing as early as 10pm to get their hands on Apple Daily’s swansong issue, which eventually arrived at newspaper stands at about 12.55am. By midnight, dozens of people were queuing at a newsstand on Argyle Street.

Newspaper seller Michelle Man said she had ordered 8,000 copies, far more than usual, as she raised aloft a sign reading “Apple comes at 1.30am”.

Waiting since 10pm, Mary Cheung was one of the first in the queue and vowed to buy about 10 copies for herself and a friend.

As Cheung began her long wait, journalists in the Apple Daily newsroom were racing to pull together Thursday’s edition, feeding printing machines buzzing at the headquarters for the last time, after an internal decision in the afternoon to completely fold by midnight.

The 26-year-old newspaper, known for its anti-government stance, is Hong Kong’s first media outlet to cease operations since Beijing imposed the national security law in the city last June. 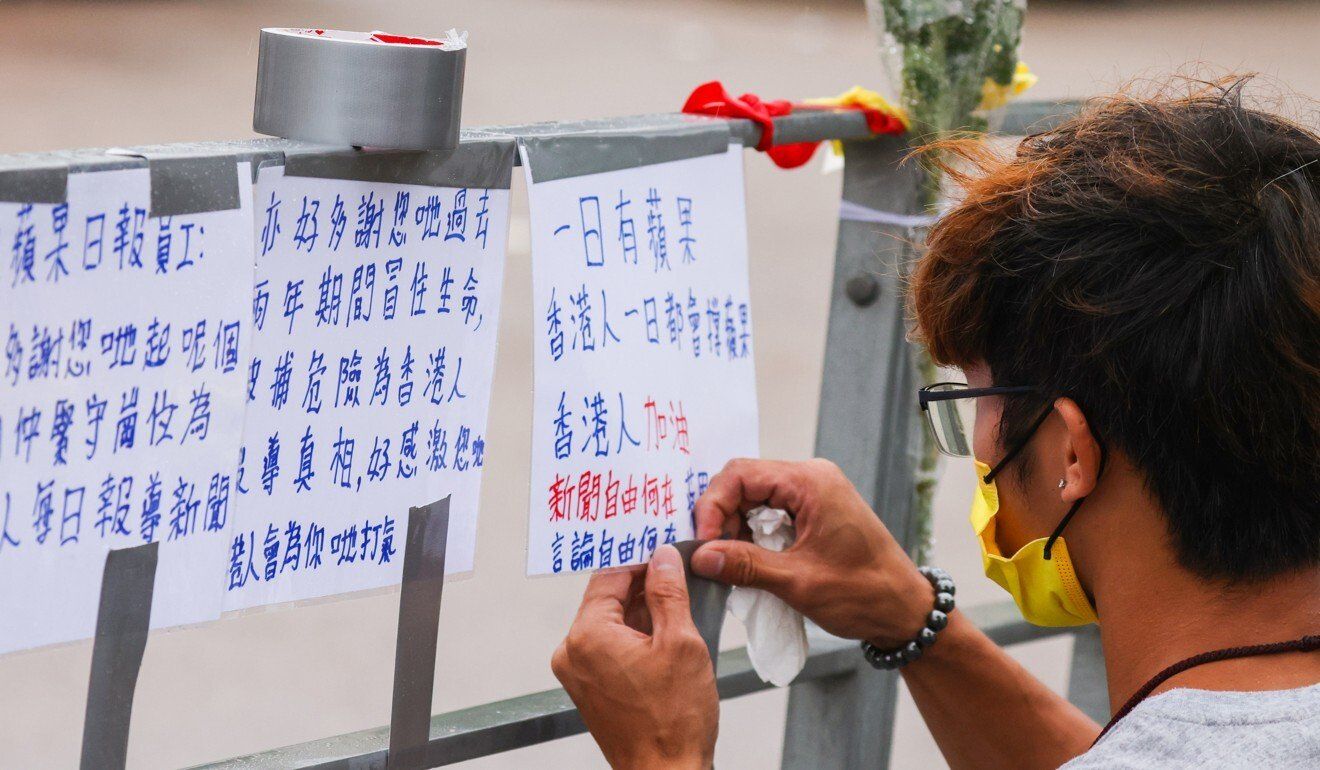 A supporter adds his note of encouragement at the site.

The shutdown came two days earlier than previously planned, as national security police, in a second round of operations in a week, detained the paper’s lead editorial writer on suspicion of conspiracy to collude with foreign forces on Wednesday morning.

As the printing press fired up, journalists hugged each other, holding back tears.

Associate publisher Chan Pui-man thanked her staff and the dozens of supporters who had braved the rain to gather outside.

Chan said she would on Thursday resign as the associate publisher of the newspaper, and would step down as a director of five related companies, taking effect on Friday.

She was among the five senior executives arrested by national security police last week, three of whom were released on bail without charge. The other two were charged with conspiring to collude with foreign forces and remanded in custody. 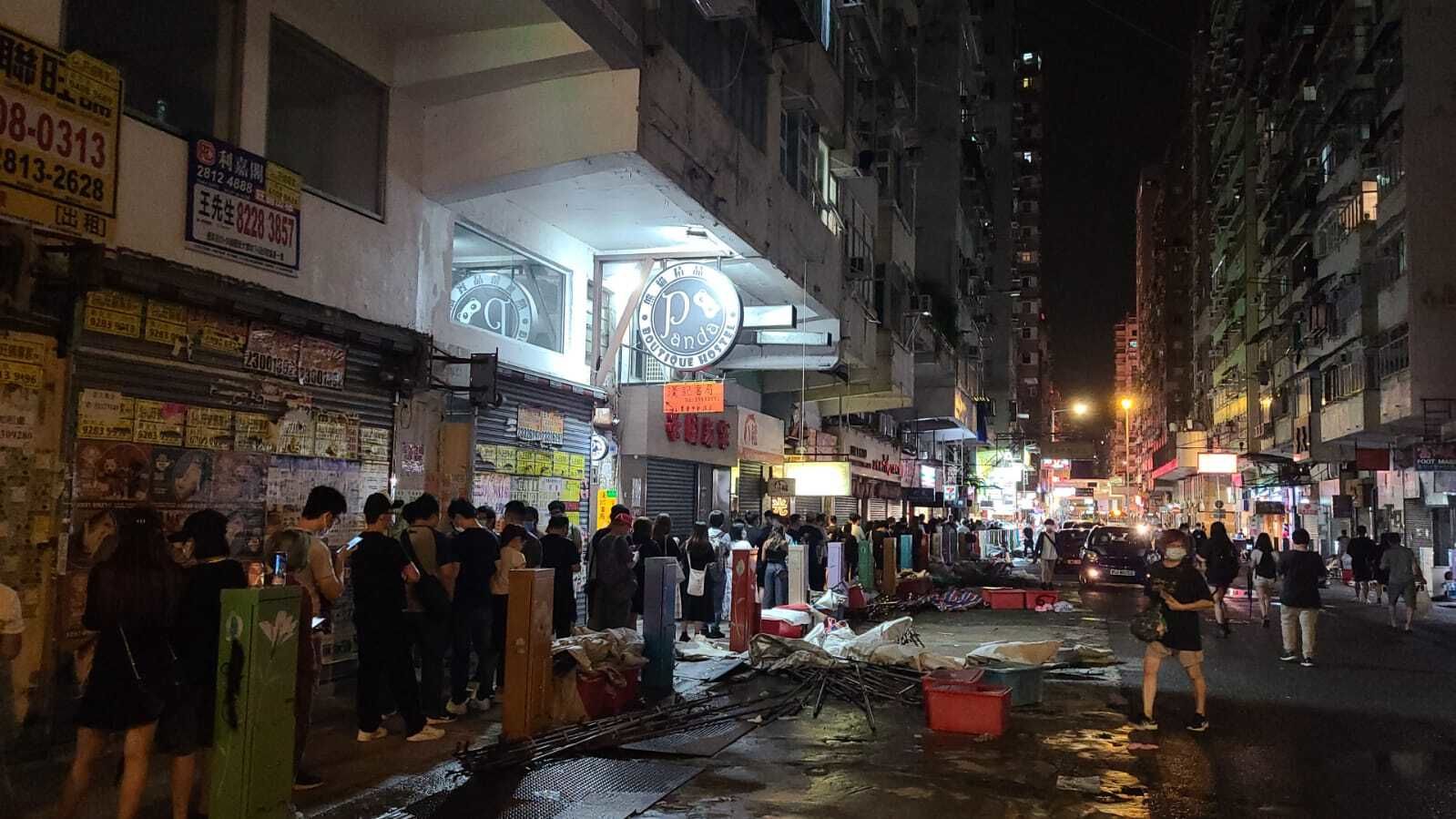 Despite a recent wave of resignations, the staff who stayed until the bitter end said they did so because their role at Apple Daily was so much more than a job, adding they did not want to miss seeing out the paper’s final moments.

Staff were sent boxes of food to enjoy on their last night, a manifestation of the affection many Hongkongers had for the publication.

Tammy Cheung, the paper’s deputy editor-in-chief who was in charge of the China desk, said almost all of her 30-strong staff had decided to stay to the end. 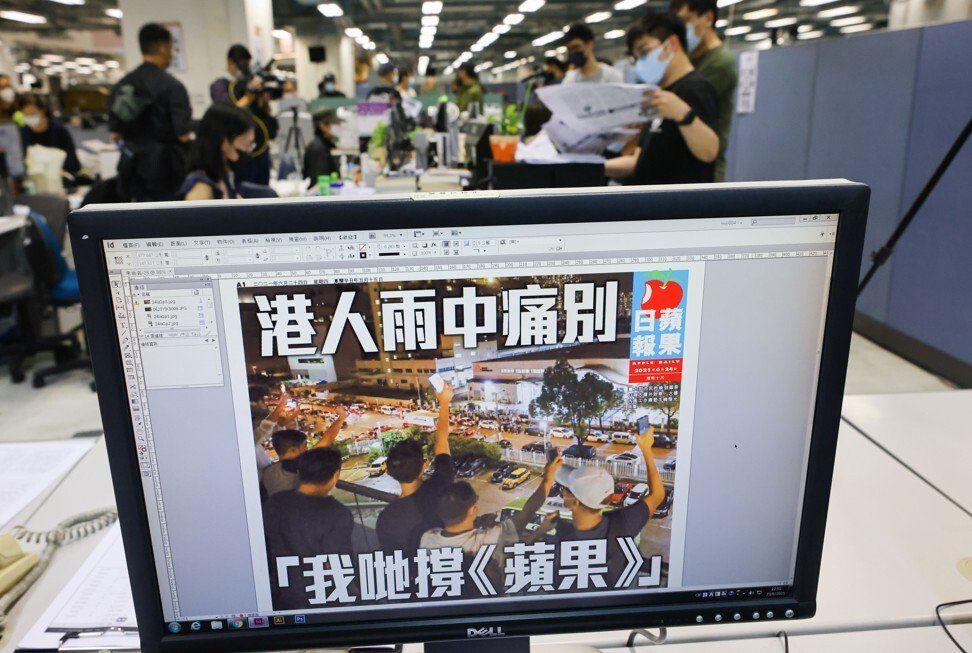 “I decided to stay here because this is my job, and I wanted to finish my job professionally,” said Cheung, 55.

“My message to my staff is that they must equip themselves properly, and continue the spirit of Apple Daily.”

Another journalist, Icy, who has worked at the paper for five years, recalled breaking down in tears when she was informed the paper would be no more.

“I was writing an article to bid farewell to the readers. I couldn’t stop crying when I heard about it,” she said. “This is not just a place I work at. This is my home.” 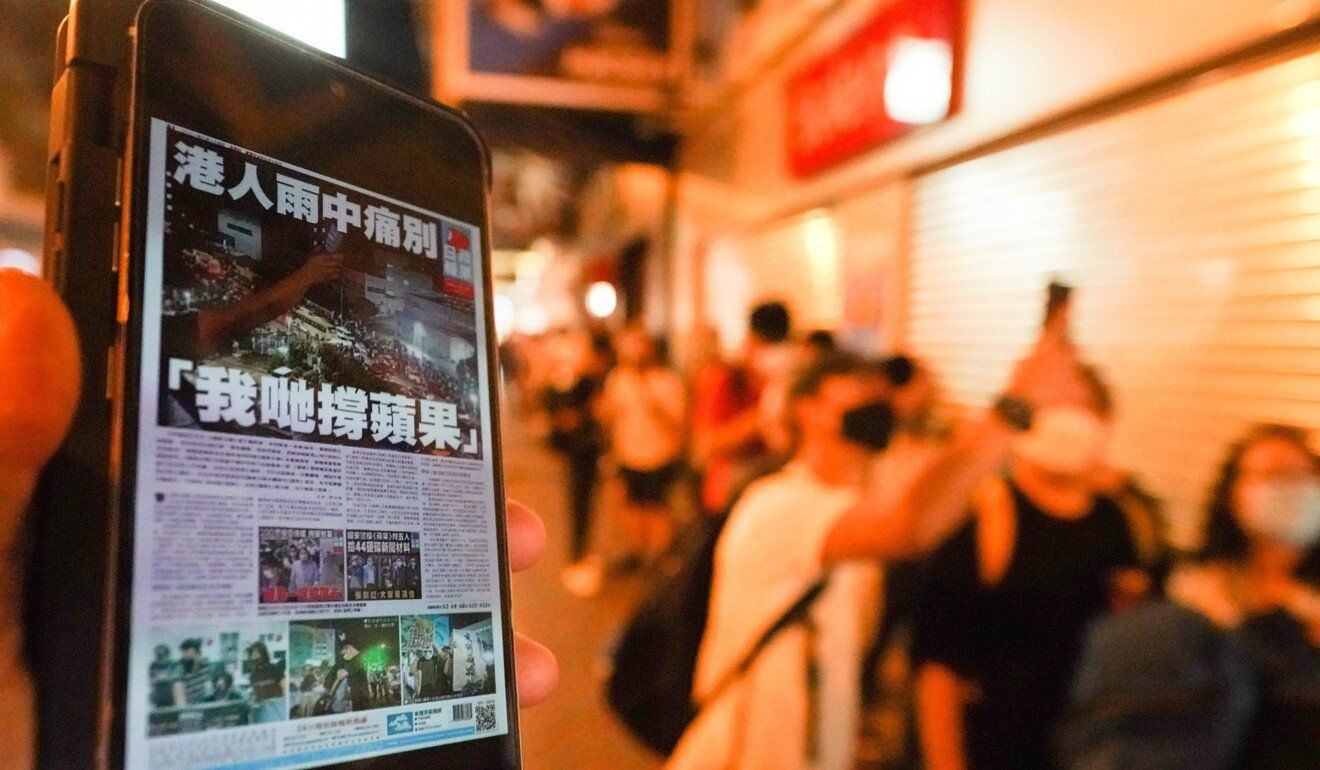 Some were prepared to wait hours in line to purchase a copy of Apple Daily.

A journalist who had worked on the paper for more than a decade also held a strong desire not to leave early.

“I don’t want to look back at this day and regret that I was not here until the very last day,” he said, adding he loved the job so much he was not worried about not getting paid.

“Here in Hong Kong, a newspaper can disappear just like that. What about the city’s core values? Will they disappear as well?” he said. “This is not just a job, it reflects the degree of freedom in the city.”

The paper’s designer, Dickson Ng, 55, was overwhelmed with emotion as he finished off the paper’s layout for one last time after 23 years at the newspaper.

“I am very touched that we’ve gone this far,” he said. “But I am sad that Hong Kong is going downhill.”

Soon after midnight, traffic police arrived to maintain order and divert traffic, which had been exceptionally busy, jammed with fleets of press cars rushing to cover the newspaper’s final hours.

About 12.20am, a group of Apple Daily staff emerged from the complex for group pictures and also waved at the paper’s supporters. 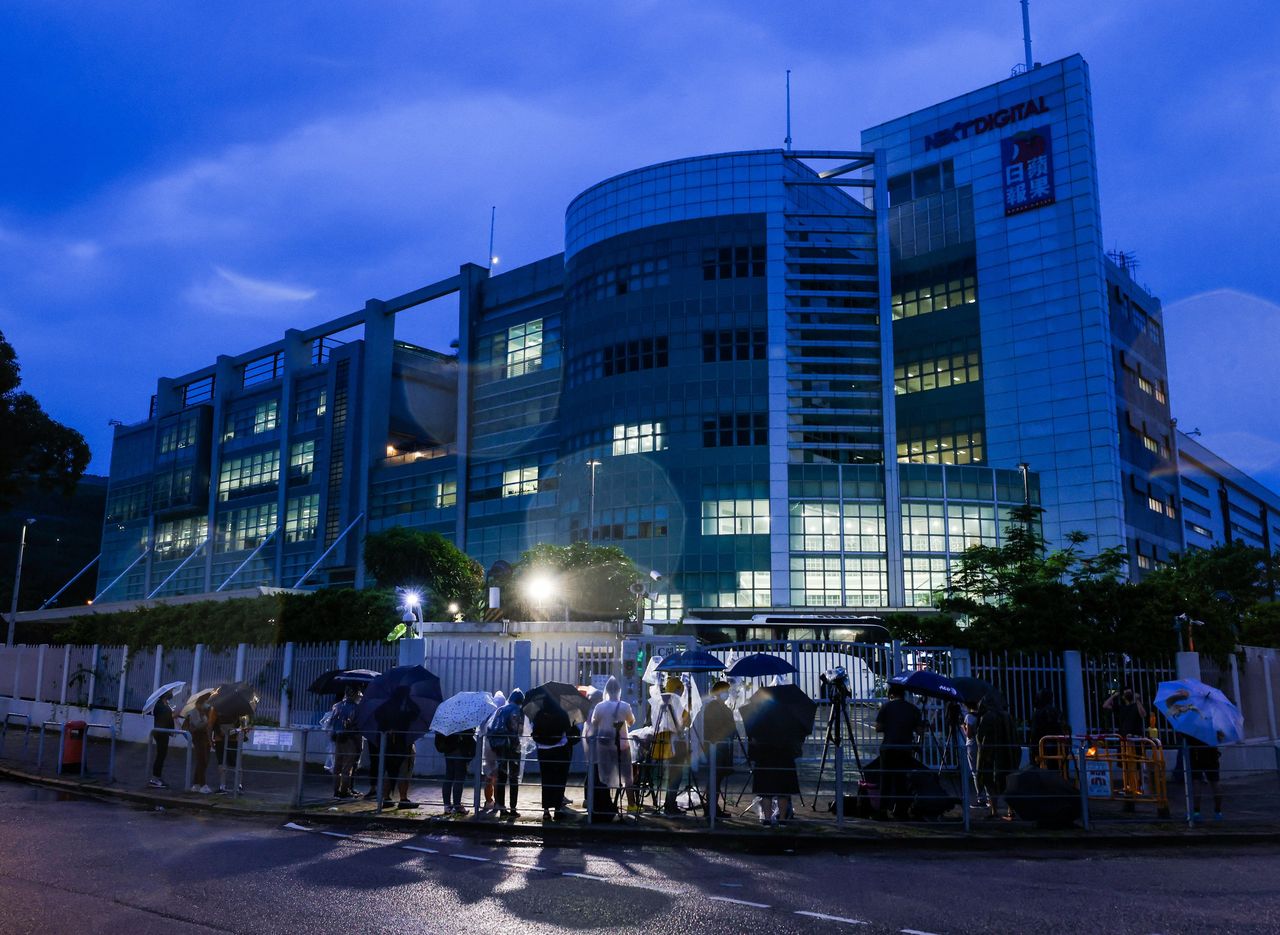 Shortly afterwards, several Apple Daily members of staff including journalists handed out free copies of the final edition to supporters waiting at the main gate.

There was a scramble to grab a copy, although order was quickly restored.

Inside the headquarters when the print version was being put to bed, the usually bustling newsroom was even more packed as reporters and photographers from local and overseas media were invited to go inside to witness the production of the final issue.

The front page of the paper’s last edition features a photo of supporters flashing their smartphone lights at the newspaper’s office. The headline reads: “Hongkongers bid painful farewell in rain”, alongside the quote “We support Apple”.

A special supplement within the publication carries the headline “Goodbye” and displays a montage of the paper’s previous front pages, as well as a letter to Hongkongers. 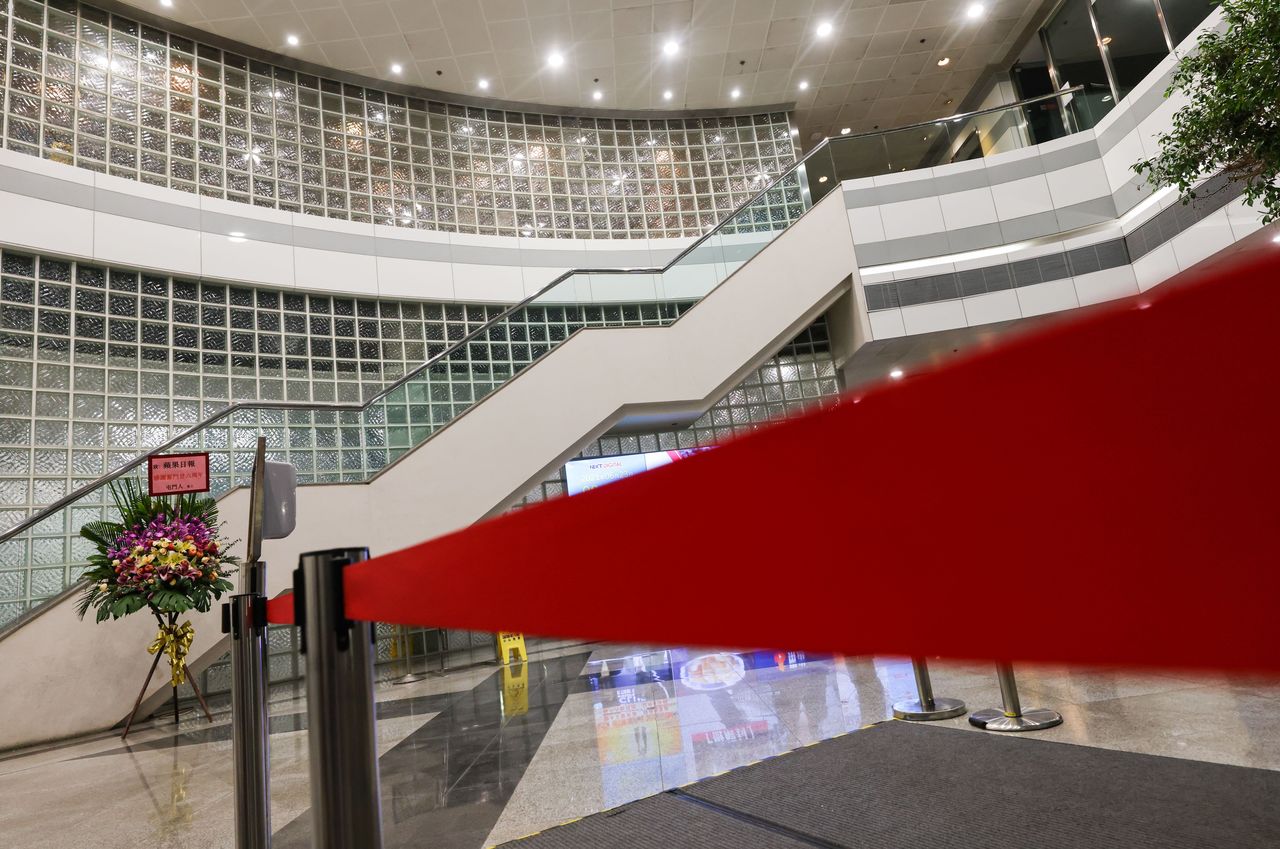 Flowers at the lobby of the Apple Daily office.

Earlier in the day, an Apple Daily veteran reporter at its features desk said: “An ominous sentiment descended over us early in the day, as we were warned against coming back to office to avoid another round of police raids.”

According to him, when the board of directors of parent company Next Digital decided its fate at 3pm, the newsroom was already largely empty as most editorial staff were either working outside or at home.

“My first feeling was – I won’t have a chance to finish my last two interviews scheduled on Thursday for my last story,” he said. “My whole team was calm. The closure was long expected.”

A political journalist with Apple Daily for more than 10 years said the latest news of the closure hit him while he was covering regular meetings at the Legislative Council.

“People around me kept asking me to quit out of safety concerns. I struggled a lot and decided to stay till the last minute. I was actually relieved that I could spend the last day of my life in journalism covering legislative matters. I have enjoyed this for many years,” he said.

Another reporter who has worked for the city news section of Apple Daily for more than a decade said she understood why colleagues wanted the paper to cease operations as soon as possible after news of the latest arrest.

“We can’t rule out that there will be more arrests to force us to close sooner,” she said, adding that the government was “not acting on common sense”. 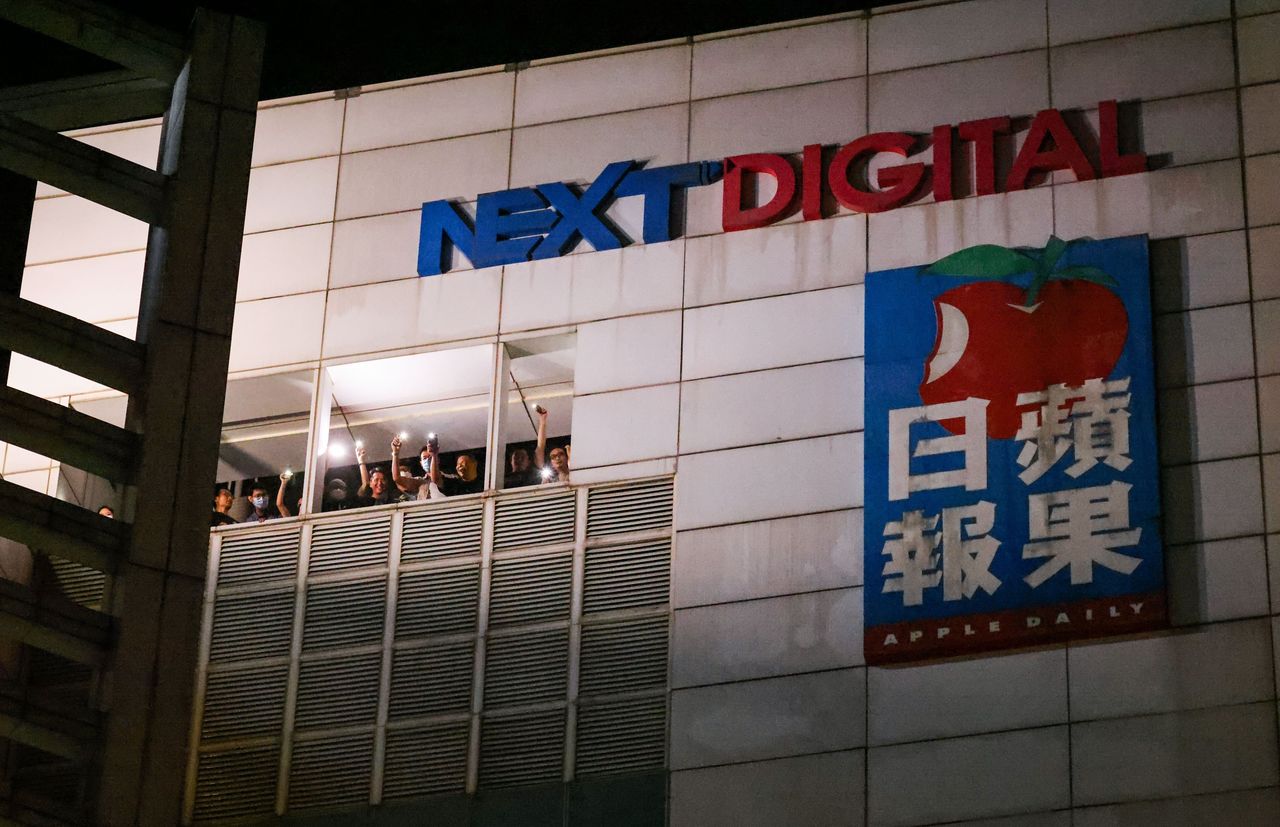 She also said it had been hard for those remaining to sustain operations in the wake of an exodus of colleagues, referring to the many who had resigned recently.

At the building’s lobby, flower tributes from Tuen Mun supporters were displayed to celebrate the paper’s 26th anniversary, which was on Sunday.

Earlier in the day, outside the Tseung Kwan O building, supporters and readers kept gathering once news spread of the publication’s early demise.

Three friends who said they had been reading the newspaper since its first issue 26 years ago came to bid farewell, claiming they were also saying goodbye to press freedom in the city.

One of them, surnamed Hui, said: “There is not one newspaper that will dare to speak out after this. This is the end of press freedom.”

Another reader in her forties, who travelled two hours with her husband to visit the site, said: “We read the newspaper every night so it is really frustrating and upsetting, but what can we do? We are just ordinary citizens.

“I just hope I can come here on the last day, see the building and take some photos to commemorate.”

Some laid flowers outside the complex while others left notes. One note read: “Using different ways to change the world, Apple Daily has always been special … We will wait for your return.”

Another loyal reader, accompanied by her son, said: “I brought him here today to witness a historic moment.”