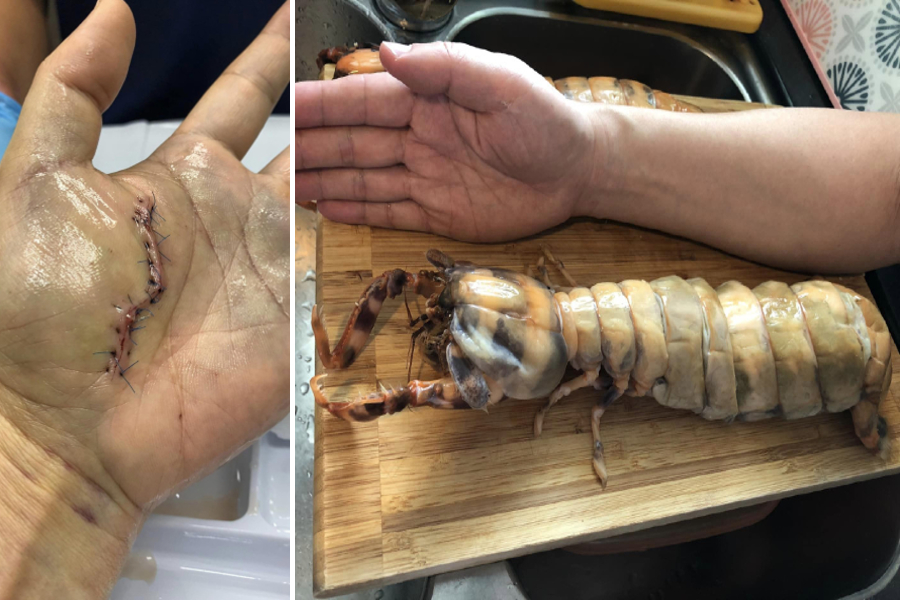 A netizen learned a valuable lesson on exercising caution when handling seafood after a gigantic mantis shrimp, as long as an adult's forearm, gave him a long scar when taking photos.
The netizen surnamed Yip shared on Facebook Sunday a picture of a long scar and the stitches on his left palm after being attacked by the mantis shrimp.

He told netizens he was wearing oyster-shucking gloves and was trying to grab the shrimp for some photos at the time. He also said he had been discharged from the hospital already.

According to Yip's photos, the shrimp was as long as his forearm. Yip hoped his experience could serve as a reminder for other seafood lovers to exercise caution. Many wished Yip a speedy recovery and recalled similar incidents they had heard of.

According to the Centre for Health Protection, having an open wound exposed to seawater and consuming raw or undercooked seafood contaminated with vibrio vulnificus – a bacteria present naturally in warm seawater – may result in necrotizing fasciitis, commonly known as “flesh-eating infection.”

In June 2012, the CHP recorded two deaths related to infections of vibrio vulnificus. Both deceased patients suffered from chronic diseases, and one had eaten raw mantis shrimp.

"In Hong Kong, the case fatality rate of vibrio vulnificus-associated necrotising fasciitis is about 30 percent," the CHP said.

Appropriate antibiotics given promptly are needed to kill the bacteria. In order to stop the “flesh-eating infection” from spreading, surgery, such as the removal of dead tissue or amputation of the limb, may be required. Some patients may require intensive care.

The CHP called on citizens to be careful with sharp parts of seafood and wear protective gloves when handling raw shellfish or other seafood.