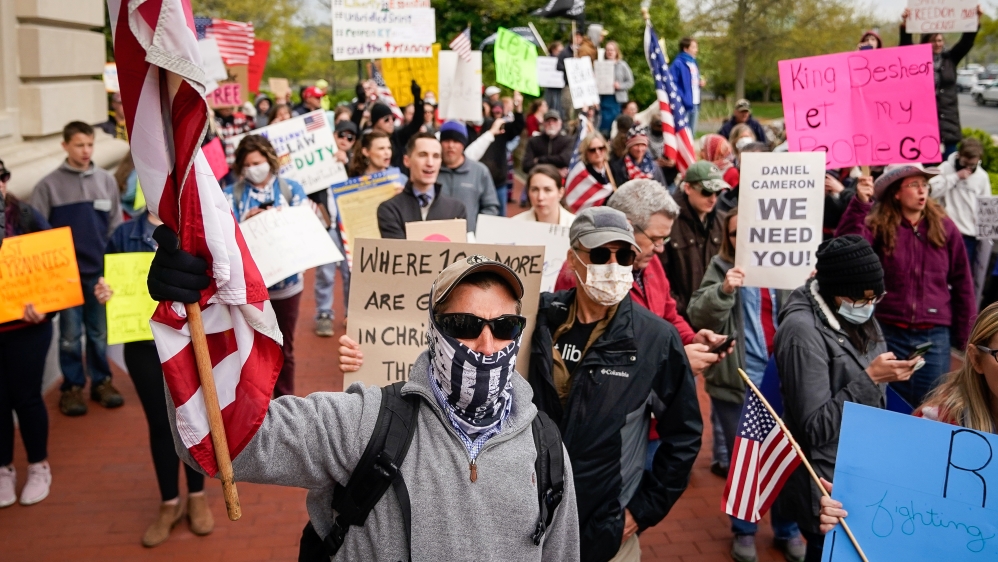 After saying governors would decide when to reopen, Trump urges supporters to 'LIBERATE' some states led by Democrats.

In a provocative series of tweets on Friday, United States President Donald Trump appeared to support protest movements popping up around the country calling for an immediate end to the lockdowns imposed on Americans in an order to contain the coronavirus pandemic.

Trump began his tirade with a call to "LIBERATE MINNESOTA". He quickly followed with two more missives calling for similar action in Michigan and Virginia. All three states are currently headed by Democratic governors, and Michigan is considered crucial to the president's re-election bid in the November general election.

LIBERATE VIRGINIA, and save your great 2nd Amendment. It is under siege!

Trump's tweet about Virginia, a state once solidly Republican that turned Democratic during the 2018 midterm elections, included a call to "save your great 2nd Amendment". The state's Governor, Ralph Northam, signed new laws last week that expanded background checks and imposed new limits on gun purchases.

"I think they listen to me," Trump said of the anti-lockdown protestors. "They seem to be protesters that like me and respect this opinion. And my opinion is the same as just about all of the governors."

"He is putting millions of people in danger of contracting COVID-19. His unhinged rantings and calls for people to “liberate” states could also lead to violence. We’ve seen it before," Inslee tweeted.

"The president is fomenting domestic rebellion and spreading lies - even while his own administration says the virus is real, it is deadly and we have a long way to go before restrictions can be lifted," he added.

Conservative media hosts and some Republican leaders have in recent days started to bristle against the continued shutdowns, arguing that the damage being done to the economy and citizens' livelihoods outweighs the strain being placed on the healthcare system.

In Minnesota, protesters in that state planned to gather in front of the governor's mansion on Friday to protest against a stay-at-home order that has been in place since March 25 and businesses deemed non-essential have been closed since March 16.

In a social media post, the group behind the protest - calling itself "Liberate Minnesota" - wrote, "Minnesota citizens now is the time to demand Governor [Tim] Walz and our state legislators end this lock down! Thousands of lives are being destroyed right now. It is not the governor's place to restrict free movement of Minnesota citizens!"

Also on Friday, residents of the state of New Jersey paraded a line of cars in front of Governor Phil Murphy's office in the state capital, Trenton, chanting "no more fear" and "where is my bill of rights".

Similar protests have popped up in states around the country, including Michigan, Ohio, Kentucky, Utah, and North Carolina. Mixed in among the US flags and hand-scrawled protest signs at most of the locations have been political signs supporting Trump and Vice President Mike Pence's re-election campaign.

Protesters in Kentucky yelled, "Open up Kentucky" and "You're not a king, we won't kiss your ring" in the Kentucky capital of Frankfort, where Governor Andy Beshear, also a Democrat, was attempting to hold a news briefing on Wednesday.

In Utah, headed by Republican Governor Gary Herbert, the protesters called that state's attempts to contain the coronavirus pandemic unconstitutional.

"The government, at all levels, has overstepped its authority in their request to 'protect' Americans from a virus," Mary Burkett, a Republican candidate for Utah's 2nd congressional district who participated in the demonstration, said in a news release. "The American citizen is perfectly capable of deciding how to best protect themselves."

The protests are ramping up just as a number of governors, including some of those targeted by Trump on Friday, begin to announce an easing of the restrictions. Texas Governor Greg Abbott announced on Friday that schools would remain closed the rest of the academic year, but that some businesses would be allowed to reopen gradually starting next week.

In Michigan, Governor Gretchen Whitmer said on Friday that she hoped to loosen some of the strictest lockdowns in the nation beginning in two weeks, and Minnesota's Walz announced that golf courses and a number of other outdoor activities, along with the businesses that support them, could reopen on Saturday morning.
Add Comment