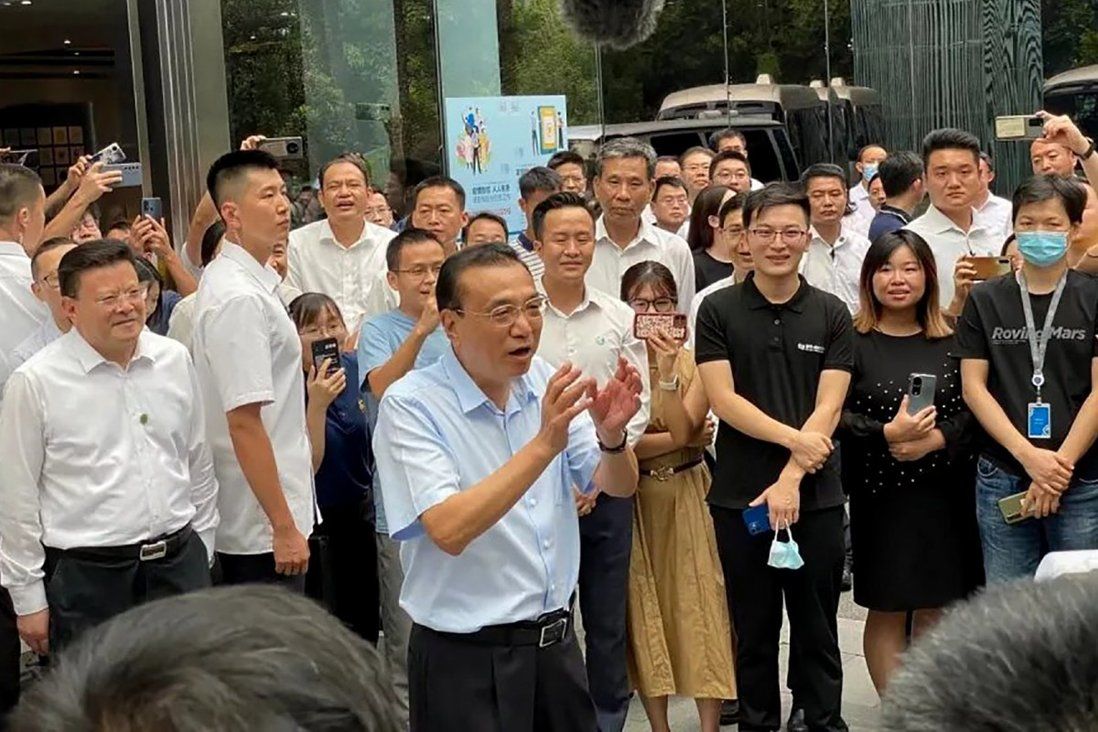 Chinese Premier Li Keqiang visited the southern tech hub of Shenzhen on Tuesday to again call on some of the country’s most dynamic areas to “shoulder greater responsibility” in stabilising the sluggish economy.

The trip to the province of Guangdong comes ahead a Politburo meeting at the end of this month, where the Communist Party’s inner circle will discuss the biggest challenges facing the country.

Analysts said the trip could be a fact-finding mission for the meeting amid worrying signs of economic cooling.

In a meeting in person with leaders from Guangdong and via video link with provincial chiefs from Jiangsu, Zhejiang, Shandong, Henan and Sichuan, Li said authorities should make full use of government policies and safeguard market drivers to stabilise the economy and ensure employment for migrant workers. The efforts would also help boost government revenue, he said.

The call came a month after a similar meeting in which Li urged the leaders of five of the most affluent provinces to “exhaust all possible means” to stabilise production and jobs as China reached a “critical point” in its economic recovery from the coronavirus pandemic.

Top cadres from Guangdong, Jiangsu, Zhejiang took part in both meetings, but those from Shanghai and Fujian province were not present on Tuesday.

Li is the first member of the Politburo Standing Committee to make a public appearance since early August when most top leaders disappeared from public view for the annual retreat at the seaside resort of Beidaihe.

Beidaihe in Hebei province used to be the backdrop for annual private gatherings of top leaders.

But the retreat has become less politically charged, with Xi formalising the party’s decision making process and party elders unwilling to travel because of the pandemic.

In Shenzhen on Tuesday, Li called for sustainable momentum in the economic recovery.

“[Our] economy stabilised and rebounded in June, and the pace of growth continued in July. But there are slight fluctuations. [We must] keep up the momentum of recovery, heighten the sense of urgency so we can consolidate the foundation for economic recovery,” Li was quoted as saying.

In the videos, Li is accompanied by Guangdong party secretary Li Xi and governor Wang Weizhong.

“I am counting on you!” Li says to the crowd.

The economy has taken a heavy hit from the Covid-19 pandemic and tough official efforts to control outbreaks. Guangdong, one of China’s most dynamic provinces and export engines, only recorded 2 per cent economic growth in the first half of the year, well below the 5.5 per cent national growth rate set in March.

Analysts said Li’s trip was an attempt to take the pulse of the economy and map out policies at the Politburo’s meeting later this month.

“Guangdong is key to China’s exports. A deep dive into Guangdong will help Beijing to formulate better policies in this month’s Politburo’s meeting to address the economic woes more effectively,” said Xie Maosong, a senior fellow of the Taihe Institute and a senior researcher at the National Institute of Strategic Studies at Tsinghua University.

“Li picked this time to visit Shenzhen … to give greater confidence to small and medium-sized enterprises, the real estate market and private enterprises, indicating the authorities will unify them so China can make a soft landing,” Dong said.

“But … the authorities have already given up the 5.5 per cent growth target, which was set in March … before the Shanghai [Covid] lockdown, and they will accept a lower but more practical growth rate [for 2022],” she said.

“Shenzhen is the hub for semiconductor production and digitalisation. The premier’s visit to Shenzhen is a natural route in conjunction with the country’s transition to hi-tech manufacturing development,” Xu said.

“China’s economy is facing challenges due to the pandemic, southern cities like Shenzhen have the obvious leading role for the country’s economic growth.”

“The first one is to boost confidence in economic development as recent finance and credit data show that consumption and investment are slackening due to a lack of confidence,” Peng said.

“The second one is to underscore the leadership’s attention and support for the Greater Bay Area ... and to emphasise that [policy] priority must be given to reform and opening up, and the economy.”

Guo Wanda, vice-president of the Shenzhen-based China Development Institute, said Li was anxious to give young people a helping hand.

“Li visited Shenzhen, which is one of China’s most energetic cities, because he wanted to show his support for … young people who are there to try new ideas, to encourage them to innovate or become entrepreneurs even though the economy is struggling and the job market is tight,” Guo said.