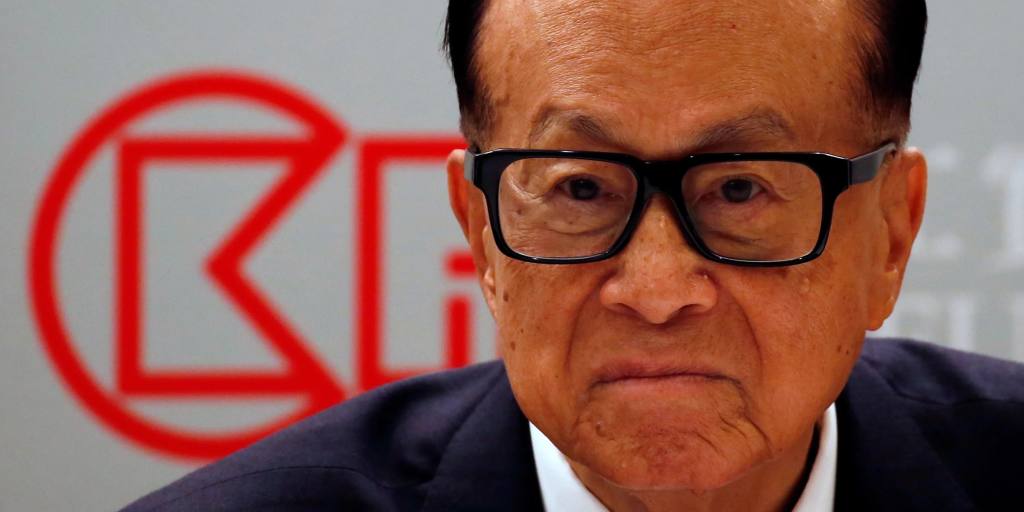 Tycoon seeks to ease social grievances with cash handouts to local businesses
When Hong Kong's richest man called on authorities to show leniency toward young protesters, the Communist Party of China accused him of "harboring criminality."

But that does not mean protesters have embraced Li Ka-shing.

"[He is one of the] beneficiaries of an unjust system," said Penny Lok, a 36-year-old protester who says the billionaire has always put business before ideals.

Antipathy from both sides has become the norm for Li, who occupies an ambiguous - and at times contradictory - position in today's Hong Kong.

From humble beginnings, Li amassed a personal fortune of $27 billion and created a sprawling business empire that touches almost all aspects of daily life in Hong Kong. And he can be generous with his wealth.

In the space of two months, he distributed 1 billion Hong Kong dollars ($128 million) to help local businesses hit by the unrest that has rocked the city. Some 28,000 retail, tourism and catering companies, as well as hawkers, received assistance of up to HK$60,000 each through Li's foundation.

That money has provided a much-needed cushion for restaurants, according to Simon Wong, chairman of the HK Japanese Food and Cuisine Association. "The whole process was very fast, and most received the money shortly after application," Wong said.

But there is an irony to Li's generosity: his vast wealth epitomizes the staggering social inequality that has helped fuel more than six months of protest.

The handouts, moreover, do not address the elephant in the room.

"What we need the most from landlords is rental reduction," Wong said.

Few developers, including Li -- who owns 15 shopping malls in Hong Kong -- have agreed to cut rents despite a sharp fall in shop revenues. Six months of protests have hit retailers hard, with nearly a third warning that layoffs are imminent.

Rent constitutes the biggest single cost for many businesses. Retailers in Hong Kong typically spend 40% of their budget on rent, and the share is about 25% for restaurateurs, according to government statistics in 2017.

"We can't survive under these circumstances," Wong said.

While Li embraces a dual role of ruthless capitalist and generous philanthropist, his vague tone on political matters is not endearing him to either side.

Unlike property developers whose businesses are primarily in Hong Kong and China, Li's conglomerate has a diverse portfolio spanning Asia, Europe, North America and Australia. This means he must walk a fine line between the authoritarian mainland China and Western democracies to protect his business interests, according to Joseph P.H. Fan of the department of finance at the Chinese University of Hong Kong.

"Li needs to give consideration to both sides," Fan said. "He can neither be perceived as a keen follower of the Communist Party, nor can he behave like a supporter of democracy."

Last year, Li's flagship company CK Hutchison Holdings generated more than 80% of its profit and revenue outside of Hong Kong and mainland China, according to the company's financial filings. Deriving the bulk of his business overseas means Li can afford to risk offending Beijing more than other companies, such as Cathay Pacific Airways, Fan said.

At the same time, however, the Li family still has a staggering amount of influence in Hong Kong. From property and retail to transport and telecommunications, almost every aspect of life in the former British colony is touched by Li's business empire.

That very success could come back to bite the family, as young people angry over the city's inequality challenge the establishment, Fan said.

"As part of the vested interests, [tycoons] should share their wealth with people with the deepest discontent before the problems explode," Fan said. "This is more like a protection fee for their own [benefit]."

Victor Zheng, assistant director of the Hong Kong Institute of Asia-Pacific Studies agrees that action is needed, but says the city's tycoons must do more than make donations.

"In my view, if they don't handle well the problems of high prices and rents and the lack of social mobility, they will get hurt eventually, like a boomerang," Zheng said.

Billionaires elsewhere are already making efforts to close the wealth gap. Earlier this year, Warren Buffett and Bill Gates - two of the richest people in the world - called for higher U.S. taxes on the wealthy. Buffett argued that in a system where industries become increasingly specialized, it is inevitable that the rich get richer.

That tendency is especially pronounced in Hong Kong. The city is regularly rated as one of the freest capitalist economies in the world thanks to its low tax rates and minimal government interference.

Fan of CUHK said that the Beijing-appointed local government has very little capacity to tackle the root causes of thorny social problems because it lacks a strong political foundation. And Beijing cannot take action because of the "one country, two systems" policy under which Hong Kong enjoys a high degree of autonomy.

The result is another irony: When anger over an unequal society erupted this summer, it was up to local tycoons - the same men who have benefited the most from the establishment - to step in and fill the void of local governance.

When Beijing called on family-owned real estate empires to address Hong Kong's housing shortage, for example, most of them promised to donate land for public housing and other charitable purposes.

In another incident showing he is in a class by himself, Li chose not to. As his foundation explained in an email to Nikkei, "Building houses on farmland is a time-consuming project and it will take [a] long time to benefit the people in need."

Instead, Li set up the Crunch Time Instant Relief Fund just days after the government announced a plan to inject HK$2 billion into two similar relief funds. While the government is still seeking approval from the Legislative Council for those funds, Li's disbursed all of its money within two months, with help from Google's AI technology.

Annie Yau Tse, chairwoman of the Hong Kong Retail Management Association, said Li's funds were a timely relief for struggling retailers and urged the government to streamline vetting procedures for its own funds. "I hope the government can see the pressing need of retailers and think out of the box," she said.

But pragmatic or not, Li's penchant for doing things his own way, coupled with his vague political stance, could end up backfiring on his family, according to Phillip Zhong, an analyst at Morningstar Investment Management.

"It's a business risk," Zhong said, noting that Li's move to sell down assets in China in recent years and his remarks on the protests have already raised eyebrows in Beijing.

The Chinese government could eventually decide that Li's companies are out of favor - and he might not the only one affected.

Richard Li, the youngest son of the tycoon, runs a separate telecommunication business. His company still generates most of its revenue in Hong Kong and mainland China. In August, the younger Li aligned himself with other tycoons and issued multiple full-page advertisements on the front pages of local newspapers condemning the violence.

"His sons could be the ones to pay the price," Zhong said.
Add Comment