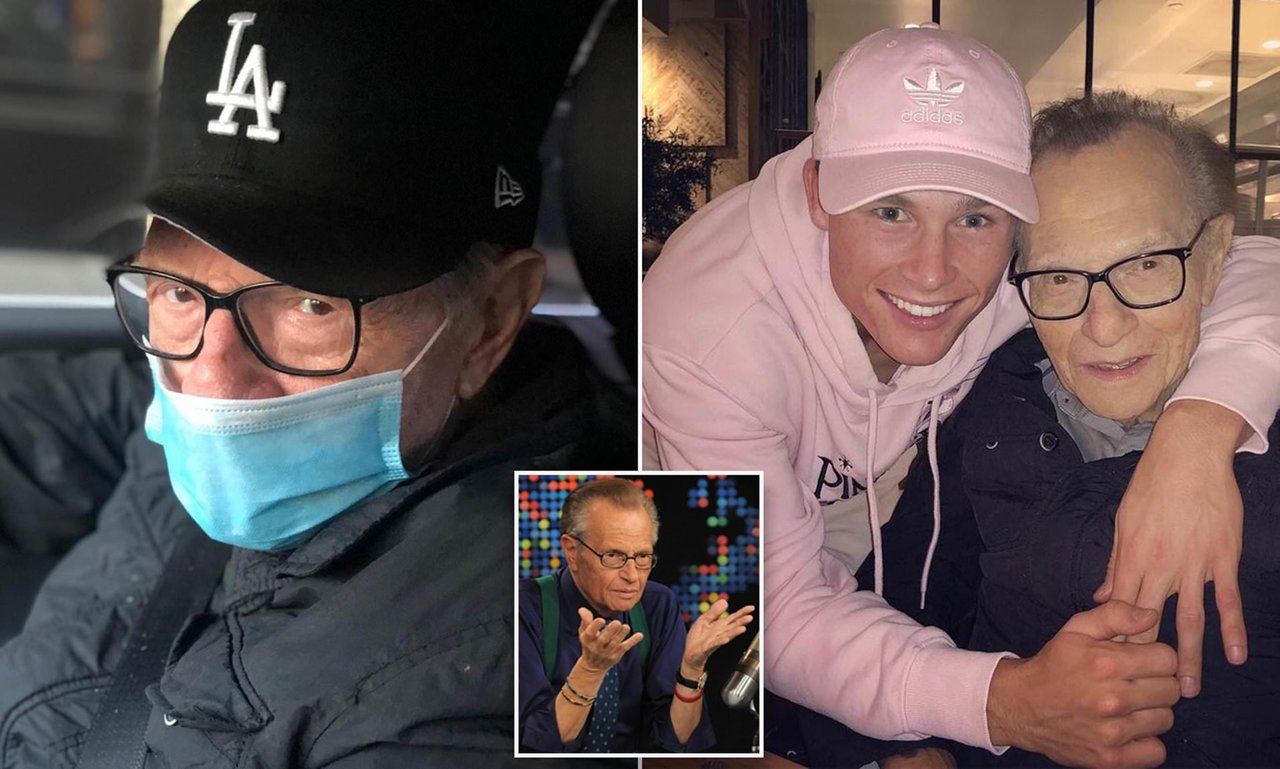 Larry King, 87, 'is in the hospital with COVID-19' as concern grows for broadcast legend who has had health issues including a heart attack, prostate and lung cancer, and diabetes
Larry King, the 87-year-old broadcasting legend best known for his long-running guest interview show on CNN, has been diagnosed with COVID-19, it has been reported.

The former Larry King Live host has been hospitalized in Los Angeles, according to Roger Friedman’s Showbiz 411.

King's advanced age and poor health are a cause for concern and place him at elevated risk.

King has had numerous health issues, including a heart attack, prostate and lung cancer, and type two diabetes.

Aside from his poor health, King must also deal with the fact that his loved ones cannot visit him in the hospital, according to Friedman.

His wife of 23 years, Shawn King, 61, and their two sons, Chance and Cannon, cannot see him.

But doctors and nurses at the hospital are facilitating communication between King and his loved ones.

King and his wife are still legally married and said to be on good terms despite the fact that they were in the process of divorcing.

In August 2019, Larry filed for divorce from Shawn just five months after suffering a stroke.

Last month it was learned that King agreed to pay his estranged wife Shawn $20,000 in a lump sum, plus $33,000 a month in spousal support.

The monthly payment - revealed in new court documents obtained by DailyMail.com - will last at least until the couple's next Los Angeles Superior Court hearing, scheduled for April 29 next year.

While $33,000 per month may seem like a large sum, it only covers about a third of Shawn's monthly expenses, which she has listed in court papers as just under $90,000.

But then, Shawn does confess that she has more than $7 million in assets, including property and savings.

This has been a tragic year for the veteran television personality.

In August, his granddaughter told DailyMail.com that two of his five children passed away within the span of a month.

King’s son Andy, 65, died suddenly on July 28 from what his family believed to be a heart attack.

He was followed by his sister, King’s daughter Chaia, 52, who died on August 19 following a battle with lung cancer.

King's granddaughter Jillian, 31, said at the time that the 87-year-old TV show host was still recovering from his stroke and unable to travel from Los Angeles due to coronavirus, and so he had to watch his Florida-based son be buried on video.

‘He was very sick last year. His kids were all taking very close care of him. He’s upset that he’s lost them now.’

King has three other children; Larry Jr, 58, from his brief marriage to Annette Kaye, and sons Chance, 21, and Cannon, 20, from his marriage to Shawn.

Bereaved Jillian described her shock when she heard the news of her father Andy's sudden passing – even while she was dealing with yet another death, of her father-in-law in Kentucky earlier in July.

In November 2019, Larry King told news site Extra he was recovering and spending two weeks in a coma after suffering a stroke the previous March.

'I had a stroke. Everything got better except [for] my left foot, and I have been rehabbing that every day, and they tell me I'll be walking by Christmas,’ he said.

'I've been walking with a walker. It's been a rough year, I don't remember anything since March.

‘I haven't driven a car, but I'm back at work and that makes me feel great.’

In the interview Larry reassured fans that his doctors were impressed with his positive attitude: 'My head doctor said I have an incomparable spirit.'

The Larry King Show star has had a complex and storied love life, with eight marriages to seven women and has fathered five children.

He married Alene Akins twice, adopting her late son Andy during their first marriage and fathering his late daughter Chaia in their second.

After divorcing Alene in 1972, he went on to marry Freda Miller, Annette Kaye, Mickey Sutphin, Sharon Lepore, Julie Alexander and most recently Shawn Southwick in 1997.

Shawn, who mothered Larry’s two youngest sons, Chance, 21, and Cannon, 20, has previously joked she is ‘the only [wife] to have lasted into the two digits’.

In 2009 Larry revealed he had another son named after him, who he had not acknowledged for 33 years.

Larry King Jr, born from his brief marriage with Annette Kaye, appeared for the first time in public with his father on ‘Larry King Live’ 11 years ago.

Larry Jr. is reportedly married with three children of his own and has worked as the head of King’s heart disease foundation in California.
#COVID-19  #Covid  #Coronavirus

Oh ya 209 days ago
Only 12.000 a month for clothes. My god how does she budget so well. And 4500 for hair and nails? What a thrifty wife he had. As you can see these people have no grasp on reality yet they feel it is their right to preach to you.
View all comments (1)Add comment