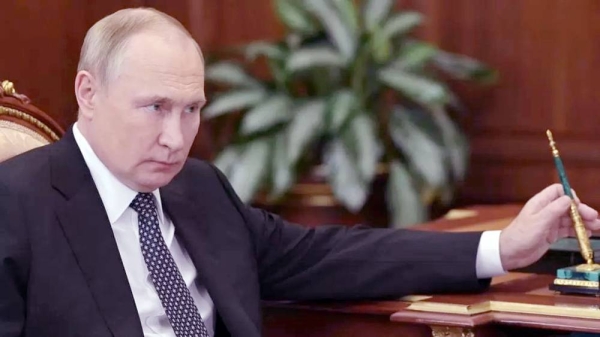 Russian President Vladimir Putin has ordered his defense minister to impose a 36-hour ceasefire on the Ukrainian front line.
The ceasefire— from 12:00 Moscow time (09:00 GMT) — coincides with the Russian Orthodox Christmas. Putin asked Ukraine to reciprocate, but Kyiv quickly rejected the request.

Ukraine's President Volodymyr Zelensky said the truce was an attempt to stop his country's military advances in the east of the country.

The Kremlin statement appeared to stress that President Putin ordered his troops to stop fighting not because he was de-escalating — Putin never de-escalates — but because he had listened to an appeal from the head of the Russian Orthodox Church.

Patriarch Kirill had, earlier in the day, called for a Christmas truce to allow believers to attend services for Orthodox Christmas.

Putin's order called on Ukraine to reciprocate so that the "large numbers of Orthodox believers [who] reside in areas where hostilities are taking place" could celebrate Christmas Eve on Friday and Christmas Day on Saturday.

But in his nightly video address, President Zelensky said that Russia wanted to use the truce as a cover to stop Ukrainian advances in the eastern Donbas region and bring in more men and equipment.

Some people in Ukraine celebrate Christmas on Dec. 25, others on Jan. 7. Both days are public holidays in the country.

This year, for the first time, the Orthodox Church of Ukraine said it would allow its congregations to celebrate Christmas on Dec. 25, as do some other denominations in western Ukraine.

The Church split with the similarly named Ukrainian Orthodox Church (UOC) in 2018.

The UOC itself was tied to Moscow's religious leadership until Russia's invasion, and some of its top clergy have been accused of still covertly supporting Moscow.

He pointed to Russia's shelling of Kherson on Dec. 24 and strikes on New Year's Eve as evidence of Moscow's inability to cease hostilities during religious holidays.

US President Joe Biden believes Putin was simply "trying to find some oxygen".

The Kremlin's ceasefire fits in nicely with a common narrative in Moscow, one that is aimed primarily at the domestic audience.

That is — that the Russians are the good guys, and it is Ukraine and the West that are threatening Russia.

The truce is also a handy tool that can be used to demonize Ukraine — as the Ukrainians have dismissed the proposal, Moscow will claim that Kyiv does not respect religious believers and has no desire for peace.

But it should not be forgotten that it was Russia who started this war by launching an unprovoked invasion of its neighbor.

The move also comes just a few days after a large number of Russian troops were killed in a Ukrainian strike on a temporary barracks in the occupied Ukrainian city of Makiivka.

The Russian Defense Ministry put the death toll at 89, making it the highest single loss of life admitted by Moscow since the war began.

Relatives of the dead, as well as some politicians and commentators, expressed anger over what happened in Makiivka and blamed incompetent military officials.

The incident happened on New Year's Eve — the most important holiday in the Russian calendar.

Political analyst Tatyana Stanovaya said that it is possible the Kremlin wants to ensure no more major loss of life occurs on another important Russian holiday.

"Putin really does not want a repetition of that on Orthodox Christmas Day," she wrote.

A few hours after Russia's ceasefire announcement, Germany said it would follow the US in providing a Patriot air defense missile system to Ukraine.

Germany also announced, in a joint statement with the US, that both countries would send armored vehicles.

France said on Wednesday that it would send armored fighting vehicles. Kyiv has repeatedly called for more aid from its international allies in the face of continuing Russian aggression.
#Joe Biden
Add Comment