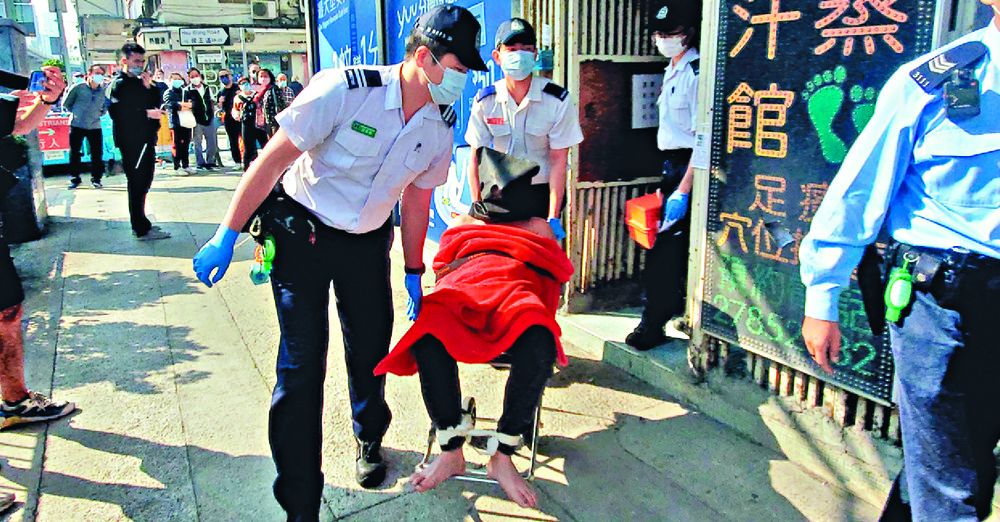 He allegedly robbed a woman, Mok Tai-tin, of an iPhone 11 and broke her spectacles at the junction of Nam Kok and Carpenter roads on Sunday.

He is also alleged to have assaulted a male passerby Ho Chi-wing and maliciously wounded Mok. Feng was also accused of stealing a 39-centimeter butcher knife from a meat store owner, Lam Pui-tak, on Nga Tsin Lon Road.

Additionally, he is accused of damaging the front windshield of a car belonging to Lee Lok-hin at the junction of Hau Wong and Nga Tsin Wai roads and of assaulting him.

Four of the charges alleged that he set several fires in a building on Prince Edward Road West, including an umbrella, a pair of shoes owned by a tenant Thatsanee Khong On and a set of bedsheets owned by Au Chun-pong in Nga Li Guesthouse.

Feng was also accused of maliciously wounding guesthouse worker Au and damaging a rubbish bin belonging to him.

Feng did not plead yesterday. The prosecution submitted a doctor's letter saying that Feng is suspected of suffering from mental illness.

Chu agreed to the prosecution's request to adjourn the case to January 19 pending a psychiatric report to determine if Feng is suitable for making a plea.

Feng did not apply for bail and will remain in custody.
Add Comment