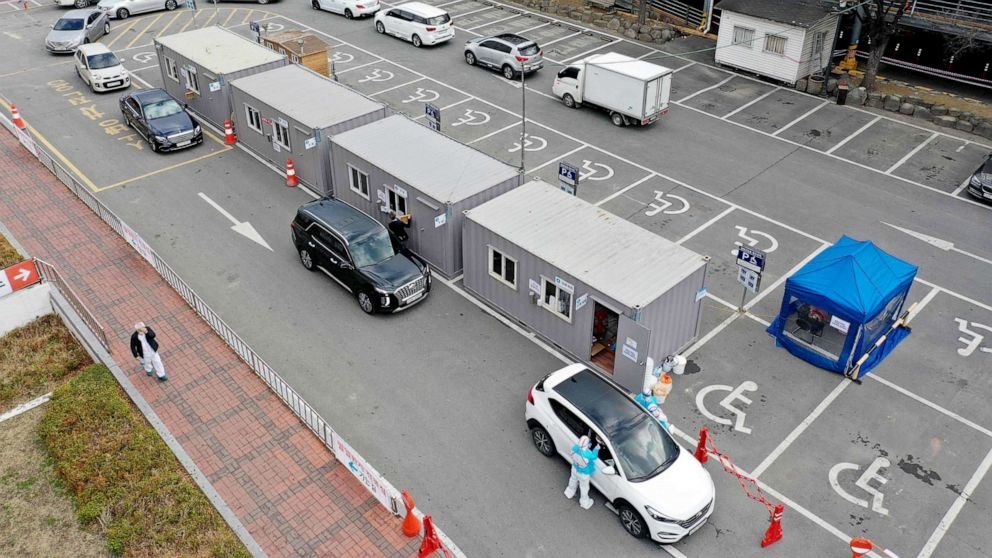 Korea is not more coronaviruse infected, but has the much more advanced coronavirus checking method

A big reason for South Korea's success is how quickly they were able to get test kits ready. Experts noted that South Korea has one of the world’s fastest methods to discover the virus among suspected cases and carries out about 5,000 tests every day, a far cry from other advanced countries such as Japan or less advanced but more rich countries as the US.
“The more tests you carry out, the more patients there will be. South Korea has made itself the world’s second largest country in terms of the number of Covid-19 patients, due to its own technology and efforts,” said a medical doctor who works for the health ministry and asked to remain anonymous.

South Korea had tested a total of 66,652 people for the COVID-19 coronavirus virus as of 4 p.m. local time Thursday, whereas Japan had reported administering roughly 1,890 tests and the U.S. only 445. The huge discrepancy compared to other countries reflects how quickly South Korea’s numbers have been rising, experts say.

More than 10,000 people a day are being tested around the clock, propelled by a sense of concern that the virus may spread outside of Daegu area, where around 80 percent of all confirmed cases have been found.

"This week is crucial for us in determining whether we have successfully dealt with COVID-19," South Korea Prime Minister Chung Sye-Kyun said.

The tests are being run at 79 designated health centers, in addition to authorized private hospitals and public health labs across the country.

"We have quickly selected these institutions after training and evaluation programs held on Feb. 7 and 20," official Park Hyun Kyu at Korea's Center for Disease Control told ABC News. "They do preliminary screening, then send all positively sampled results to us for final diagnosis."

"I think it’s excellent," said Ellerin, who confirmed the validity of the South Korean tests. "It’s an urgent situation right now, and that’s how we should be adjusting."

Doctors from around the world agree.

"Impressive testing going on here. All hail these labs!" Ian M. Mackay, a virologist at Australia's University of Queensland, tweeted.

"One thing China did was that [after] the first case came in November, activity began in late December and by January 10th China shared the sequence with the public and they already had test kits on that day."

Officials say the rapid implementation was possible because the South Korean government was able to shorten the process for the newly developed test kits to be approved by its version of the Food and Drug Administration.

"It would normally take about a year to get a test kit approved, but FDA gave out emergency approval to acceptable applicants on a temporary basis," Park said.

For the testing itself, medical institutions, spread out across local communities, follow detailed instructions provided by the central health authorities and screen applicants with suspicious respiratory symptoms. The meticulous process takes from half an hour to an hour per person.

"It just takes a lot of time because the tester has to change suits to a new one every time," said Park.

"All medical teams dispose of their quarantine suits and inspection tools by using it just once, and new medical tools are used for each patient, every time," an official with Samsung Medical Center, one of the largest testing centers in Seoul, told ABC News.

As number of tests continues to stack up, several locations have set up "drive-thru" centers that could minimize contact between the potential patient and medical staff. This new idea shortens time spent on testing to just 10 minutes per person since the medics do not have to change quarantine suits for every patient.

Applicants must drive to the site in their privately owned vehicles wearing masks. Tests are conducted at a makeshift tent outside of buildings to prevent spreading indoors.

"When I got there, someone opened the car door for me," Koo Ji-young told ABC News after receiving his test results for a $140 fee. "First, they take a chest X-ray, then measure body temperature using a noncontact measuring device. A doctor stuck a long stick into my nose and made me spit phlegm."

The government has called for more volunteer nurses and doctors to help meet the rising demand for tests.

"As of [Wednesday] morning, 205 people have registered to volunteer. We still need more," Health Vice Minister Kim Gang-lip said during a media briefing.

In Daegu, where 80 percent of all confirmed cases have been reported, 28,000 residents who have reported symptoms of flu or cold will be tested by the end of the month, officials said. Authorities have also pledged to test more than 200,000 followers of a secretive sect at the center of the recent outbreak.

"This is a contagious respiratory virus," said Ellerin. "For instance, during flu season, roughly ten percent get affected. With South Korea's 55 million population, you could easily imagine 5 million getting this."

"Sometimes we tend to overestimate," he said. "So let's see where this leads to."