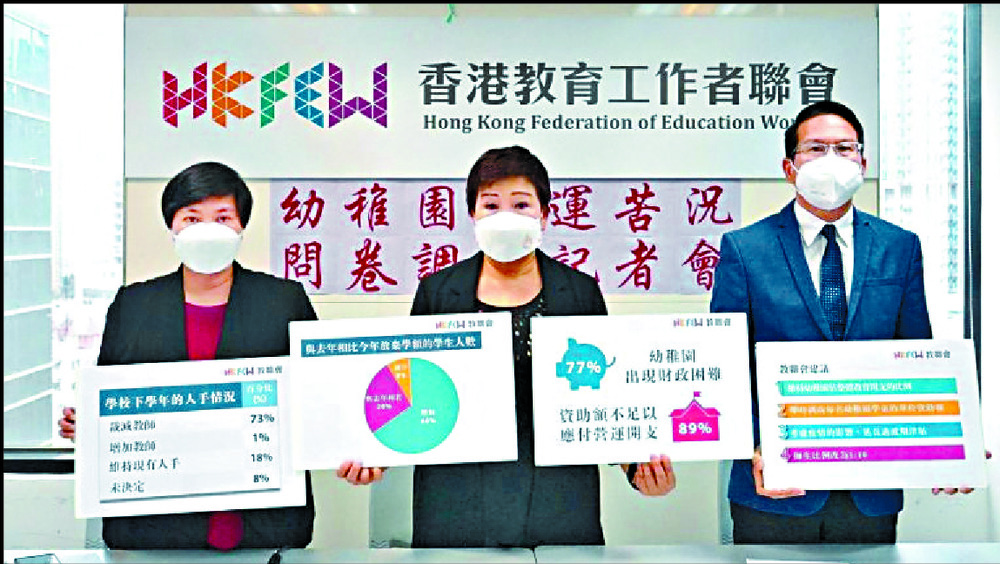 Over 70 percent of kindergartens will have to sack two or three teachers in the upcoming school year while 4 percent might shut down due to a lack of students, a survey conducted by the Hong Kong Federation of Education Workers found.
The 235 kindergartens that took part in the survey suffered an average loss of 16 full-day students, nine half-day students and 19 nursery pupils since the outbreak of the SAR's fifth wave.

The federation's vice chairwoman, Nancy Lam Chui-ling, said many kindergartens face a significant drop in enrollment next year due to myriad factors, including the Covid-19 pandemic, a low birth rate and increased emigration.

She cited one kindergarten that reported it had around 80 K3 half-day students graduate this year but only 20 K1 pupils had enrolled for next year.

Many kindergartens are also dealing with financial difficulties, Lam said, adding over 30 percent would implement a pay freeze next year.

The survey also found that around 20 kindergartens are likely to close in September.

Further, based on the existing requirement of a 1:11 teacher-to-pupil ratio, over 70 percent of kindergartens will have to lay off two or three teachers.

Some of the schools surveyed urged authorities to lower the ratio, adding the pupil unit subsidy - allotted to schools based on the size of their student bodies - is insufficient and cannot cover the costs of teacher salaries and basic operational expenses.

More than 80 percent hoped authorities could increase the unit subsidy to see them through the pandemic.

Some 10 percent said they couldn't afford operational costs for the next school year while a quarter could only afford it for another couple of months.

In another piece of bad news, the tide-over grant under the kindergarten education scheme will end next month.

Over 75 percent expressed hopes that the grant would be extended for another three years.