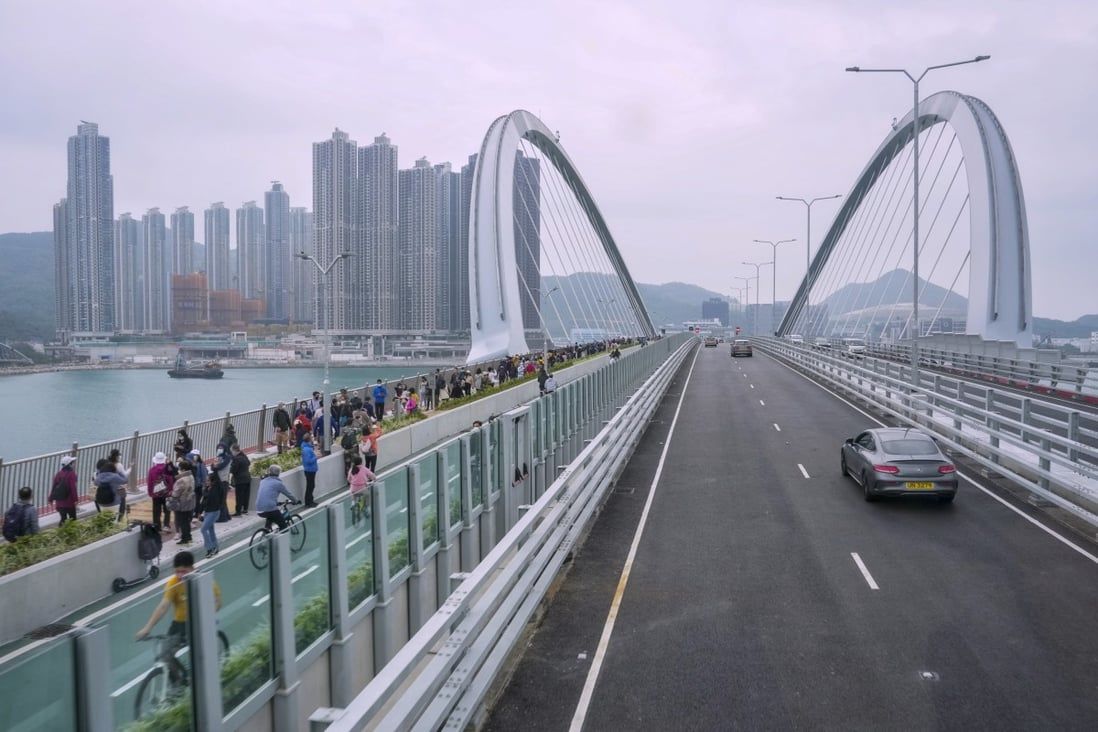 Hong Kong transport officials and police plan to keep a close watch on traffic volume on the just-opened tunnel and road links in the New Territories on Monday as observers warned of a possible bottleneck.

The Tseung Kwan O-Lam Tin Tunnel and the Cross Bay Link opened on Sunday, but traffic on the new landmark routes was hit with a hiccup after a minor accident near the Lam Tin entrance to the tunnel at around 3.35pm backed up vehicles.

Transport authorities at one stage had to appeal to drivers to avoid using the new tunnel to travel to Tseung Kwan O.

The routes, featuring a toll-free tunnel and a connecting double-arched bridge, fast became a popular Instragrammable destination. Locals and visitors jostled for position to pose for selfies in front of the new landmarks. 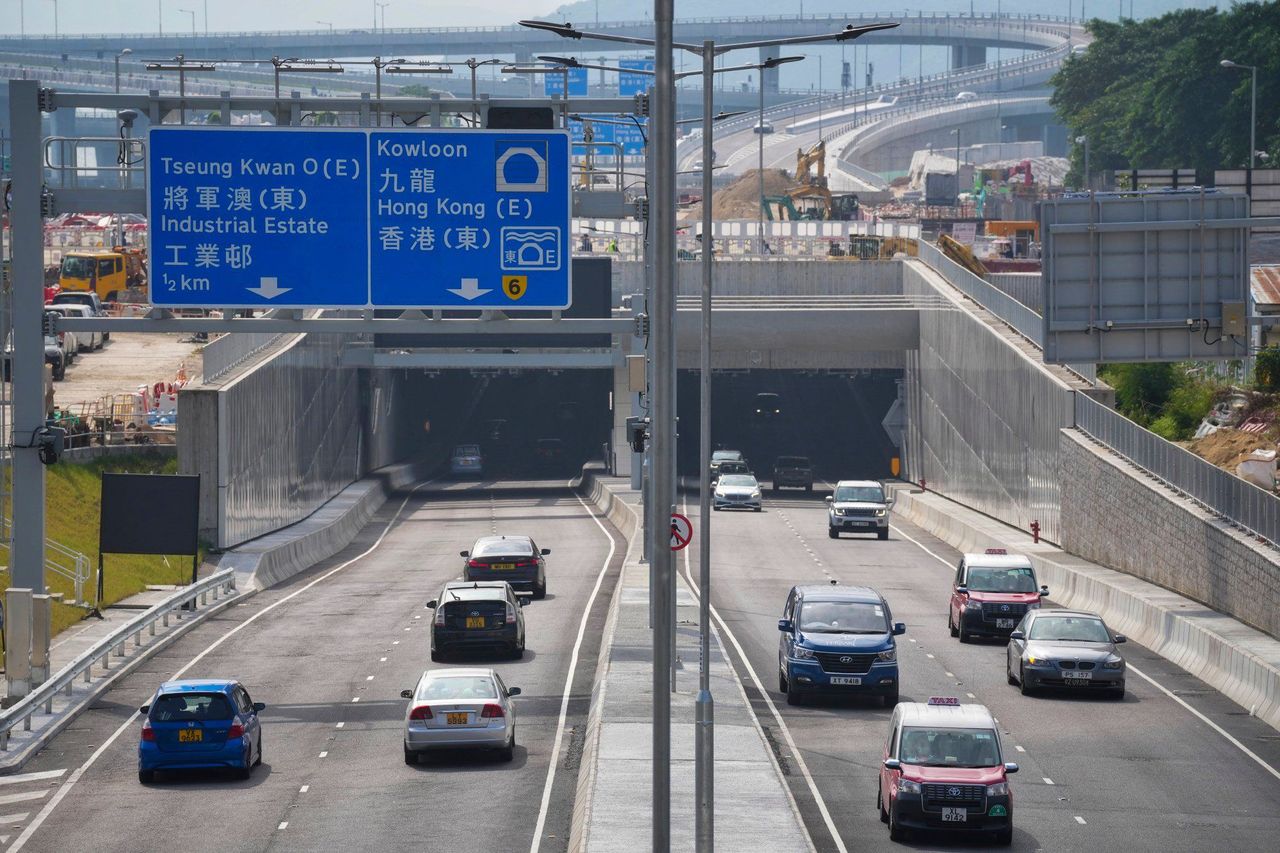 The Tseung Kwan O-Lam Tin Tunnel and its associated bridge welcome their first vehicles on Sunday.
Chief Executive John Lee Ka-chiu on Sunday said transport officials would be on the alert throughout the day to monitor the traffic on the new network, as well as the old road system, and bus companies had also been told to be prepared to increase services or tackle problems if needed.

“Bigger challenges may be expected on Monday as it will be the first time our new tunnel and link are used on the day when people need to go to work or go to school,” Lee said. “It will also be the first day when a large volume of traffic is expected to use the Tseung Kwan O Tunnel for free.”

Lee added he was pleased the new roads had attracted a strong response from users on their first day of opening and he highlighted that traffic flow had been mostly smooth.

But Kwun Tong district councillor Wilson Or Chong-shing said the roundabout on Cha Kwo Ling Road, the only exit on the Lam Tin side because the construction of the Trunk Road T2 connecting the Central Kowloon Route and the tunnel had yet to be completed, had become a bottleneck.

“It is disappointing that the government has not widened the road or introduced extra measures to cater to the increased number of vehicles on the road following the tunnel’s opening,” he said.

Or said the long queues had spread to the already congested industrial area in Kwun Tong after Sunday’s accident.

“The situation may only become worse on Monday,” he warned.

Lawmaker Stanley Li Sai-wing visited the roundabout on Cha Kwo Ling Road in the morning and agreed the area could be a big problem.

“The government did not consider the problems of illegal parking and traffic flow when it designed the roundabout,” he said. “I don’t see a short-term solution until road improvement work is carried out there. A traffic jam must happen there during peak hours.”

The Tseung Kwan O-Lam Tin Tunnel is a dual carriageway with two lanes each side and about 3.8km (2.4 miles) long, designed to link Tseung Kwan O and East Kowloon.

The Cross Bridge Link, a 1.8km dual carriageway across Junk Bay, connects with the tunnel.

It is also Hong Kong’s first marine bridge to have roadways, a bicycle lane and a footpath.

The green strips along the link are also used to divide the three ways of crossing the bridge.

The government said it hoped the new transport arteries would improve traffic conditions in the Kwun Tong district and handle the expected extra traffic load from future development in the area.

Many Tseung Kwan O residents welcomed the opening, with some seen taking a walk or biking on the cycle lane.

Lohas Park resident Maybelle Cheung Mei-yin, 32, a beauty consultant, with her husband and their four-year-old son were among the people walking and cycling over the Cross Bay Link.

But she said she would stick with the railway to get to Tsim Sha Tsui for work for a few weeks because “traffic congestion always happens with new infrastructures”.

Dennis Ma Yiu-keung, 26, a logistics worker, rode his bike from Tiu Keng Leng to Lohas Park and said the bridge was a nice addition to the area.

“Tseung Kwan O is big, but it has not always been cyclist-friendly. Now I can ride my bike everywhere, including going to work as I work at the Tseung Kwan O industrial estate,” Ma said.

Louis Kung Syu-yan, head of service delivery at Citybus and New World First Bus, said the new 790 bus would only take 25 minutes to go from Lohas Park and Tsim Sha Tsui, down from the 40 minutes needed for the trip by railway.

Kung said backup buses were ready in case of an unexpected surge in passengers on the first day.

Financial Secretary Paul Chan said on his official blog on Sunday that “forward-looking planning” for major projects was needed to boost economic growth.

He added that Hong Kong had built more than 360km of new roads since the 1997 handover, extending the road network in the city to more than 2,100km.

He also singled out the construction of the new airport in the 1990s and the recent creation of its new third runway, the West Rail line, the cross-border express rail and the Hong Kong-Zhuhai-Macau Bridge.

Chan said many of the major construction projects over the past few decades had caused controversy and sparked resistance when they were first proposed.

“But looking back, they all have had epoch-making strategic significance,” Chan wrote.
Add Comment