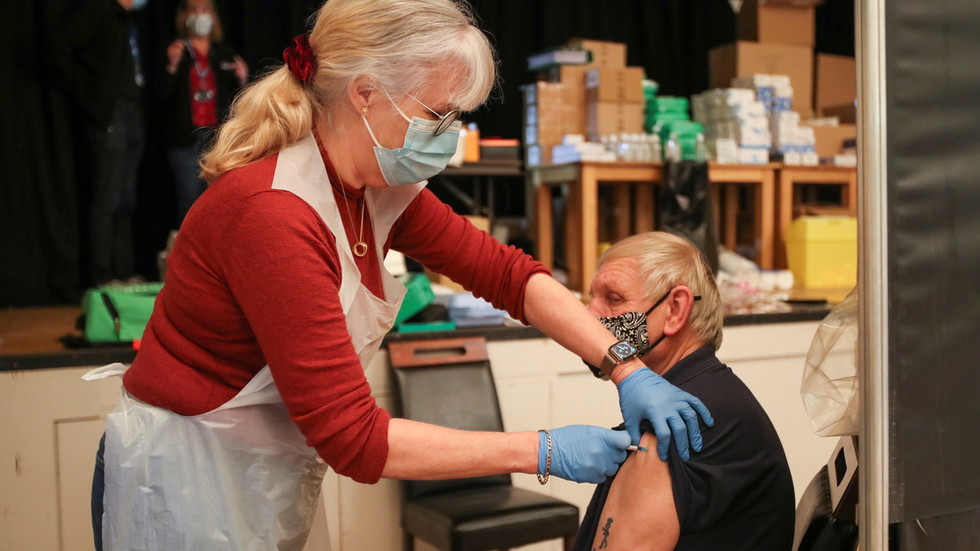 A single dose of the Pzifer or AstraZeneca vaccine against Covid-19 cuts the hospitalisation rate of those aged 80 years and older by 80 percent, Public Health England (PHE) officials said on Monday, citing a pre-print study.
The real-world study, based on data collected from the vaccination program in England, supports similar findings detailed last week by officials in Scotland.

So far, more than 20 million people across the UK have received at least one dose from among the three vaccines approved to date in the country.

PHE reported that, for those aged 70 or over, after four weeks, Pfizer-BioNTech’s vaccine was 57 to 61 percent effective, and Oxford-AstraZeneca was between 60 and 73 percent effective. The Moderna vaccine has also been approved for use by UK health regulators, but the PHE study did not detail it in the pre-print.

Amid concerns that the more transmissible Covid strain first detected in Britain in late 2020 could hamper the vaccine roll-out, the study also noted that “there is a clear effect of the vaccines against the UK variant of concern.”

Speaking at a daily update on Covid-19 at Downing Street, UK Health Secretary Matt Hancock said the new study’s results may also help to explain why the number of virus-related admissions to intensive care units among people over 80 in the UK have dropped to single figures in the past couple of weeks, which, he said, “is something I know we all welcome”.

Hancock said people studying the new data would be assured that both vaccines are “extremely effective” after one dose, adding that getting a jab “is the right thing to do”.

Professor Jonathan Van-Tam, England’s deputy chief medical officer, says public health agencies were now confident in reporting that both the Oxford-AstraZeneca and Pfizer vaccines are 60 percent effective against illness after the first dose.

“It shows us how, if we are patient ... the vaccine programme is going to take us into a very different world in the next few months,” Van-Tam said, adding that it’s important to come forward for both the first and second dose of the vaccine when called.
#COVID-19  #vaccine  #Pfizer  #BioNTech  #AstraZeneca  #Covid  #Vaccines

Oh ya 147 days ago
Big pharma and government will now say anything just to get the DNA altering mRNA vaccine into as many people as possible. People please do some research yourself. A mRNA vaccine has never been used on humans before. It makes a spike protein in your body and they have no idea what else it might attack in your body later on down the road. But hey your choice I do not really care if it kills you
View all comments (1)Add comment