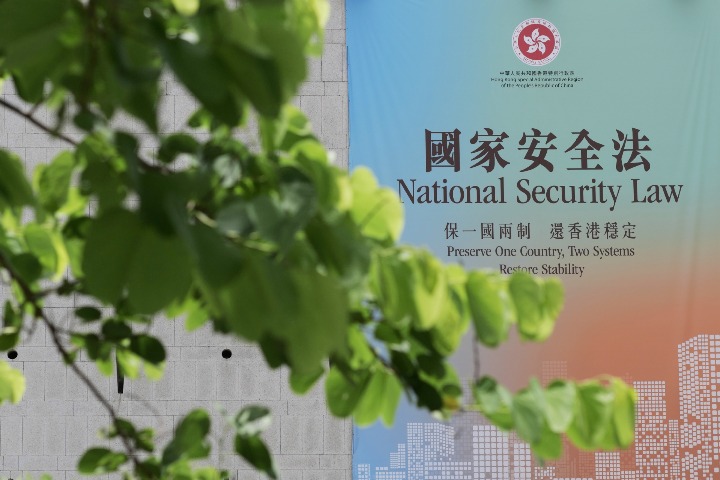 By Junius Ho Kwan-yiu and Kacee Ting Wong
"Whether judges of the (United Kingdom) Supreme Court can continue to serve as judges in Hong Kong will depend on whether such service remains compatible with judicial independence and the rule of law."
The Law of the People's Republic of China on Safeguarding National Security in the Hong Kong Special Administrative Region, enacted on June 30 by the Standing Committee of the National People's Congress, was made under the auspices and mandate of the National People's Congress, China's top legislature.

Reed, as widely reported in the media, said: "The new security law contains a number of provisions which give rise to concerns. Its effect will depend upon how it is applied in practice.

"Whether judges of the (United Kingdom) Supreme Court can continue to serve as judges in Hong Kong will depend on whether such service remains compatible with judicial independence and the rule of law."

In addition, Reed said: "(The UK Supreme Court) will continue to assess the position in Hong Kong as it develops, in discussion with the UK government. The (UK) Supreme Court supports the judges of Hong Kong in their commitment to safeguard judicial independence and the rule of law.

"Undoubtedly, the judges of the (Hong Kong) Court of Final Appeal will do their utmost to uphold the guarantee in Article 85 of the Hong Kong Basic Law that 'the Courts of the Hong Kong Special Administrative Region shall exercise judicial power independently, free from any interference'."

The remarks by Reed, who also is a nonpermanent Court of Final Appeal judge, raise multiple concerns.

The first is whether a judge's extrajudicial comments may backfire on him or her at a later stage. There have been occasions where a judge's prior extrajudicial remarks were cited as grounds for appeal.

The case of Timmins vs Gormley (2000) is an example of this.

It concerned a negligence action arising from a traffic accident. The appellant (the insurer) brought the trial judge to the Court of Appeal of England, alleging apparent judicial bias on the basis that the judge was "influenced by an unconscious but settled prejudice against the insurers". In support, the appellant presented a number of academic articles published in legal reviews by the judge evidencing his proclaimant, anti-insurer attitude. A retrial was eventually ordered.

The second concern is that the National Security Law for Hong Kong was duly made in accordance with the Chinese Constitution and the Hong Kong SAR's Basic Law. Therefore, it would be extraordinary for Reed, in his capacity as a nonpermanent Court of Final Appeal judge, to have made such remarks to challenge the new law outside a court of law.

The third concern is that Reed's comments appeared neither helpful nor constructive in assuring global confidence in Hong Kong's legal system. The statements may well render him in direct conflict with the obligations imposed in the Guide to Judicial Conduct, which says in part that judges should "ensure that (other professional activities) do not affect the discharge of their judicial duties. A judge should avoid expressing views on controversial legal issues which are likely to come before the courts in a way which may impair the judge's ability to sit."

Reed erred by showing his nonacademic views on the National Security Law for Hong Kong out of the context of an actual legal case. He may have fallen on the wrong side by jumping the gun before wearing the wig.

Junius Ho Kwan-yiu is a Legislative Council member and a solicitor. Kacee Ting Wong is a barrister and a member of the Chinese Association of Hong Kong and Macao Studies.
Add Comment