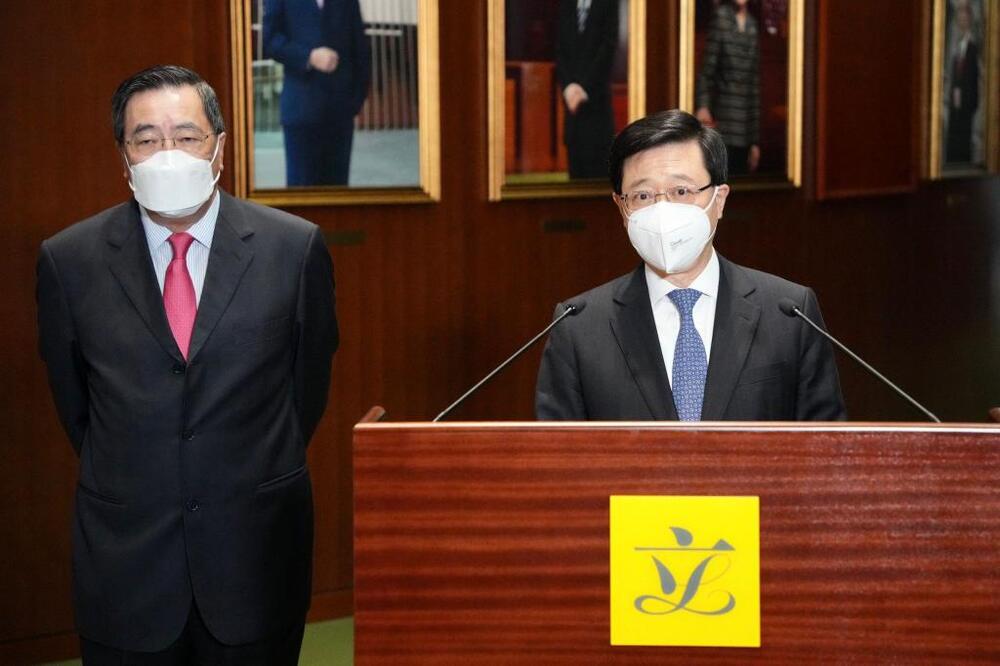 Chief Executive John Lee Ka-chiu said the outcome of the first "antechamber chats" with lawmakers was satisfying, as he stressed the government will take forward anti-Covid works according to actual situations.
Lee and his top ministers met lawmakers for the first time in a newly introduced "antechamber chats" on Wednesday for informal exchanges.

He and Legco president Andrew Leung Kwan-yuen met with the media after the chat ended at 11am.

Lee thanked Leung for accepting the proposal of "antechamber chats" and said that under the executive-led and patriot-led governance, he hoped the relationship between the executive and the legislature could be brought to a new level.

He also said he hoped that through establishing a standing communication mechanism, positive interaction between the government and the Legco could be started, describing today as a new starting point and the first step in the exchange between the two sides.

He added that the atmosphere of the exchange session was good, with lawmakers expressing their views frankly and actively. He was satisfied with the outcome and thanked all lawmakers for their opinions.

He said he would increase communication with Legco in the hope that it would serve as an example.

Separately, Lee said the anti-epidemic measures should be adapted to the times and to facilitate foreigners entering Hong Kong.

He also said the recent increase in the number of confirmed cases was expected to see a quarter of medical services specifically targeting the coronavirus by the end of July.

The government will take forward the anti-epidemic works according to the actual situation, hoping to achieve precise adjustment of disease prevention rules.

He stressed that the authorities would try to minimize the inconvenience, and it would be helpful for the public to cooperate with the police to minimize the number of people affected.

He called on the public to get vaccinated and said the risk to children and the elderly still existed and that there would be room for relaxation of rules concerned if the risks were well managed.

He added that a balance should be struck between transparency and necessity when announcing policies and that details would be announced according to the actual situation, agreeing that the explanation should be as early, clear, and concise as possible.

Leung said it only took a week to make the "antechamber chats" come true since Lee's proposal, which is considered efficient.

He said it would become the new norm of executive legislation and hoped that under the leadership of Lee, they could make good progress in their relationship.
#Coronavirus  #Covid
Add Comment