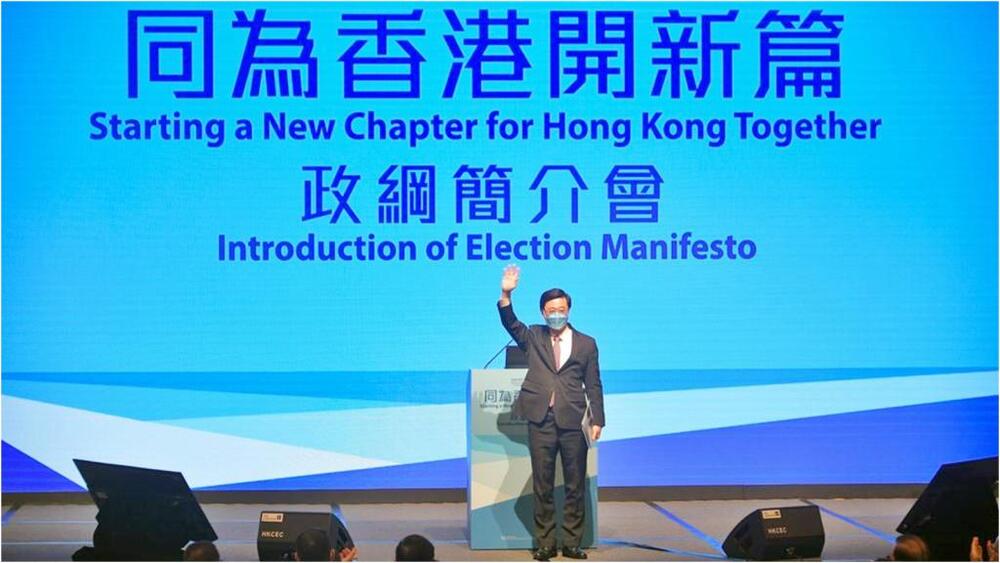 Presumptive chief executive John Lee Ka-chiu pledged in his manifesto on Friday to improve governance capabilities, increase and speed up housing and land supply in quantity and quality, to boost Hong Kong’s competitiveness and stress sustainable development, and establish a caring society and value youth development.

Lee, announcing his platform at 11am today at the Hong Kong Convention and Exhibition Centre in Wan Chai, stressed he cannot cover all aspects in his limited manifesto, but areas not included don’t mean he doesn’t care.

On strengthening governance, Lee said he intended to push forward a government restructuring plan and enhance the relationship between the legislature and the executive.

Lee also pledges to strengthen policy research ability of his administration and will task principal officials to intervene in problems early to quickly resolve problems.

A new “Mobilisation Protocol” will also be established to ensure each government department contributes certain manpower in case of emergencies.

On the fast-track housing and planning cycle, Lee said his administration would explore the feasibility of a “Public Rental Housing Advance Allocation Scheme”, a short-term relief measure to shorten the wait time of applicants.

Through this scheme, buildings within the housing projects can be allocated in advance…applicants on the waiting list who are willing to move into these units earlier before all supporting facilities are completed may elect to do so,” said Lee.

He added that the plan would be reviewed by senior government officials with an initial report to be completed 100 days after he took the helm of the SAR.

Lee noted he would also conduct a comprehensive review of the Northern Metropolis Development Strategy and the Lantau Tomorrow Vision plan, as well as the “Green Belt” zone and “brownfields” to actively explore its future developments.

“The resumption of private land by means of the Land Resumption Ordinance will also be considered,” he said.

In collaboration with non-governmental organizations and private corporations, the program will provide training and mentorship schemes, with an aim of boosting the youths’ confidence and helping them to achieve their career goals.

Meanwhile, Lee said he would improve the city’s healthcare system by supporting the Hospital Authority in recruiting a larger healthcare workforce, and promoting more applications of technology and telehealth in service provision.

On providing care for the elderly and underprivileged, Lee said his administration would reform the old age living allowance and lower the threshold for the scheme. He also pledges amendments to the Community Care Service Voucher.

He points to changes for contract-based workers, aimed at improving their living standards.

The city’s former No 2 official also said he would stepped-up training for teachers and cultivate students' national identity.

He aims to raise professionalism among teachers and provide them with training, while students will be cultivated a sense of national identity, providing them with more vocational training to create a “love China, love Hong Kong generation”.

He also pledged to fight for more opportunities for Hong Kong youngsters to undergo internships on the mainland.

At the same time, Lee said he would focus on popularising STEAM education, or science, technology, engineering, arts and mathematics.

There will be a focus on nursing and elderly care education to create “a caring society where the youth can have a dream”.

Separately, the former security minister says it is important to establish a solid foundation and do different kinds of risk assessments, to make sure the government has prepared for different emergency situations.

He noted he would fulfil the constitutional responsibility of legislation under Article 23 of the Basic Law, and promote relevant work in due course.

Ending his announcement, he said he is standing for the chief executive election due to his deep-rooted faith in Hong Kong.

“I firmly believe that after the past three difficult years…Hong Kong will once again be a peaceful, stable, pluralistic and inclusive city filled with hope,

“I pledge that I will work hard to build a government led by a responsible team and able to solve Hong Kong’s problems - a team that adopts a result-oriented approach, implements pragmatic policies, put our people first and benefits all levels of society,” said Lee.

A full version of Lee’s manifesto has been uploaded to his campaign website. The English version has 44 pages. The manifesto can be found here.