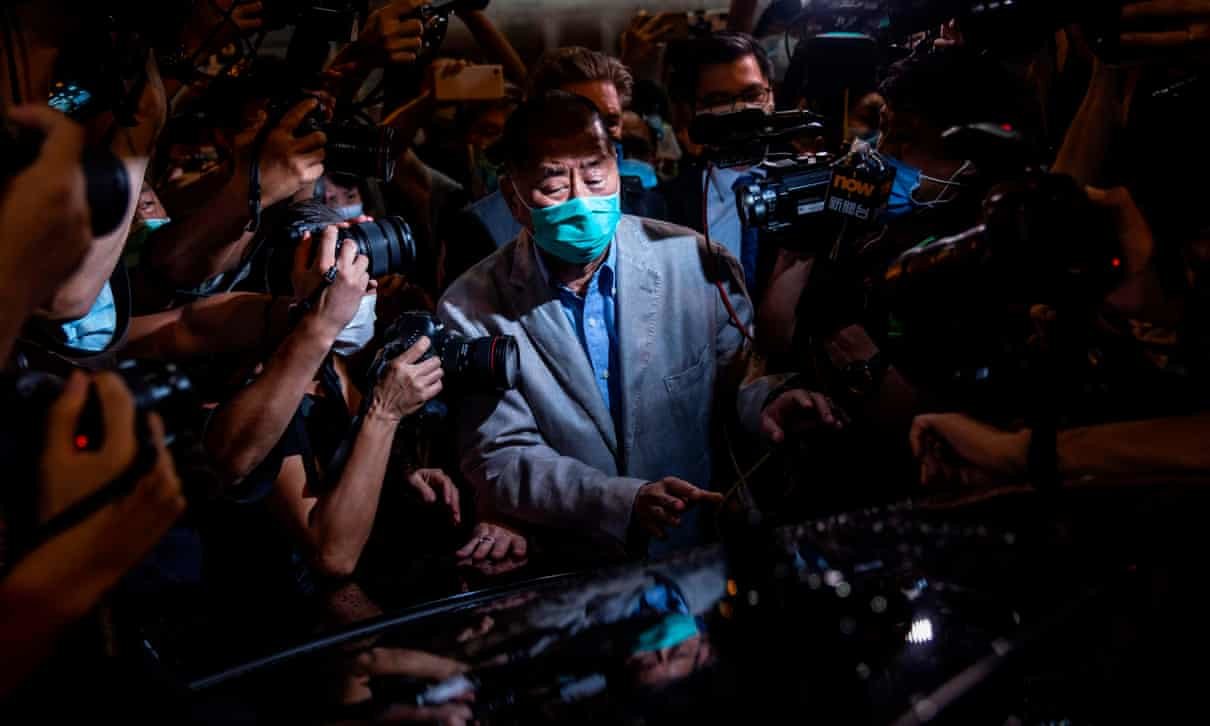 Pro-democracy activist says he did not expect to be arrested so soon given the global outcry, and that it suggested chaos in the ranks
Jimmy Lai has said he was surprised to be arrested so quickly, and suggested there was “great disorder” among Chinese and Hong Kong authorities about how to handle the territory’s national security law.

The 71-year-old media tycoon and prominent pro-democracy figure was arrested on Monday, on suspicion of committing foreign collusion crimes in breach of Beijing’s national security law, and conspiracy to defraud.

Nine others were also arrested, including his two sons and four senior executives at his company Next Digital Media, the publisher of Apple Daily, Hong Kong’s largest daily tabloid. Separately, Agnes Chow, a young pro-democracy activist, was also arrested on foreign collusion accusations.

In his weekly live stream from Apple Daily, Lai said on Thursday that he had expected to be arrested under the laws, which came into force on 30 June, but was surprised it had happened so quickly while the world’s attention was still on Hong Kong.

“I thought that China, with such a strong response from the international community … at the implementation of the national security law, I thought they would keep a low profile to make sure the international community was comfortable with it, the investors, the businessmen … that the national security law had calmed everything down and we hadn’t done anything,” he said.

When the law was implemented, Hong Kong and Beijing authorities were adamant it would be used to target only a small minority, and would not affect people’s lives and freedoms. They have also been at pains to reassure the foreign business community there was no need to leave the international finance hub.

Since its implementation, about 30 people have been arrested for crimes including carrying a pro-independence flag, and schools and libraries have been told to remove “subversive” texts from shelves. Pro-democracy politicians have been disqualified from elections, and media organisations have taken down interviews with dissidents.

Chinese-language newspaper in Hong Kong, Ming Pao, reported on Thursday the public broadcaster, RTHK had removed a recorded discussion which included Nathan Law, a former legislator and activist who has since fled to the UK, and who is reportedly wanted by police under the national security law.

Lai also said he was less fearful of being transferred to the mainland, which has jurisdiction over the more seriously ranked offences, because the entire arresting team were Hongkongers and not speaking a mainland language, he said.

The new police force established under the national security law has been shrouded in secrecy, but Lai said he didn’t think he came across anyone from mainland China.

“They were all Hong Kong police. Maybe the force takes orders from China, I don’t know, but it seems the whole team is a Hong Kong team so I don’t think they have the intention of taking me or anyone to mainland China,” he said.

“Maybe if they decided I’ve done something really subversive ... but as of this moment I rest assured I won’t be taken to China.”

Recent comments in Chinese state media however have left open the possibility of a transfer. Reports have said that while the case is being investigated by the police department, the national security office set up by Beijing in Hong Kong could take over it the case was deemed “complicated”.

“Since the case may involve complicated foreign-related factors, if further evidence leads are difficult to investigate, the possibility of participation or even takeover by the National Security Office of the Central Government in Hong Kong cannot be ruled out,” said Beijing academic and supporter of the national security laws, Tian Feilong.

Lai was held for more than 40 hours. He was frequently seen in public during that time, being walked around in handcuffs by police, including through the Apple Daily newsroom.

Several reports described it as a perp-walk, but Lai said his other movements “were not intentional displays”. He said they had to move police stations because the power went off at the precinct, and then again when the fingerprint machine didn’t work.

Lai said the international support for him and the movement “brings us confidence to know what we are doing is right”.

“What we are doing to protect our city is the right thing to do because so many people have our backs.”
Add Comment