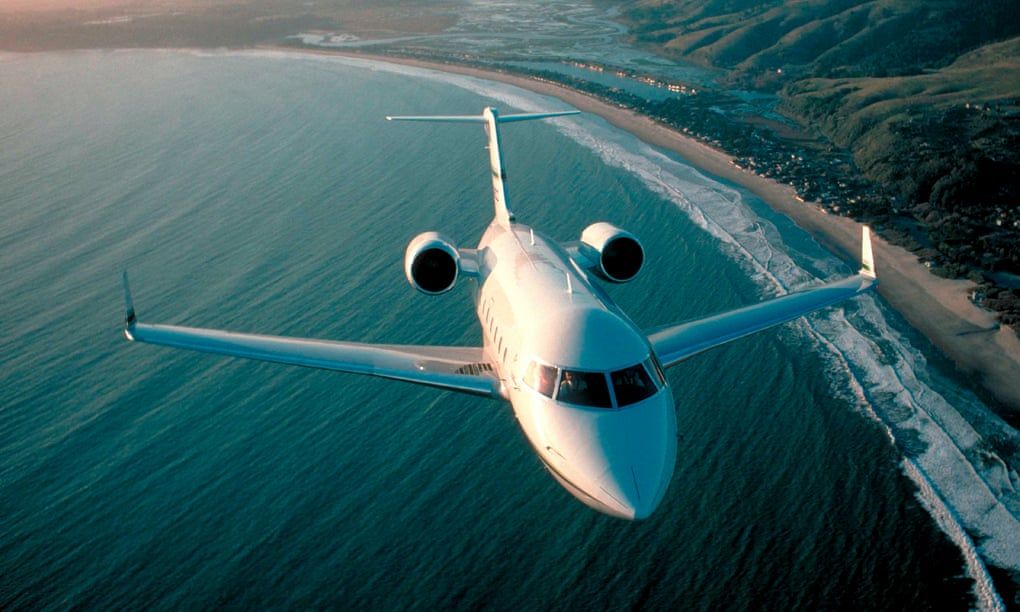 Exclusive: Guardian data investigation finds flurry of movement after invasion of Ukraine, with many flights to UAE

Private jets linked to Russian oligarchs and officials appeared to continue flying into and out of EU and UK airports despite flight bans and sanctions imposed after Russia’s invasion of Ukraine, a Guardian data investigation found.

While some plane movements appeared to comply with airspace bans and sanctions, including asset freezes, others appeared to escape restrictions.

Guardian analysis also showed jets linked to Russians under sanctions flew to the United Arab Emirates in greater numbers during the week after the start of the invasion than any other week of 2022.

The UAE is popular with Russians as a finance and leisure centre.

Movements of jets linked to oligarchs under sanctions

Flight data does not indicate who was on board 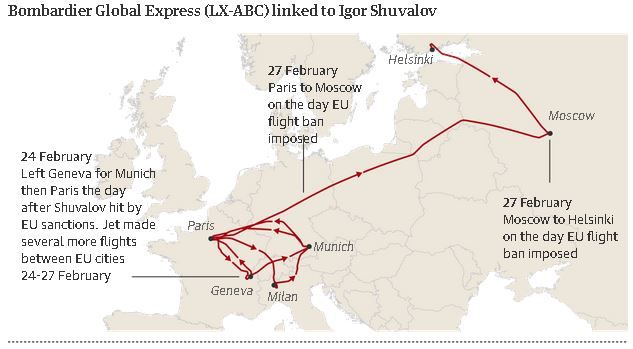 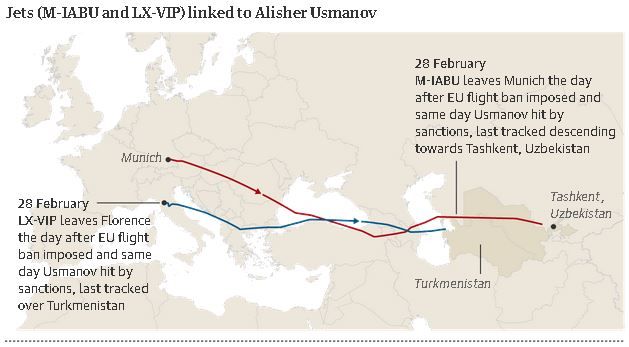 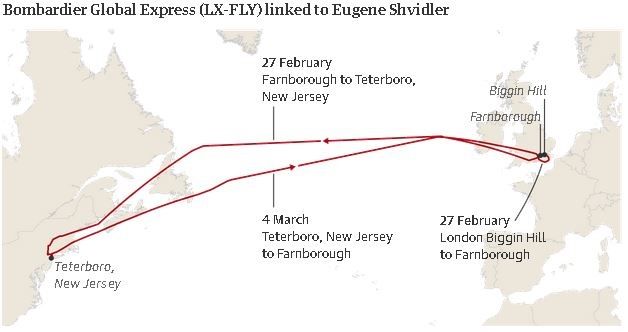 Jets linked to Shuvalov were tracked flying into and out of EU airports after sanctions were imposed by the bloc on 23 February, the day before Russia began its invasion of Ukraine.

His Bombardier Global Express jet, registration LX-ABC, made several flights between Geneva, Munich, Paris, Milan and Helsinki after that date, according to data provided by the flight tracking service Flightradar24. The records do not include details of who was on board the plane, which typically sells for $10m (£7.6m).

EU sanctions rules allow those targeted by the restrictions to make payments to meet “basic needs” such as legal fees but do not mention expenses associated with the movements of private planes, such as buying jet fuel.

The Uzbekistan-born billionaire Usmanov, who is a former 30% shareholder in Arsenal and the owner of USM, which was a major sponsor of Everton football club until earlier this month, is linked to two other multimillion-pound jets.

Both planes flew out of EU airports after “Russian-owned, Russian-registered or Russian-controlled aircraft” were banned from EU airspace by the president of the European Commission, Ursula von der Leyen, according to data from ADS-B Exchange, a website that collects live aircraft transponder data.

Usmanov’s Airbus A340, the commercial version of which can seat 370 passengers, left Munich on the evening of 28 February and was last recorded descending over Tashkent that night.

The jet, which is decorated with distinctive maroon livery, cost between $350m and $500m and is one of the largest private jets in Russia, according to the US Treasury, which said its tail number, M-IABU, stands for “I’m Alisher Burhanovich Usmanov”.

The flight took place the day after the EU flight ban was imposed and the same day Usmanov was added to the bloc’s sanctions list.

An Airbus A340 linked to the Uzbekistan-born billionaire Alisher Usmanov.

The second jet left Florence in Italy the same day and was also heading towards Uzbekistan when the transponder signal was lost over Turkmenistan.

A spokesperson for Usmanov said sanctions against him were based on “incorrect” assumptions about his relationship with the Kremlin, adding that his assets, including private jets, had been transferred to irrevocable trusts long before sanctions were imposed against the billionaire.

“[We] deny there was any wrongdoing or attempt to avoid any assets being sanctioned,” the spokesperson said. “Given the fact that the MI-ABU jet you invoked is not owned or controlled by Mr Usmanov, and could only be used by him on lease terms, there is no legal grounds for any ban on it in relation to the individual sanctions imposed against him.

“Regarding compliance with the rules of aircraft departures, our detailed legal analysis found no violations. To the best of our knowledge, the departure was made in accordance with the permission of the authorised authority of the country from which the aircraft departed.”

The spokesperson did not respond to an inquiry about whether Usmanov was onboard either of the flights.

While some of the jets remain out of the reach of authorities despite being linked to oligarchs under sanctions, other aircraft have already been seized or barred from flying.

Jets linked to Abramovich have also been active in the weeks since the Ukraine invasion, which has resulted in the Chelsea FC owner being sanctioned by the UK and the EU.

One, a Bombardier Global 6000, registration LX-LUX, is now grounded in Latvia, denied permission to leave by the authorities pending confirmation of its ownership by authorities in Luxembourg, where the plane is registered.

If it is found to belong to Abramovich, who has been linked to at least three other private jets, it will be considered a frozen asset, Aivis Vincevs, of Latvia’s Civil Aviation Agency, told the news website Re:Baltica.

A close associate of Abramovich, Eugene Shvidler, has also had two jets seized by UK authorities, at London Biggin Hill and Farnborough airports.

A spokesperson for Shvidler said there had “never been any breaches” and that he was not a Russian citizen and did not have any ties to the Kremlin.

Aircraft that visited the UAE include some of those linked in previous reports to Abramovich and the Ukrainian opposition politician Viktor Medvedchuk, as well as Russian businesspeople Andrey Guryev, Andrey Melnichenko and Oleg Deripaska.

The UAE has been described as the “Switzerland of the Persian Gulf” by organisations including Tax Justice Network, owing to its high degree of banking secrecy, suggesting oligarchs barred from other financial centres may have travelled there to organise their financial affairs. 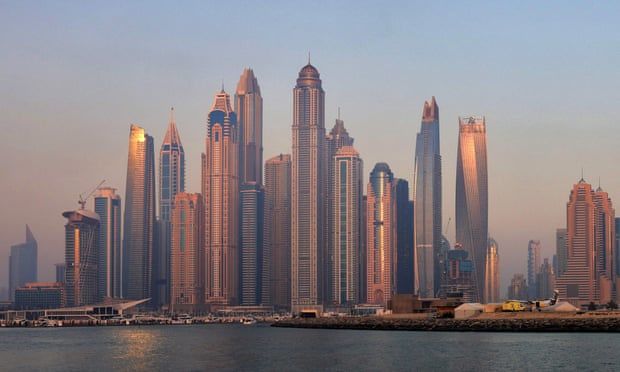 A jet reportedly linked to Melnichenko, a billionaire whose superyacht was seized by Italian authorities earlier this month, flew to Dubai on 9 March, according to Flightradar data. The Boeing 737 is currently under investigation in Luxembourg, where it is registered.

A spokesperson for Melnichenko said he was an international self-made entrepreneur who had “no relation to the tragic events in Ukraine”.

“He has no political affiliations. There is no justification whatsoever for placing him on any sanctions lists.”

A spokesperson for Deripaska said sanctions against him were “deeply misguided”.

“The decision to sanction Mr Deripaska has nothing to do with justice or law, neither does the freezing of assets belonging to him or his family. Therefore, as he already stated on his Twitter account, it will be for the courts and the police to discover the true origins and beneficiaries of this decision.”

Spokespeople for Abramovich, Shuvalov, Medvedchuk and Guryev did not return requests for comment.