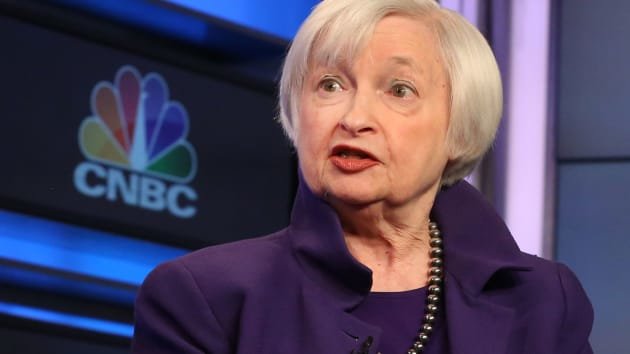 Former Fed Chair Janet Yellen said the U.S. economy is in “excellent” shape but facing several risks. One of the most prominent is in wealth disparities that she said are “extremely disruptive.” In a downturn, the Fed would have little room to move, due to low rates, she added. Yellen also said tariffs the U.S. has leveled on Chinese imports aren’t doing any good.

Pronounced wealth inequality that has built up for decades poses a major threat to a U.S. economy that is in otherwise “excellent” shape, former Federal Reserve Chair Janet Yellen said Thursday.

The central bank leader from 2014 to 2018 also said the U.S.-China tariff war is having a detrimental impact both on businesses and consumers through higher prices and a general air of uncertainty.

While she doesn’t see a recession on the horizon, she also noted that the risks are piling up.

“I would bet that there would not be a recession in the coming year. But I would have to say that the odds of a recession are higher than normal and at a level that frankly I am not comfortable with,” Yellen said at the World Business Forum.

With three rate cuts this year, there remains “not as much scope as I would like to see for the Fed to be able to respond to that. So there is good reason to worry.”

One particular area she cited was inequality, specifically the extent to which benefits during the longest expansion in U.S. history have flowed mostly to top earners and those with post-high school education levels.

“It’s a serious economic problem and social problem because it means the gains of our economic system are not being widely shared,” she added. “It leaves people ultimately with the feeling that the economy is not working for them, a sense of social discontent that is extremely disruptive.”

For the past year and a half, the U.S. and China have been lobbing tariffs back and forth on billions in goods as part of the White House’s efforts to level the global playing field and halt the theft of technology and intellectual property.

“I see no sign that that’s been successful in turning around these trends,” she said of the protectionist trade actions. “These tariffs are taxes on American consumers and businesses. It’s making it more difficult and more expensive to do business, to control costs, and consumers are seeing higher prices from it.”

Yellen also acknowledged the burden that some of the Fed’s own policies, such as historically low interest rates, put on Americans.

She recalled getting emails during her time from people trying to save for retirement but were being penalized by low interest rates.

The Yellen Fed held the near-zero short-term rates that came into play during and after the financial crisis. She oversaw just two rate increases and the beginning of a reduction in the bonds the Fed holds on its balance sheet, the product of stimulus efforts during and after the crisis.

“Some of the most disturbing notes came from people who said, ’I work and I played by the rules and I save for retirement and I have money in the bank, and you know, I’m getting absolutely nothing,” Yellen recalled. “Savers are getting penalized. It’s true.”
Add Comment