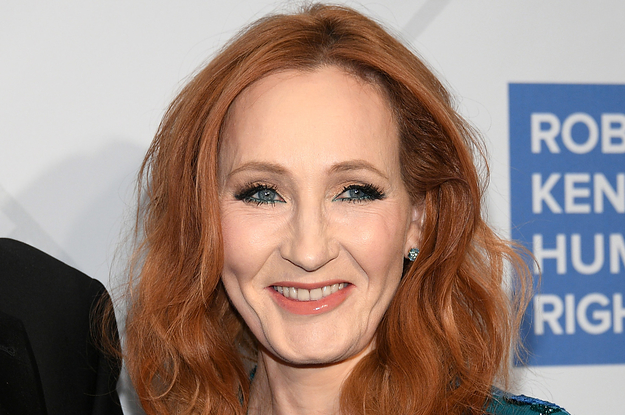 J.K. Rowling Followed Up Her Anti-Trans Tweets With A Full Anti-Trans Essay

"The fear, ignorance, and callous cruelty underneath JK Rowling’s words are the same sentiments that lead to the murder and systemic destruction of black trans lives."

Harry Potter author J.K. Rowling doubled down on her recent anti-trans comments, releasing an extensive statement about her fears of "current trans activism," which recycles dangerous anti-trans stereotypes and cliches.

On Wednesday, Rowling published the essay to her personal website, which she tweeted out with the phrase "TERF wars" - a reference to the supposed turf wars between trans activists and TERFs (or trans-exclusionary radical feminists) about "current trans activism."

In it, Rowling repeatedly writes about her belief in the importance of "biological sex," or the sex people are assigned at birth.

Noting the harrowing accounts she'd read by trans men about gender dysphoria, Rowling says, "if I’d been born 30 years later, I too might have tried to transition," as she had experienced mental health issues and struggled with her body as a teenager.

"The allure of escaping womanhood would have been huge," Rowling writes. "If I’d found community and sympathy online that I couldn’t find in my immediate environment, I believe I could have been persuaded to turn myself into the son my father had openly said he’d have preferred."

"Trans people need and deserve protection," Rowling adds, in one of many lines in which she makes clear she doesn't believe trans women are women. "Like women, they’re most likely to be killed by sexual partners."

Nearly 4000 words for JK Rowling to come out as Mike Pence feels a bit excessive.

Journalist and activist Serena Daniari spoke out about Rowling's "dangerous, ill-informed views," and criticized her for "simultaneously denying our humanity & relentlessly attacking us."

J.K. Rowling’s essay is dangerous hogwash that will only hurt trans people and reinforce a gender binary that oppresses women but go off, I guess.

Other activists called on people to donate to trans organizations.

In all seriousness though, J.K. Rowling is the worst kind of transphobe, because she somwhow has convinced herself that she has love & compassion for trans people while simultaneously denying our humanity & relentlessly attacking us. She should just admit she hates trans people.

Last December, Rowling tweeted her support for Maya Forstater, a woman who was fired for saying transgender women should not be legally recognized. Rowling's latest statement comes after major backlash over the weekend, when she tweeted a link to an article mocking the line "people who menstruate," which many pointed out was an anti-trans comment since many women don't menstruate (and some men do).

Instead of reading J.K. Rowling's transphobic screed on how she's oppressed for being a bigot, you should donate to the COVID relief fund organized by SisTers PGH. A black lead trans organization dedicated to community support and mutual aid in my city. https://t.co/pbRo0yOVHF pic.twitter.com/mkye3noH8t

In her expanded statement on Wednesday, Rowling also revealed that she had been a victim of sexual assault and domestic abuse. She said this experience made her even more focused on biology, "out of solidarity with the huge numbers of women who have histories like mine, who’ve been slurred as bigots for having concerns around single-sex spaces."

Bathrooms have been one of the biggest trans issues politically, with multiple US states and counties trying to ban access to single-sex public restrooms in order to limit the rights of trans people.

Rowling also argued that people should use the bathroom of the sex they were assigned at birth, even if statistically it is trans people who are more likely to be assaulted or attacked in a bathroom setting.

"So I want trans women to be safe," the author wrote. "At the same time, I do not want to make natal girls and women less safe. When you throw open the doors of bathrooms and changing rooms to any man who believes or feels he’s a woman – and, as I’ve said, gender confirmation certificates may now be granted without any need for surgery or hormones – then you open the door to any and all men who wish to come inside."

But gender confirmation certificates aren't so easily granted in the UK. Applicants for the certificate must be over 18, diagnosed with gender dysphoria (and provide medical evidence from a doctor or psychologist), have lived as that gender for at least two years, and intend to live in it “for the rest of your life.”

Single-sex bathrooms were first introduced into US society because of historical beliefs that women should not be entirely integrated into society and were biologically inferior to men.

“Any statement to the contrary erases the identity and dignity of transgender people and goes against all advice given by professional health care associations who have far more expertise on this subject matter than either Jo or I,” he added.

His fellow Harry Potter costar, Emma Watson, also pushed back in a tweet on Wednesday, saying, "Trans people are who they say they are."

‘People who menstruate.’ I’m sure there used to be a word for those people. Someone help me out. Wumben? Wimpund? Woomud?

"As someone who has worked with both J.K. Rowling and members of the trans community," Redmayne said, "I wanted to make it absolutely clear where I stand. I disagree with Jo’s comments. Trans women are women, trans men are men and non-binary identities are valid."

In her Wednesday letter, Rowling spoke out against the criticism she's received. She said she won't stop talking about her anti-trans comments because she believes she is helping women.

"It would be so much easier to tweet the approved hashtags – because of course trans rights are human rights and of course trans lives matter – scoop up the woke cookies and bask in a virtue-signalling afterglow. There’s joy, relief and safety in conformity," she wrote.

However, Jen Richards, the Mrs. Fletcher and Tales of the City star and trans activist, wrote about the frustrations of Rowling's anti-trans comments at a time when the world's political focus is on the Black Lives Matter movement.

“The fear, ignorance, and callous cruelty underneath JK Rowling’s words are the same sentiments that lead to the murder and systemic destruction of black trans lives," Richards wrote.

Here's all I really want to say about #JKRowling. tl/dr The best way to fight TERF ideology is to commit to dismantling white supremacy. pic.twitter.com/mpSj2yoYQr

“But all white women have a choice right now: aggressively defend a narrow, exclusionary concept of manhood that is fundamentally and irrevocably racist, or commit wholly to dismantling white supremacy," Richards added. "JK Rowling, like many white women, has chosen the former.”