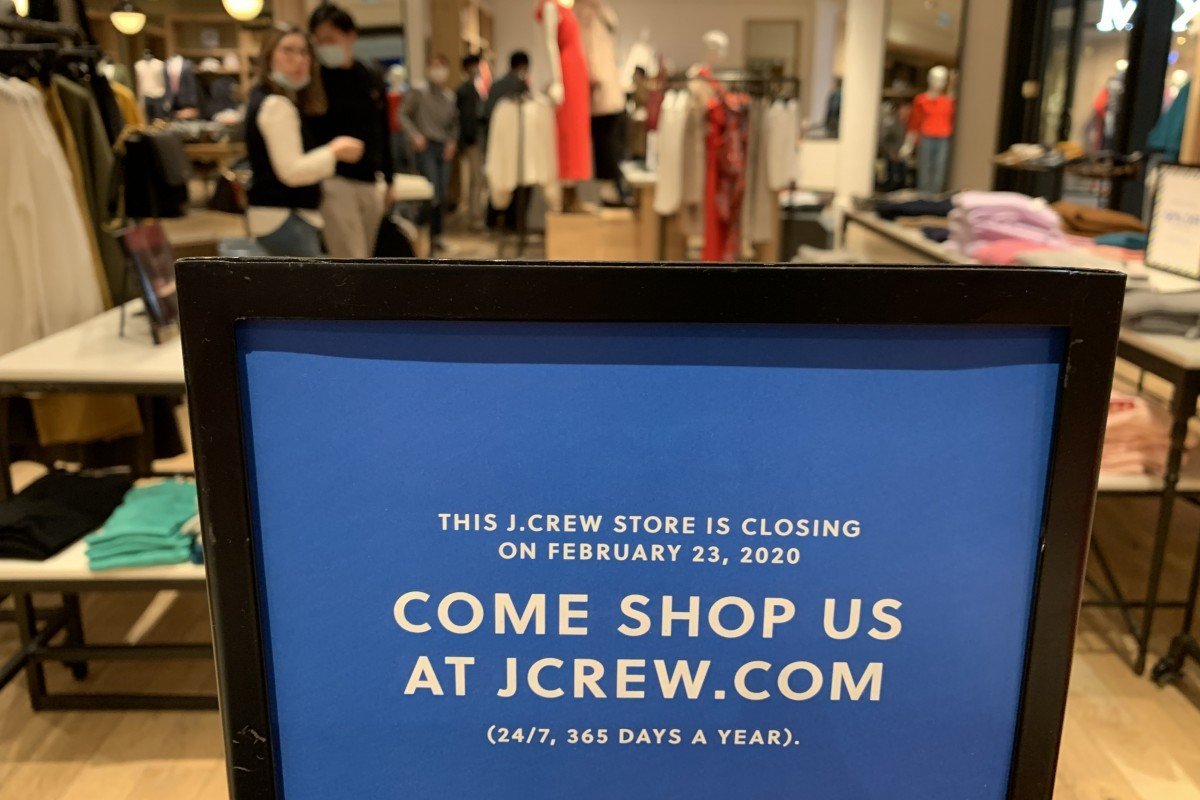 US retailer to shut both shops in city. Coronavirus has ‘turned business from bad to worse’ for luxury brands, restaurants, Savills says

J.Crew Group, the US retailer of menswear and womenswear, is closing its stores in Hong Kong, according to staff at both its locations in the city.

“The stores in Causeway Bay and near Lan Kwai Fong will be closed on February 23,” a sales staff member at its Times Square location said on the weekend. A sales person at the brand’s second store, which sells only menswear, on 9 On Lan Street, also confirmed the closure. J.Crew was unavailable for comment. It is expected to announce its third-quarter result this week, on Wednesday, February 12, in the United States.

A notice at its Times Square shop said: “This J. Crew store is closing, but there’s still time to shop with 50 per cent off your purchase.”

Wharf Real Estate Investment, which owns and operates Times Square, too was unavailable for comment on the closure and the brand’s monthly rental, but industry experts said the 1,500 sq ft shop would cost less than HK$1 million (US$128,774) a month.
J.Crew joins a list of big names shutting shop in Causeway Bay, the world’s most expensive shopping district. In January, luxury brand Louis Vuitton said it was shuttering its 10,000 sq ft store in Times Square. The company, which pays an estimated HK$5 million a month in rent, decided to close the store after Wharf turned down a request for lowering its rent. In August, the South China Morning Post revealed Prada was closing its 15,000 sq ft store at Plaza 2000, across the street from Times Square, for which it paid HK$9 million in monthly rent.

“Retailers selling luxury goods, top fashion brands and restaurants had already seen their sales plunge significantly after the eight-month-long anti-government protests in the second half of last year. Now, the outbreak of the coronavirus has turned their business from bad to worse, with locals as well as tourists too scared to go out at all, ” said Peter Yuen, head of the investment department at Savills.

The outbreak, which originated in the central Chinese city of Wuhan, has claimed more than 810 lives and infected at least 37,500 people, mostly in mainland China. In Hong Kong, there has been one death, with at least 26 people infected.

International and mainland Chinese travellers account for up to 70 per cent of all luxury purchases in Hong Kong. Starting Saturday, all travellers from the mainland entering Hong Kong, including local residents, are required to go into quarantine for 14 days. This is expected to lead to further declines in the number of such travellers.

Unsurprisingly, retail sales have plummeted. Burberry Group, for instance, said its sales in Hong Kong declined by half in the third quarter because of the protests. In November, retail sector sales plunged 23.6 per cent year on year, for their second-largest drop on record, according to Census and Statistics Department data released last month.

“Some retailers saw their sales drop by 80 per cent to 90 per cent, with hardly any shoppers seen in the streets. In this case, some retailers would prefer to close their shops when they don’t see a full recovery in business in sight,” Yuen said.