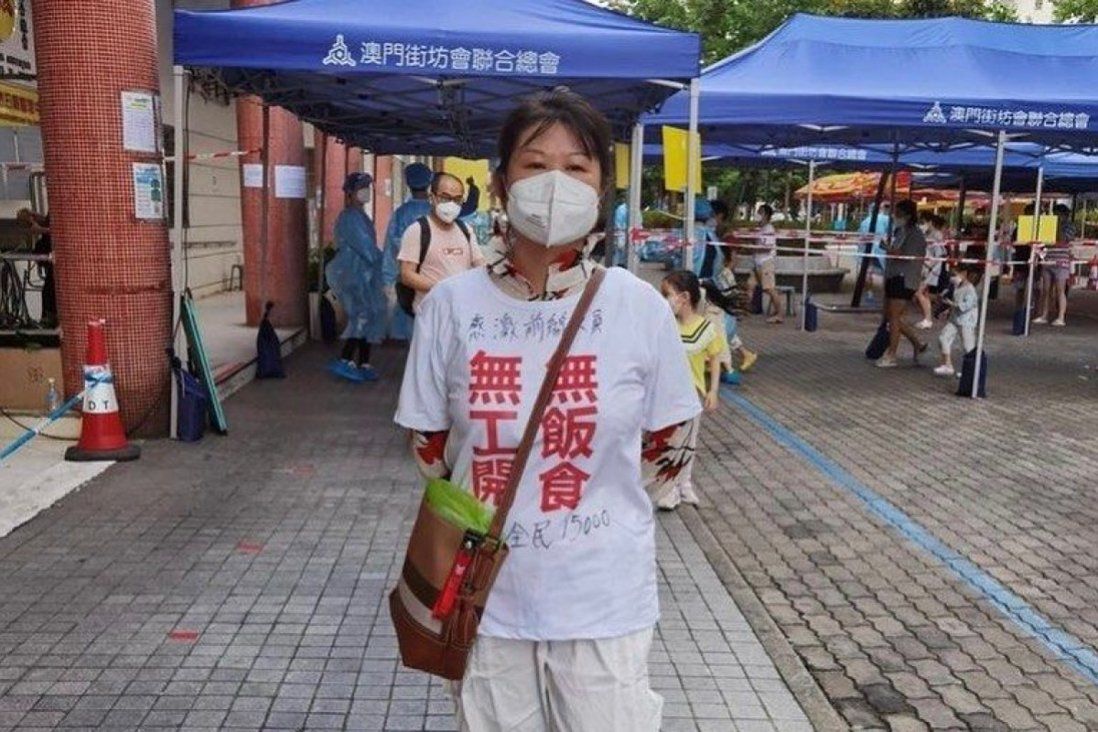 ‘It is a witch-hunt for violators’: Macau residents bristle at extended lockdown

Residents and workers are growing impatient with being confined at home and losing out on salary, with rare displays of protest emerging.

Rumblings of public discontent have emerged in Macau, better known for its glitzy casinos than anti-government protests, as residents endure an extended lockdown ordered by authorities to contain surging Covid-19 infections.

Social media has been flooded with pictures of residents in white T-shirts emblazoned with red Chinese characters stating “no jobs, no food” but also bearing handwritten messages of support for the government’s pandemic efforts and frontline workers. The photos were taken as residents headed to testing centres around the city, the sole reason aside from buying necessities they are allowed to leave their homes.

Macau on Monday entered its second week of lockdown, which has forced the closure of all non-essential businesses, including its 42 casinos that power its massive economy, leaving streets once bustling with tourists and punters eerily quiet. 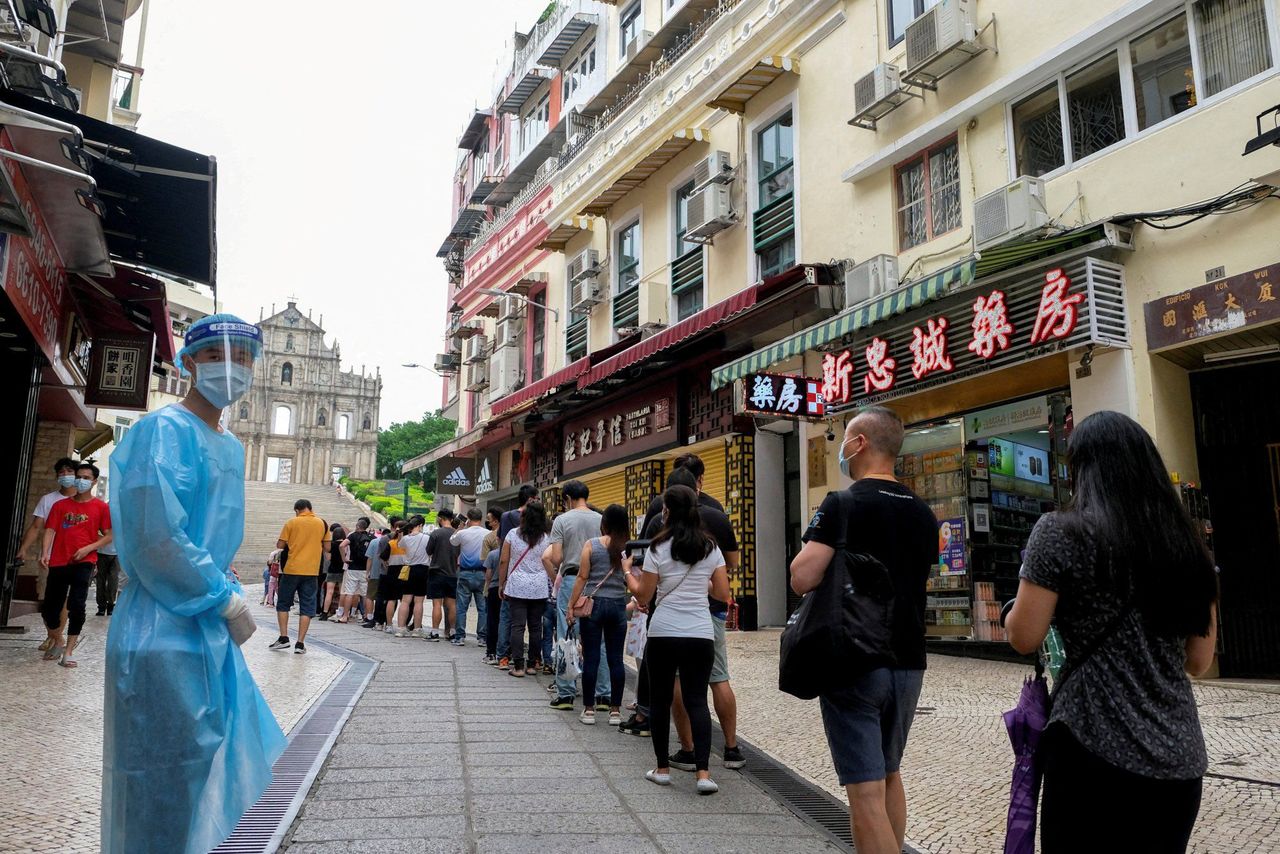 Residents line up for Covid-19 testing near the Ruins of Saint Paul’s in Macau last month.

Authorities are adhering to the “dynamic-zero” Covid-19 strategy favoured by the central government, which calls for stamping out cases using repeated mass testing and lockdowns, as opposed to the approach of living with the virus adopted by most countries.

While many of Macau’s 680,000 residents backed the government’s efforts, they were at the same time bristling at the restrictions, desperate to know when life might return to normal.

For 37-year-old teacher Mandy*, another week confined to her home meant more discomfort for her two dogs, who were used to regular walks outside.

“My dogs are already four years old, so it is impossible to retrain them [to defecate outside] in such a short period of time,” she said. “They do not know how … at home and can only hold it in.” 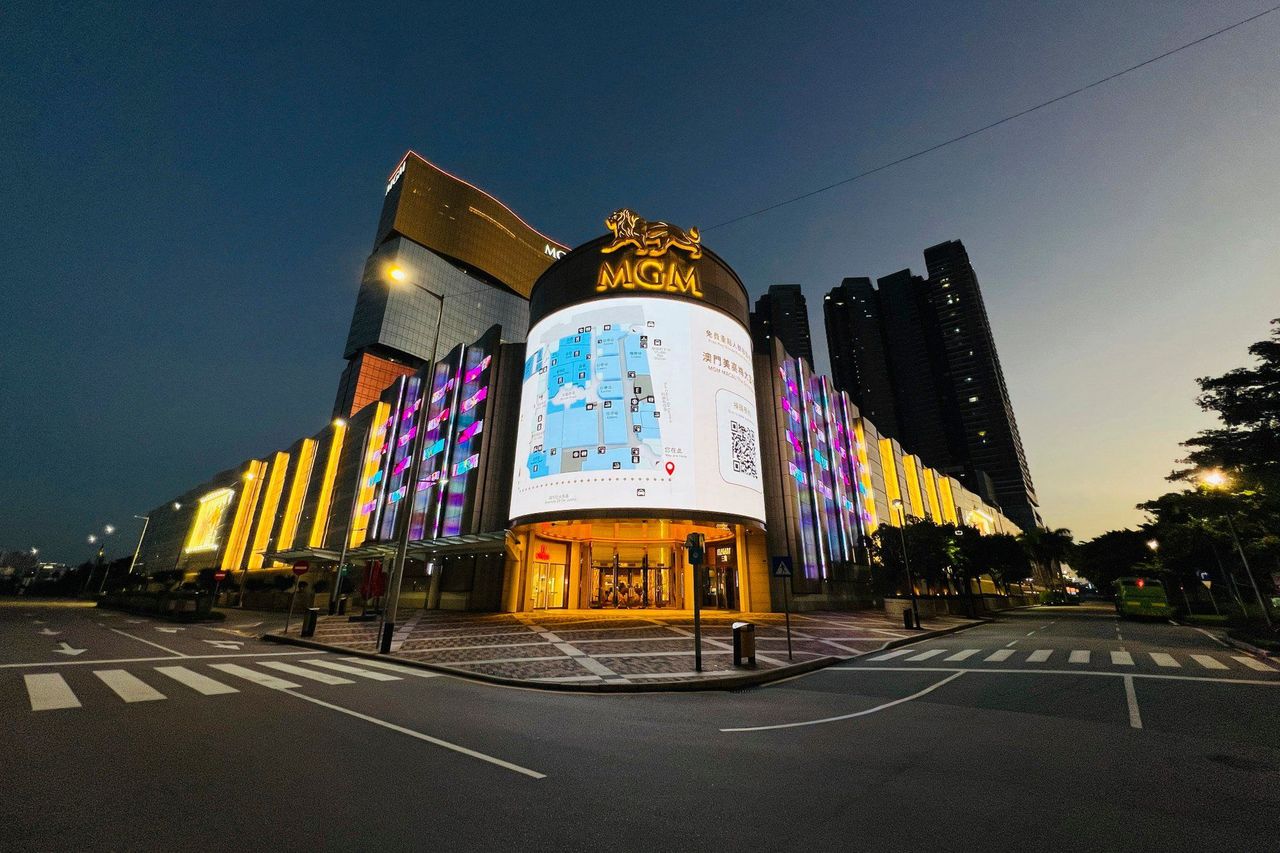 All casinos have been ordered to shut in Macau.

Mandy admitted she once sneaked out for a brief walk but then learned her friends had been warned by police over taking their dogs outside. She and her husband, who was also a teacher, were loath to break the law but Mandy said they struggled between caring for their pets and following the rules. Authorities have made 27 arrests over breaches of Covid-19 restrictions in the past week.

“I felt like a criminal walking my dog on the street. It is a witch-hunt for violators,” she said.

Casino staff have also been struggling with the drastic changes. Lai Cheong-kuong, a 40-year-old manager at the Grand Lisboa Macau, was one of the many workers asked to take their annual leave.

Lai said that before the pandemic broke out in 2020, the casino operated as many as 195 gaming tables per day, but by the time the lockdown was ordered, the number had fallen to 30, with each one earning only 20 per cent of their usual amount.

While the manager said he understood that cost savings were needed given the financial position casinos faced, Cloee Chao Sao-fong, chairwoman of the New Macau Gaming Staff Rights Association, expressed disappointment over the government’s position on labour rights during the health emergency.

She referred to a policy that freed employers from any obligation to pay workers during the shutdown, which was a reversal of the practice during the previous round of casino closures in February 2020.

“One casino worker reached out to me saying that he would be offered paid leave, but once the government announced that policy, the company changed its mind,” she said. “The government is [effectively] encouraging casinos to not pay their employees.

Casino workers who lived in mainland China could face further financial hardship, warned Lei Kwun-hei, president of the Gaming Employee Home. Some casinos had even required employees residing in Zhuhai and Hengqin to apply for paid leave in person, despite the extreme difficulty of crossing the border.

“Some were forced to go on no pay leave because they could not return to the casino,” he said.

The government pledged on Saturday to provide an additional 10 billion patacas (HK$9.7 billion) in handouts to struggling businesses, but Terence Chan Tai-lun, 37, said he was worried whether the two retail stores he owned at St Lazarus’ Church would survive should the stringent measures continue.

Calling the past week the “darkest time” he had endured since he started his business in 2014, Chan estimated he had lost 70,000 patacas in sales since the lockdown began.

“Mainland tourists make up at least 50 per cent of our sales,” he said. “Once our borders were closed and the entry restrictions tightened, our sales dropped by 90 per cent.” 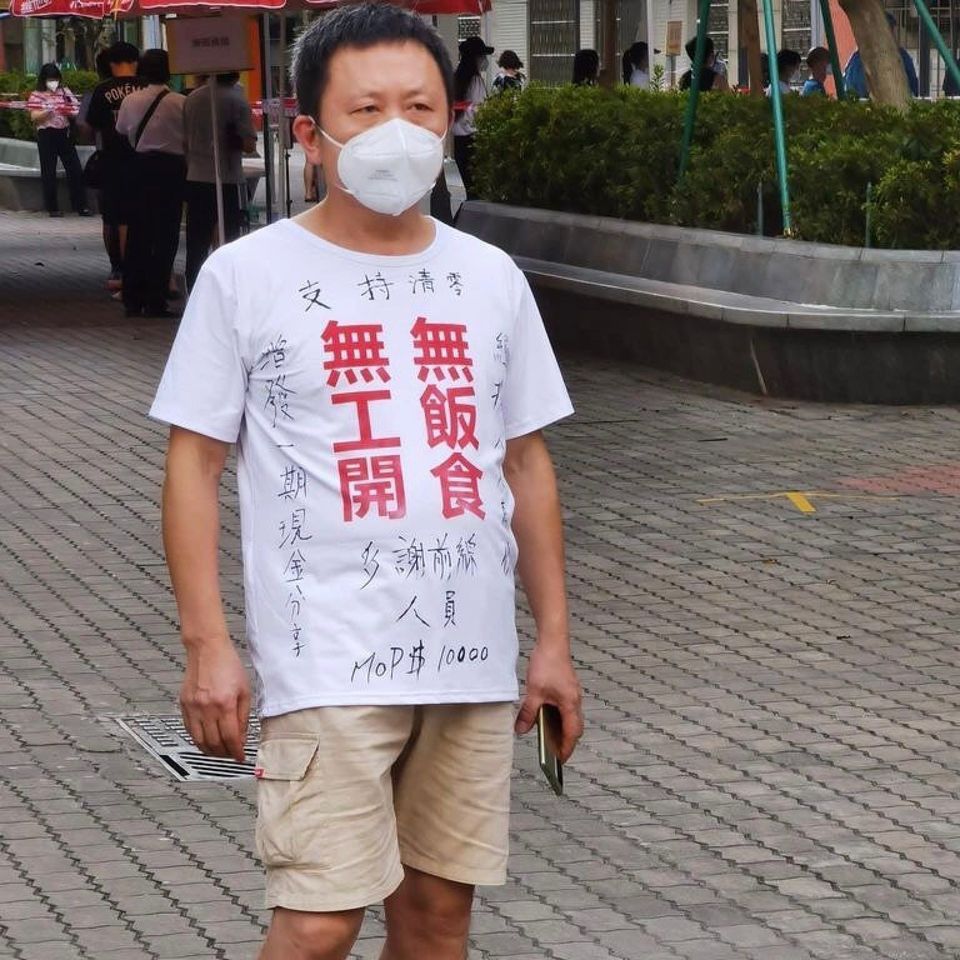 A resident wears a shirt stating “no jobs, no food”.

Joshua Long Kin-hou was similarly losing money with his interior renovation business because most of the construction materials were imported from the mainland and cross-border transport was now limited.

“The cost for logistics has doubled. It is really bad for business,” Long said, adding he had missed out on an estimated 300,000 patacas in sales this past week.

Health authorities reported only 15 new confirmed infections on Sunday, the fewest since the lockdown began, and only two preliminary cases were detected within the community as opposed to “supervised areas”, such as isolation facilities, compared with the 47 two weeks ago. The city’s tally of confirmed Covid-19 cases stood at 742 with five related deaths. Authorities keep a separate tally for suspected infections.

The upheaval was expected to continue for some time, given the Macau government was adhering so closely to the national “zero-Covid” strategy, said Hong Kong-based respiratory medicine specialist Dr Leung Chi-chiu.

“Measures for early intervention are drastic but effective considering the significant drop in the number of new infections found in the community in the past week, but it still takes some time, perhaps longer than a week, to approach zero,” he said. “Residents and businesses have to be patient.”

Former lawmaker Sulu Sou Ka-hou, now a deputy chairman of the pro-democracy New Macau Association, said the government should focus on reassuring workers over their rights to ease the simmering public anger.

“This involves a wide range of issues involving salaries, insurance and compensations. The government can’t simply stay vague and seek to tame the discontent simply with cash handouts,” he said.