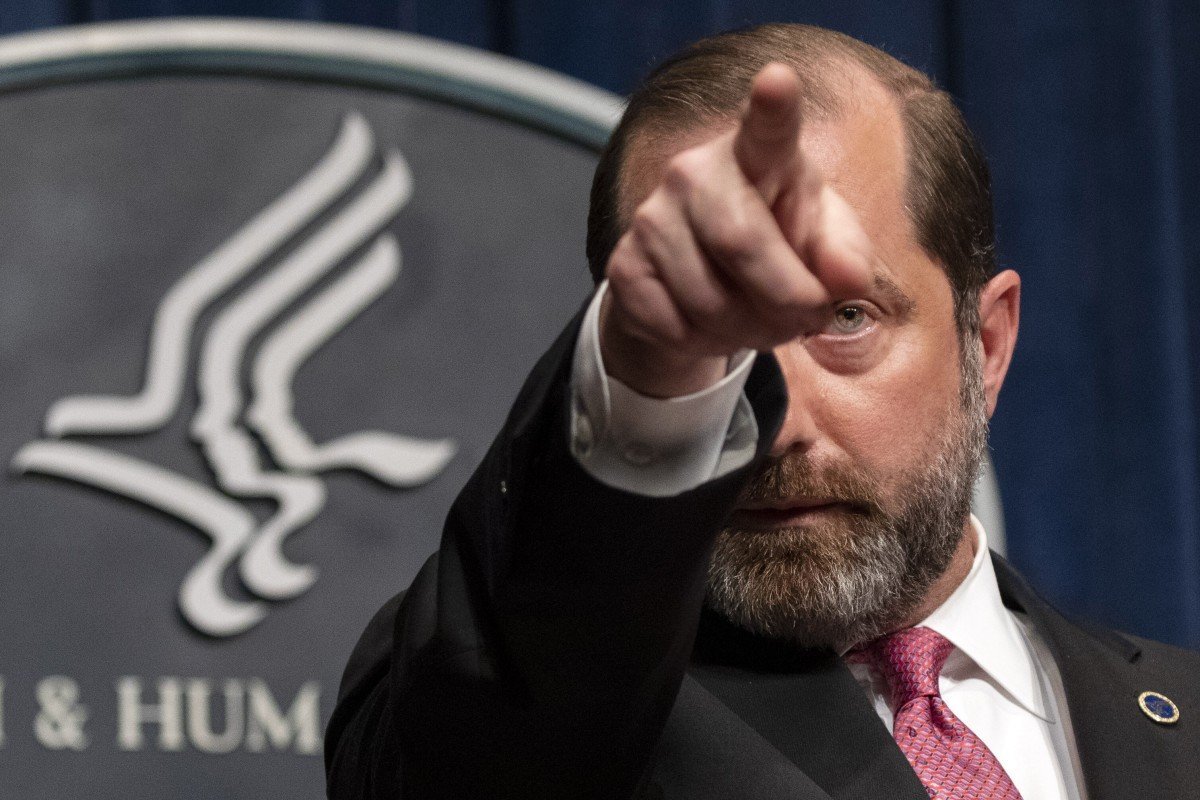 US Health and Human Services Secretary Alex Azar is set to lead a delegation to Taipei on Sunday, but observers say his trip is unlikely to herald the re-establishment of diplomatic ties.

The upcoming visit of a senior US official to Taiwan is evidence of the healthy relationship between the two sides and indicative of Washington’s dwindling concern about upsetting Beijing, observers say.

US Health and Human Services Secretary Alex Azar is set to lead a delegation to the self-ruled island on Sunday, according to Taipei. The American Institute in Taiwan (AIT), the United States’ de facto embassy in Taipei, also announced the visit but did not give a date.

Azar is the highest-ranking member of the US cabinet to visit Taiwan since Washington severed ties with the island in favour of establishing formal relations with mainland China in 1979. He is also the first senior US official to visit Taiwan since US President Donald Trump signed the Taiwan Travel Act into law in 2018.

Beijing has been critical of Azar’s planned trip, describing it as a violation of the “one China” policy the US promised to observe on the establishment of diplomatic ties with Beijing.

In contrast to the steadily worsening relationship between mainland China and the US, which has seen them clashing on issues from trade and technology to defence and human rights, ties between Taipei and Washington have improved significantly since Tsai Ing-wen was elected the island’s president in 2016.

Against that backdrop, some Taiwanese politicians have suggested there may be the possibility of a normalisation of US-Taiwan relations.

“The fact that the AIT has officially announced the planned visit of Azar and identified him as the highest-ranking cabinet member to visit Taiwan shows the United States has begun normalising its relations with Taiwan and no longer takes Beijing’s views into account,” said Wang Ting-yu, a politician from the ruling Democratic Progressive Party who sits on the parliamentary foreign and defence affairs committee.

The recent enactment of several pieces of legislation that support Taiwan was further evidence of normalising ties, he said.

Since 2018, the US Congress has approved at least five pieces of legislation relating to Taiwan, including the Taiwan Travel Act, which encourages high-level government exchanges between the two sides, and the Taiwan International Participation Act, which calls for the US to advocate for Taiwan’s membership or observer status in international organisations.

Last year saw the passage of the Taiwan Assurance Act – which mandates a presidential review of the state department’s guidelines on US-Taiwan relations and directs the defence department to include Taiwan in military training exercises – and the Taiwan Allies International Protection and Enhancement Initiative Act, which directs the state department to tell Congress about government moves aimed at strengthening Taiwan’s diplomatic relations “partners” in the Indo-Pacific.

At a meeting last month, Taiwan’s legislative speaker Yu Shyi-kun told pro-independence activists “it is not impossible that the United States will establish formal ties with Taiwan and recognise it diplomatically”.

“After the US changed its strategic policy to counter China, a number of US dignitaries, including vice-president Mike Pence and Secretary of State Mike Pompeo have spoken in support of furthering relations with Taiwan, which shares a belief in democracy, freedom and human rights, unlike China,” he said.

Michael McCaul, a senior Republican politician who sits on the foreign affairs committee, said recently that recognising Taiwan as a sovereign, independent country was the harshest punishment the US could inflict on Beijing.

But analysts are less optimistic about the re-establishment of formal ties between the US and Taiwan, given the likely fallout.

“Re-establishing a formal relationship with the Republic of China [Taiwan’s official name] is a very attractive and romantic proposal,” said Alexander Huang Chieh-cheng, a professor of strategic studies and international relations at Tamkang University in Taipei.

“But it would directly challenge Beijing’s red line – the ‘one China principle’ – and require extremely complicated diplomatic engineering that would bring chaos to all three capitals,” he said.

While there was undoubtedly a political message attached to Azar’s visit to Taiwan – it comes ahead of the Republican Party convention in the US – it was unlikely to derail the relationship between Washington and Beijing, Huang said.

“An official visit of this nature is unlikely to shake US-China relations,” he said, adding that Beijing was not so naive as to dance to Washington’s tune.

“If it is smart enough, Beijing will just hold its breath for three months until the US election result.”

However, Beijing may well react to Azar’s visit after hearing what he has to say, Huang said.

“If, for example, the secretary blasts China for hiding the truth about the coronavirus, then Beijing will definitely react strongly.”