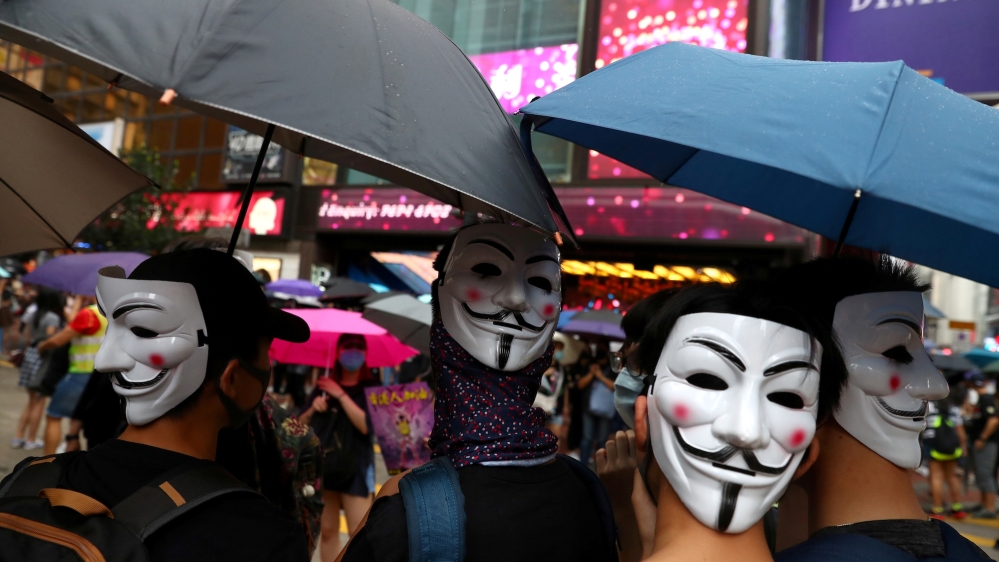 An internet shutdown would not only hurt the city's economy, but also encourage more violence.

On October 4, after four months of increasingly violent protests, Hong Kong's Chief Executive, Carrie Lam, invoked a colonial-era law allowing her to make "any regulations whatsoever" during a time of public danger.

She used it to ban face masks, which protesters have used to hide their identity or to protect themselves from tear gas, and warned she would use the powers to make new regulations if the unrest did not abate.

The protests, however, continued unabated, with thousands of masked pro-democracy protesters returning to the streets only hours after the ban to show the authorities that they have no intention of stopping.

The internet has been vital to these protests, with the encrypted messaging service, Telegram, and the online forum, LIHKG, enabling protesters to organise demonstrations. Given the significance of these platforms, there are now concerns that Lam is going to use her sweeping emergency powers to disrupt access to the internet.

The anxieties over a possible internet ban in Hong Kong were exacerbated on October 7, when Ip Kwok-Him, a pro-Beijing official, stated that the Executive Council "would not rule out a ban on the internet". The issue is still at the top of Hong Kong's agenda a week later, following the publication of an open letter by the pro-Beijing legislator Junius Ho Kwan-yiu urging Lam to block Telegram and LIHKG to "help stop violence".

Now, it looks more likely than ever that Lam will soon take the step to block, or at least restrict, Hong Kong citizens' access to the internet. However, as we have seen over and over again across the world, an internet shutdown would likely make the problems facing the Hong Kong authorities worse, not better.

Internet penetration rates in Hong Kong are among the world's highest. According to the most recent census, 80 percent of all households in Hong Kong have computers that are connected to the internet and almost 90 percent of businesses use the internet. Unsurprisingly, therefore, an internet blackout would spell disaster for the financial hub's economy. In fact, if the internet was inaccessible for just an hour, it could cost the economy over $17m, according to the COST tool developed by Netblocks and the Internet Society.

While an internet shutdown could easily destroy Hong Kong's economy, it may prove largely ineffective in stopping protesters from communicating with each other.

Since 2014, protesters in Hong Kong have circumvented network disruptions and potential government snooping by using mesh messaging apps. These apps work by using Bluetooth connections to bounce encrypted messages across the network until they reach their intended recipient. Importantly, they don't rely on cellular or mobile data networks which are often unintentionally disrupted in large crowds. According to a report by the BBC, Bridgefy, one of the most popular mesh messaging apps, had a 4,000 percent surge in downloads during July and August this year.

Hong Kong protesters could also use VPN services, which work by encrypting and rerouting internet traffic to a remote VPN server to allow users to bypass blocks and hide their internet activity from ISPs and governments, to remain connected in the face of a ban. According to Apptopia, an app measurement service, a VPN is currently the top-grossing app on the iOS App Store in Hong Kong.

Internet shutdowns have also been shown to change the nature of protests and, in many cases, increase levels of violence.

Earlier this year, Jan Rydzak, former associate director of programme at Stanford University's Global Digital Policy Incubator, published a working paper on the impact of internet restrictions on protests in India, where almost half of all known internet shutdowns have occurred.

His paper concluded that although "digital platforms are not critical to collective action ... removing them can turn a predictable situation into one that is highly volatile, violent and chaotic".

He told me in an interview that "disrupting people's access to the networks they use to communicate and coordinate is liable to only spark further anger and protest in the streets." He added that "in other countries, massive blackouts have been linked to escalations of violence spurred by information chaos and have proven futile against peaceful demonstrations."

Despite being ineffectual and carrying the risk of increasing the levels of violence, restrictions to internet services are already under way in Hong Kong. Some international companies already complied with demands to remove and block services that the authorities in the self-governing territory deem a cause for concern.

Last week, for example, Apple removed HKmap.live - a live map that showed where police forces were located around the city - and Quartz - a news app - from their App Store in Hong Kong and mainland China. Understandably, there are fears that the same demands could be made for VPN and mesh network apps to be removed from Hong Kong app stores. These services are already banned in mainland China.

Digital restrictions have repeatedly been shown to negatively affect the economy. More crucially they represent a flagrant disregard for freedom of expression, freedom of assembly and the right to information. They also do not appear to work as a means of quelling protests, and may even make conditions worse.

As was evident in the response to the face-mask ban, adopting draconian powers and curtailing citizens' freedoms only incenses protesters further. If Lam is serious about bringing the disruptions to an end, it is clear that meddling with the internet is not the right approach.