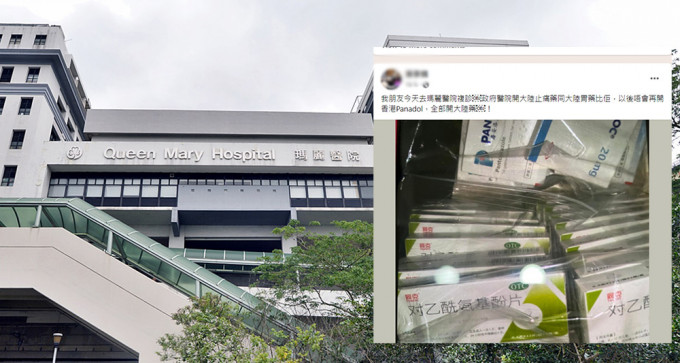 The internet is now caught up with the controversy of prescription of mainland-made drugs after a netizen claimed Queen Mary Hospital will not be giving out locally manufactured painkillers anymore.
In response, the Hospital Authority said drugs' quality and safety are top priorities when it comes to purchasing medicines. The authority will sometimes buy drugs from regions not stated in the contracts under special circumstances, like limited supply due to the pandemic.

The authority added it will only purchase relevant drugs after obtaining approval from the government and pharmacists will provide necessary details to front-line medics and patients to ensure the drugs are consumed correctly.

The controversy started after a netizen published a post on Facebook Monday, in which she said her friend was prescribed mainland-made painkillers and stomach drugs after seeing the doctor at Queen Mary Hospital.

The netizen also claimed: “There will be no more Hong Kong-made Panadol in the future,” and attached a photo of boxes of drugs, with simplified Chinese characters of the word Paracetamol, a painkiller, written on the package.

Other Facebook users soon flooded the comment section, with one or two echoing that they were also given mainland-made drugs.

“I didn't take the medicines after collecting them. I turned to the Panadol I purchased at the pharmacy instead,” one wrote.

Some questioned the netizen if this is true, while others pondered the question of why the hospital prescribed mainland-made drugs.
#Facebook
Add Comment