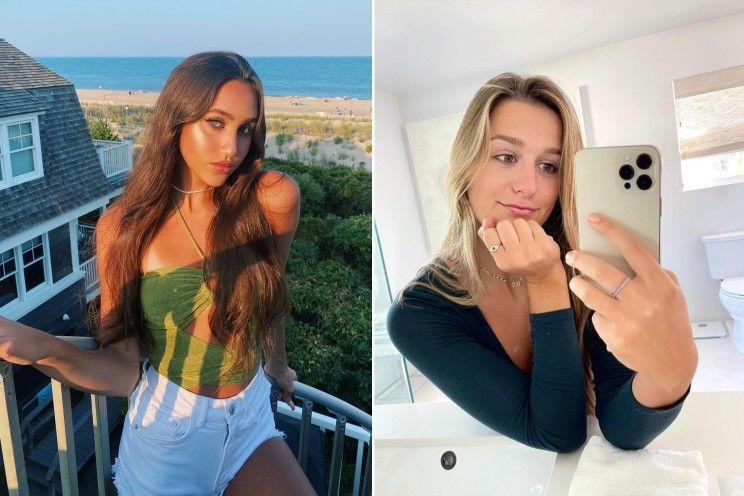 Instagram is wreaking havoc on young girls - and knows it

Real teens open up about how unrealistic body standards on Instagram are harming their mental health, leading them to crave plastic surgery and causing eating disorders.

When teenager Chloe Weinstein scrolls through Instagram posts by wildly popular, glamorous influencers such as Kylie Jenner, Daisy Keech and Madison Beer, she can’t help but envy their jet-setting lifestyles and compare her figure to their toned silhouettes.

Such feelings of inferiority have partly contributed to the 18-year-old’s desire for breast implants.

“I get down on myself as I’m often thinking: ‘How do [the influencers] look so good in bikinis, flaunting all the fun stuff they do in places like the Bahamas?’” Weinstein told The Post.

The college freshman of Randolph, New Jersey, is among the 32% of young, female Instagram subscribers identified by researchers as harmed by the platform. They found it exacerbates negative body image, low self-esteem, anxiety, depression and, in extreme cases, suicidal thoughts.

The March 2020 study was commissioned by Facebook, the company which acquired Instagram nine years ago. But executives like CEO Mark Zuckerberg and Karina Newton, Instagram’s head of public policy, buried the concerns it raised, according to the Wall Street Journal.

Newton posted on Instagram that while she believes the WSJ piece “focuses on a limited set of findings and casts them in a negative light,” she added that “we stand by this research.” 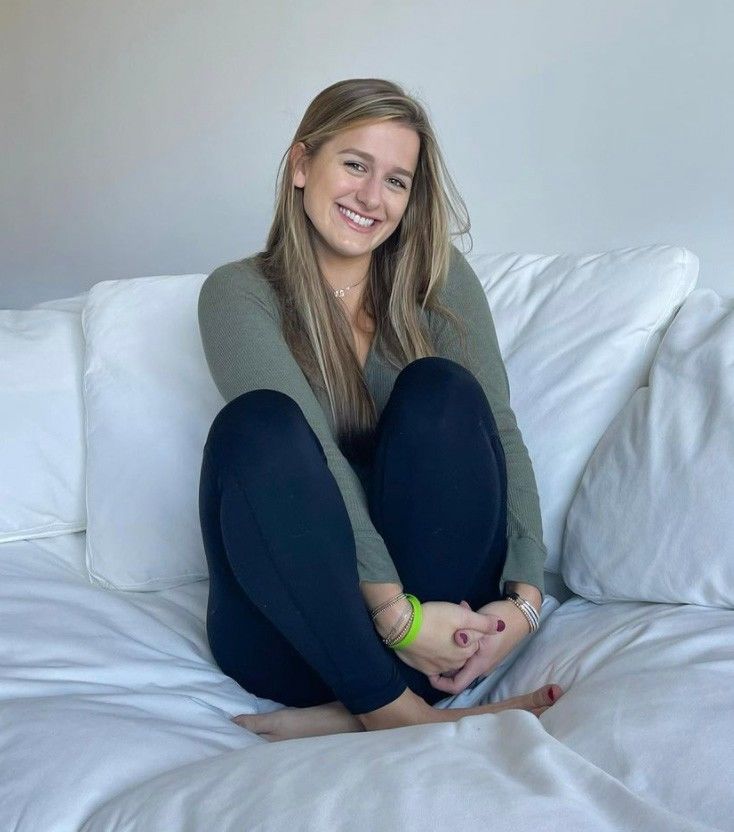 But their efforts don’t wash with social media influencer and TED Talk speaker Victoria Garrick. While acknowledging benefits of Instagram, such as facilitating connections across the world, the 24-year-old slams the constant promotion of “inauthentic,” doctored photos and other exaggerated aspirational content impossible for impressionable young girls to achieve.

Admitting to being part of the problem in the past, Garrick, who launched a lifestyle account in 2015, said: “When I first got on Instagram, I felt a pressure to portray a certain image. I edited and altered my photos and presented a highlight reel online.”

The constant fakery took its toll on her mental health and, after seeking therapy, she did a 180 by posting unfiltered pictures revealing her true, warts-and-all self. The LA resident, whose following has grown to 337,000 on Insta, now uses the hashtag #realpost and hopes other influencers and celebrities will follow suit. 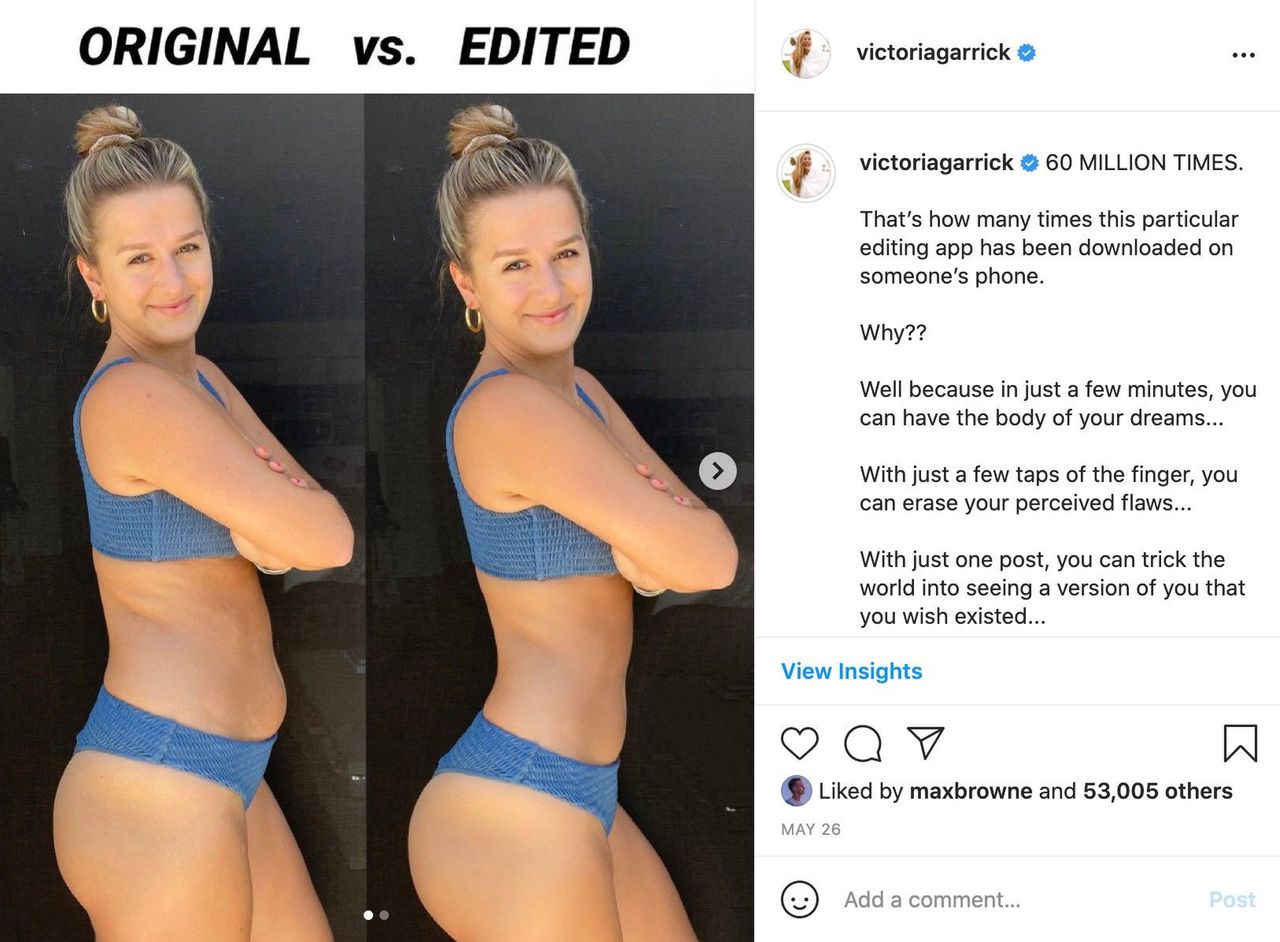 Posting side by side images of herself, Victoria Garrick showed her followers the easily done technique of “perfecting” women’s bodies using digital trickery.

This development would be welcomed by Arizona native Carolyn, a 16-year-old who who is currently in treatment for an eating disorder. The high school junior, who asked that her last name be withheld for privacy reasons, maintains that her unhealthy obsession with fitness was partially triggered by Instagram. It was made worse by the platform’s “Explore” function, which employs artificial intelligence to serve users with curated material similar to content they’ve previously viewed. In Carolyn’s case, once she showed an interest in body building and related workouts, she was bombarded with so-called “fitspiration” posts.

“If this is what social media is telling me that’s healthy, then I’m going to start doing those things,” she said. “I wanted to be like those people.”

The posts featured buff-looking gym rats with washboard stomachs and wasp-like waists. Diet advice came under headings such as “The Golden Pyramid of Fat Loss” and “Top Fat Loss Supplements,” and cutesy graphics and images of “healthy” portions.

Mercifully, Carolyn, who is now working with nutritionist Megan Kniskern, is more mindful of the damage Instagram can cause vulnerable teens.

“Instagram does not care for our well-being because they’re not going to filter out all the bad stuff that could hurt our brains,” she observed. “They just spit out the things that young girls my age click on — fitness workouts and posts about calories — which lead to fanaticism about our health.”

“There needs to be some level of responsibility for sure… I don’t know what that would look like.”

Indeed, changes Instagram can make are amorphous because content is user-driven. Activists such as Garrick say that it would be too big a hill to climb to have the platform monitor every post — banning filters would be impossible to police.

Instead, Garrick urges influencers and celebrities to take this matter into their own hands by being truthful about digitally enhancing their images. “I’d like to ask everyone for transparency,” Garrick said, suggesting those who use filters or PhotoShop add a hashtag or label to the picture signaling the alterations.

Filters aside, images of willowy stars are impossible to avoid on social media. For Gwenyth Harrington, a member of the adolescent and teen support group run by the National Association of Anorexia Nervosa and Associated Disorders (ANAD), pics of Gigi Hadid and Taylor Swift were some of the dangerous factors behind her eating disorder.

She was also negatively impacted by the platform’s “thinspiration” posts, which can often spark competition between young girls to look the skinniest of their peers.

The 17-year-old from upstate New York was twice admitted to the hospital where counseling helped her assess the damage caused by social media.

“I thought: ‘Wow! I need to unfollow people, especially the diet accounts and certain celebrities, cutting ties with them for the sake of my health,’” said Harrington. “Instead, I started following a girl who promotes body positivity in every one of her posts.

“It’s been a huge help and made me feel a whole lot better.”