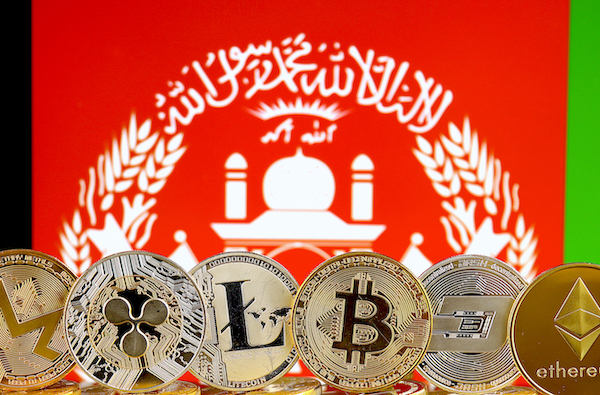 In the last week, he helped his family of ten flee the province of Zabul in southern Afghanistan and travel 97 miles to a city on the Pakistani border. But unlike others choosing to leave the country, once his relatives were in safe hands, Hotak then turned around and came back so that he could protect his family home – and vlog to his thousands of Instagram followers about the evolving situation on the ground in Afghanistan.

He has also been keeping a very close eye on his crypto portfolio on Binance, as the local currency touches record lows and nationwide bank closures make it next to impossible to withdraw cash.

“In Afghanistan, we don’t have platforms like PayPal, Venmo, or Zelle, so I have to depend on other things,” said Hotak.

Afghanistan still mostly operates as a cash economy, so money in Hotak’s crypto wallet won’t help him put dinner on his table tonight, but it does give him peace of mind that some of his wealth is safeguarded against economic instability at home.

It also offers bigger promises down the road: Access to the global economy from inside Afghanistan, certain protections against spiraling inflation, and crucially, the opportunity to make a bet on himself and a future he didn’t think was possible before learning about bitcoin.

“I have very, very, very limited resources to do anything. I’m interested in the crypto world, because I have earned a lot, and I see a lot of potential in myself that I can go further,” he said.

Run on the banks

For many Afghans, this week has laid bare the worst-case scenario for a country running on legacy financial rails: A nationwide cash shortage, closed borders, a plunging currency, and rapidly rising prices of basic goods.

Many banks were forced to shutter their doors after running out of cash this week. Photos featuring hundreds of Kabul residents crowding outside branches in a futile effort to draw money from their accounts went viral.

“There’s no bank I can go to right now, no ATM,” said Ali Latifi, a journalist born and based in Kabul. “I live above two banks and three ATM machines, but they’ve been off since Thursday,” said Latifi, referring to the Thursday before the palace ouster.

Without an authority helming the Central Bank, it appears that printing cash to cover the shortfall isn’t an option, at least in the short-term.

The Western Union has suspended all services and even the centuries-old “hawala” system – which facilitates cross-border transactions via a sophisticated network of money exchangers and personal contacts – for now, remains closed.

Sangar Paykhar, a Kabul native currently living in the Netherlands, has been in constant touch with relatives there in recent weeks. He said that many who live paycheck to paycheck were, at first, borrowing money from others to get by, but now, those able to lend out cash have started conserving their funds.

“They’ve realized the regime has collapsed” and that those they are lending to “might not have a job tomorrow,” said Paykhar.

A few days before the Taliban entered Kabul, Musa Ramin was among the people who queued outside a bank in a fruitless attempt to withdraw cash. But unlike other Afghans in line with him that day, months earlier, he had invested a portion of his net worth into crypto. Ramin had been burned before by a rapidly depreciating currency, and decentralized digital money had proven to be a trusted safeguard.

In 2020, on what was meant to be a brief layover on a trip from London to Kabul, Ramin got stuck in Turkey. A one-week, mandatory Covid quarantine ballooned into six months.

“I converted all my money to the lira,” he said. After the Turkish currency began to spiral, Ramin said his capital was cut in half, and he was forced to conserve it. “That is when I discovered bitcoin.”

With all flights cancelled and no other options for departure, Ramin realized he needed to find alternative ways to support himself while stranded in Turkey during the pandemic-related shutdown. That’s when he started trading crypto.

“At first, I lost a lot of money,” he said. But he’s since gotten the swing of managing his digital assets, thanks to Twitter and tutorials on YouTube.

Even after returning to Kabul, the 27 year-old says he put all his focus into trading crypto. 80% of his crypto capital is in spot exposure, primarily in major coins, like bitcoin, ethereum, and binance coin. The other 20% he uses to trade futures.

“I was making more money in crypto in a month than in construction in a year,” said Ramin, though he did acknowledge the risk that’s involved. “It’s easy making money in crypto but keeping that wealth is the difficult part.”

Despite that volatility, Ramin still sees crypto as the safest place to park his cash. “If a government isn’t formed quickly, we might see a Venezuela-type situation here,” Ramin told CNBC. He feels virtual tokens are his safest hedge against political uncertainty and plans to increase his exposure to digital currencies in the coming year to as much as 40% of his total net worth.

Ramin isn’t alone in his thinking. Google trends data shows that web searches in Afghanistan for “bitcoin” and “crypto” rose sharply in July just before the coup in Kabul. That said, because this tool is a measure of interest, the spike could be referring to 10 searches or it could be 100,000.