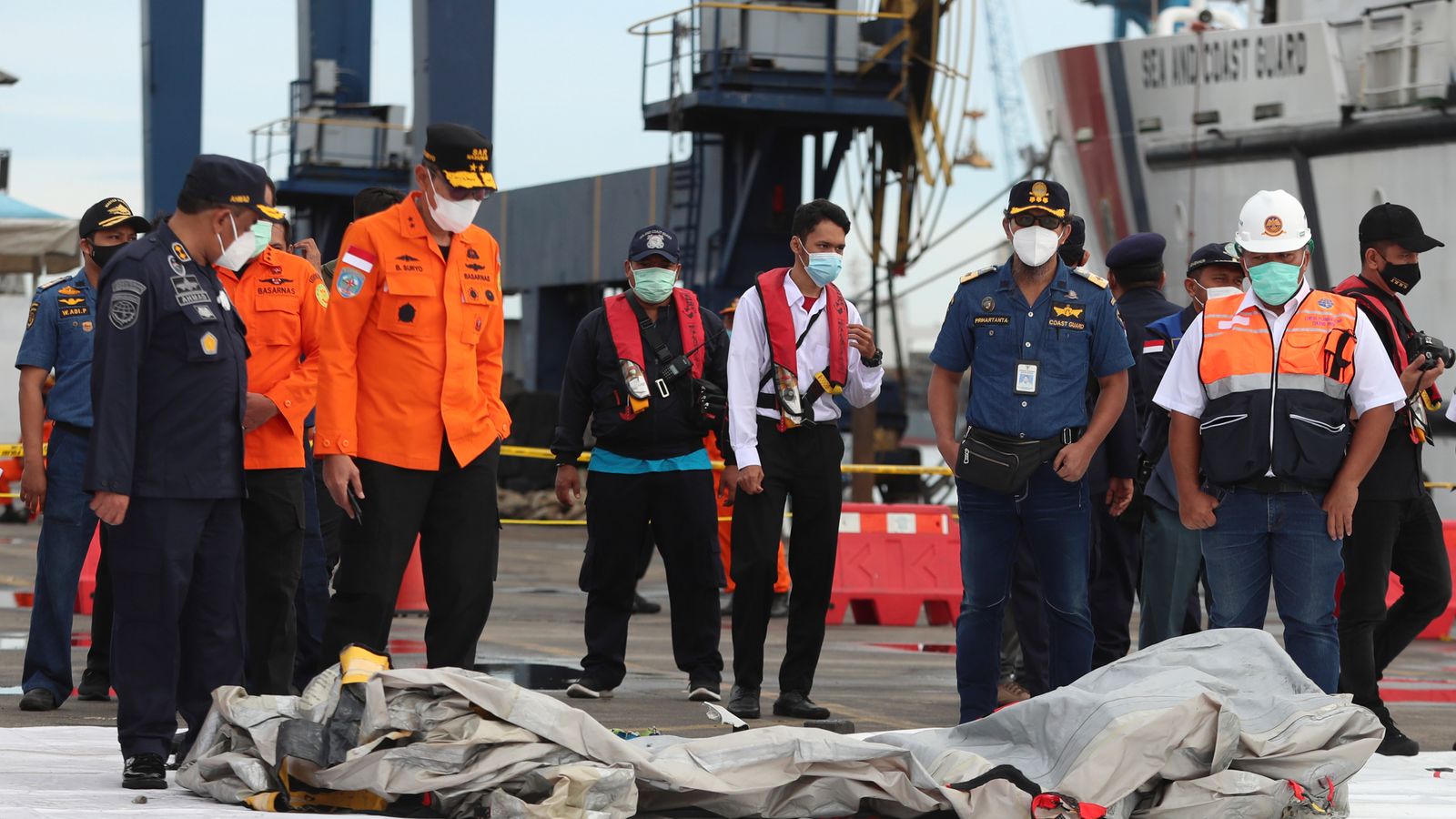 Divers find body parts and pieces of fuselage in the sea, near to where the passenger plane is thought to have crashed.

Divers in Indonesia have found body parts and wreckage of the Boeing 737-500 jet that crashed with 62 people on board.

He confirmed that human body parts, pieces of clothing and scraps of metal were found between Lancang Island and Laki Island on Sunday morning.

Air Chief Marshal Hadi Tjahjanto also said in a statement: "We received reports from the diver team that the visibility in the water is good and clear, allowing the discovery of some parts of the plane.

"We are sure that is the point where the plane crashed," he said, adding the objects found included broken pieces of fuselage with aircraft registration parts. 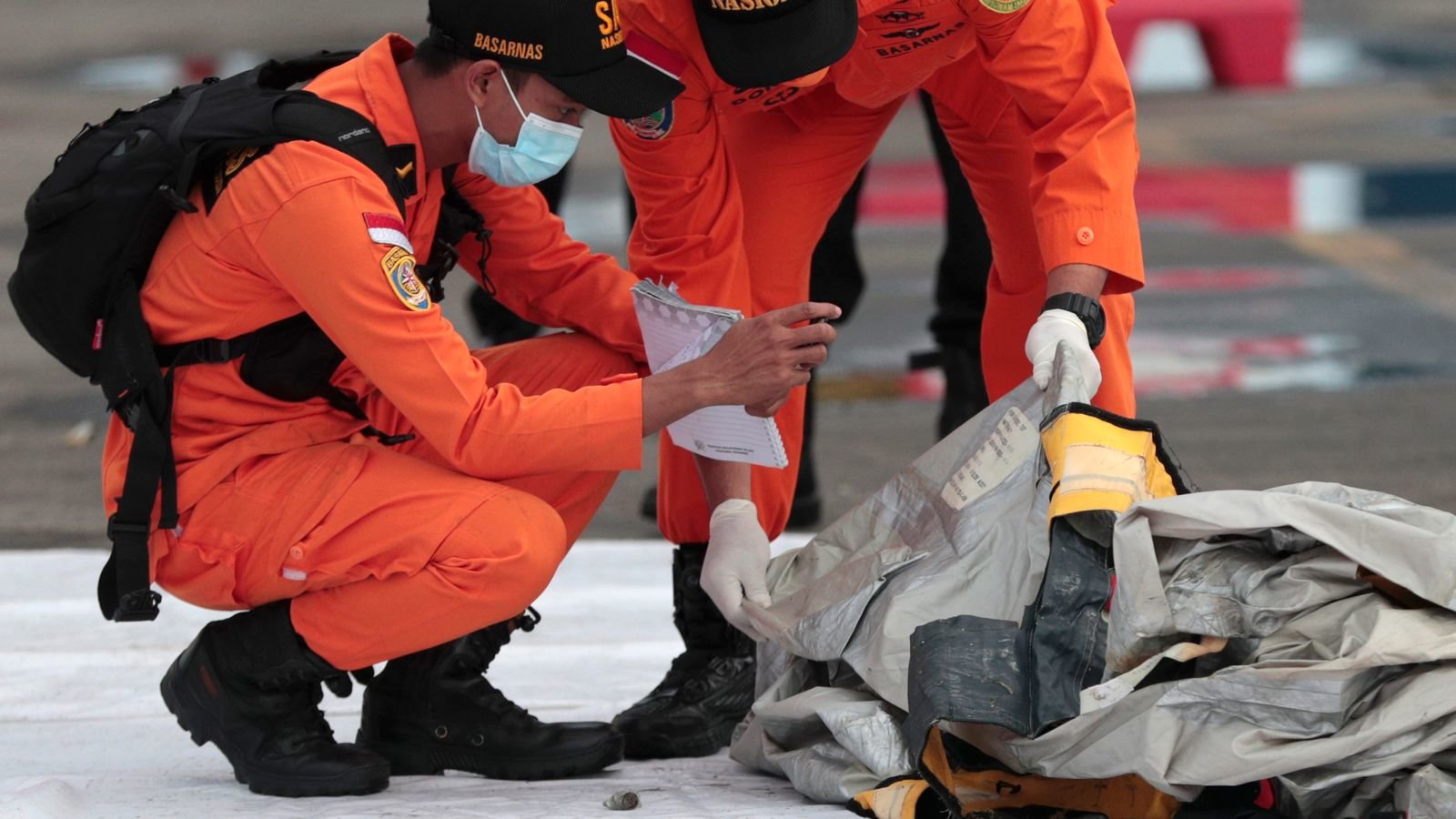 Pieces of wreckage were found between Lancang Island and Laki Island

Sriwijaya Air Flight 182 was flying from the capital Jakarta, to the island of Borneo, when it crashed around four minutes after take-off on Saturday. Last contact was made at 2.40pm local time (7.40am in the UK).

There has been no sign of survivors. Those on board included seven children and three babies.

"I represent the government and all Indonesians in expressing my deep condolences for this tragedy," he said. "We are doing our best to save the victims. We pray together so that the victims can be found."

Earlier, rescuers said they were investigating signals found "in two points" which could be the plane's black box.

The discovery came after teams on a navy ship picked up another signal from the plane which fitted with the coordinates from the last contact made by the pilots. Divers were then sent to search the area.

Little is known about the cause of the crash.

Tracking service Flightradar24 said on Twitter that the flight "lost more than 10,000ft (3,000m) of altitude in less than one minute" about four minutes after departure.

While fishermen in the area around Thousand Islands, a chain of islands north of Jakarta's coast, reported hearing an explosion around 2.30pm local time on Saturday. 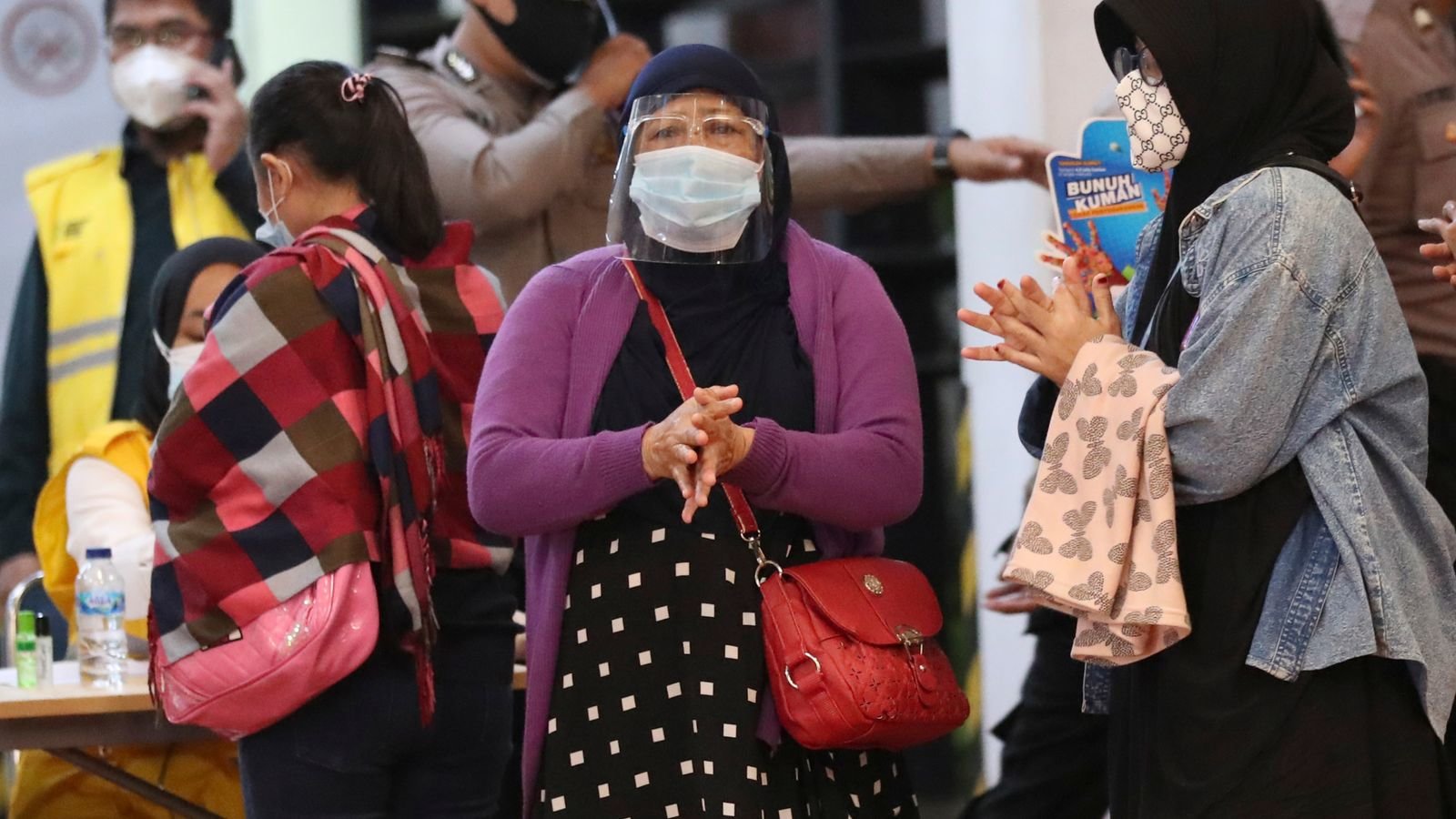 Relatives of passengers arrive at a crisis center

"We heard something explode, we thought it was a bomb or a tsunami since after that we saw the big splash from the water," fisherman Solihin, who goes by one name, told The Associated Press.

"It was raining heavily, and the weather was so bad. So, it is difficult to see around clearly.

"But we can see the splash and a big wave after the sounds. We were very shocked and directly saw the plane debris and the fuel around our boat." 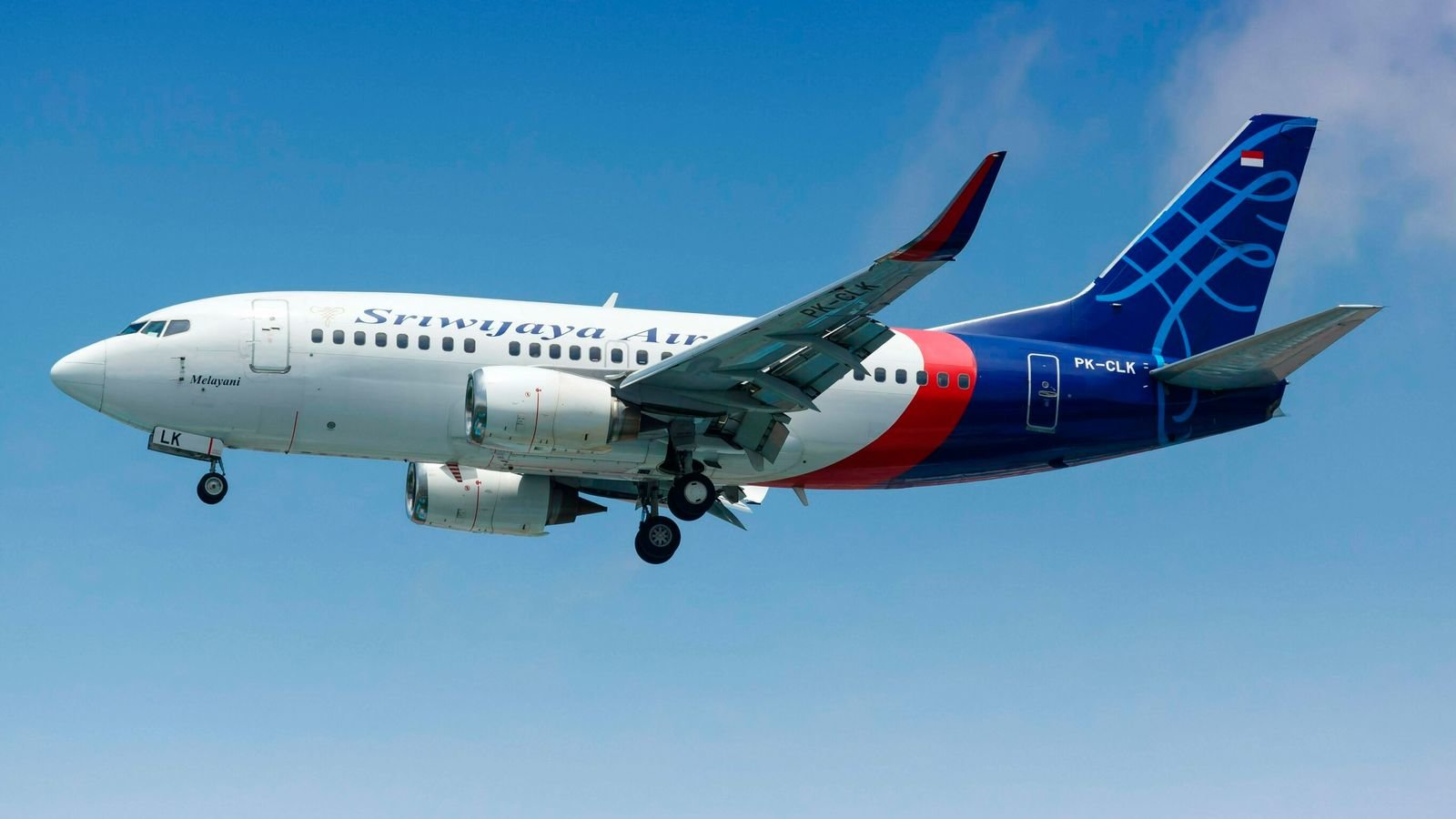 The missing plane is a Sriwijaya Air Boeing 737-500

Sriwijaya Air president Jefferson Irwin Jauwena said the plane, which was 26 years old and previously used by airlines in the United States, was airworthy.

He also revealed it had flown to Pontianak and Pangkal Pinang city on the same day without issue.

In October 2018, a Boeing 737 Max 8 jet operated by Lion Air plunged into the Java Sea just minutes after taking off from Jakarta, killing all 189 people on board.

It was the worst airline disaster in Indonesia since 1997, when 234 people were killed on a Garuda flight near Medan on Sumatra island.

The plane involved in Saturday's incident did not have the automated flight-control system that played a role in the Lion Air crash and another crash of a 737 Max 8 jet in Ethiopia five months later, leading to the grounding of the Max 8 for 20 months.

And in December 2014, an AirAsia flight from Surabaya to Singapore crashed into the sea, killing 162 people.