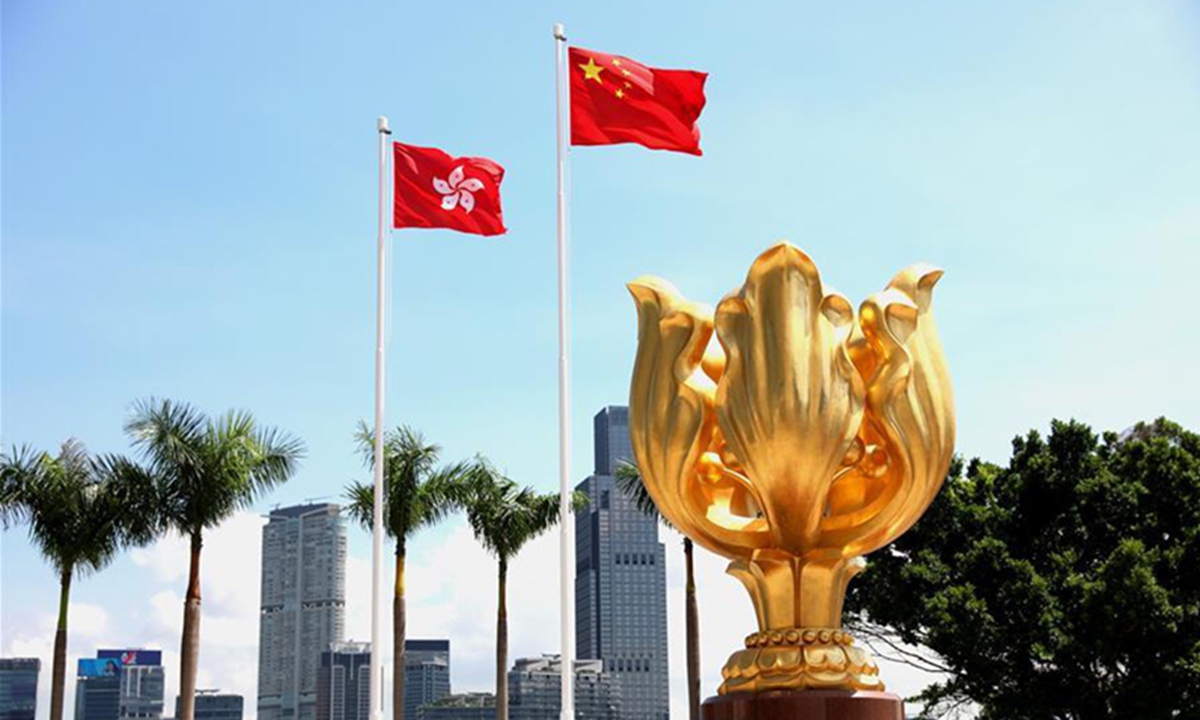 The government of the Hong Kong Special Administrative Region (SAR) on Monday released its first report on its business environment since the region returned to China in 1997.
With detailed data and solid arguments, the report strongly proves that, after the enactment and implementation of the National Security Law for Hong Kong, the business environment has become sounder and more stable in the region, its economic prosperity and development more secure, and investors around the world more confident.The situation in Hong Kong has changed from chaos to smooth governance, which is inspiring. This is the loudest response to the smear practices by the US and the West.

The anti-extradition bill protests once let the Pearl of the Orient go dim with dust, as the business environment was heavily undermined. The US has also repeatedly taken advantages of Hong Kong's difficulties to intervene and impose sanctions on it. Washington has colluded with pro-secession forces in Hong Kong and made attempts to disrupt order in an attempt to make a profit from the troubled situation and realize their political purpose. Anyone with a conscience knows that when rioters bluntly engaged in violent activities, public transportation was interrupted and basic social order was hard to maintain, let alone the business environment.

Fortunately, a powerful motherland stands behind Hong Kong, which will never permit that these vicious forces ruin the region. The central government took decisive measures to firmly support the SAR government to clear up the chaos. This is exactly what people and businesses in Hong Kong are eagerly looking forward to. The implementation of the National Security Law and the improvement of the electoral system are fundamental measures that provide a strong guarantee for the recovery and improvement of Hong Kong's normal social life and business environment.

Only when Hong Kong is aligned to governance and prosperity can it have an impressive business environment. The amount of IPO funds raised in Hong Kong over the past year has exceeded HK$500 billion ($64.2 billion), representing an increase of more than 50 percent over the previous 12 months. By the end of June in 2021, total deposits in the banking system amounted to over $15 trillion, up by almost 8 percent over last June. Hong Kong's GDP expanded by 7.9 percent in the first three months of 2021, the biggest jump in quarterly growth in 11 years. According to a survey by the Hong Kong General Chamber of Commerce, 61 percent of respondents believe that the National Security Law will either have a positive impact or no impact at all on their business over the long-term. Furthermore, Hong Kong ranked third globally in the Global Financial Centers Index 30 Report published on Friday.

Indeed, the hopes of the anti-China activists and separatists and their foreign masters fell. Hong Kong is an international financial center with a free, open, effective and law-based business environment. These are the city's competitive advantages which many Americans are very reluctant to see. They aim to deprive Hong Kong of such advantages. For that reason, they always try every means to curse or even destroy the normal business environment, attempting to drag Hong Kong back into the "political mire."

On May 29, 2020, former US president Donald Trump announced the revocation of the special status and preferential economic treatment for Hong Kong. US Secretary of State, Antony Blinken, on March 31 reaffirmed that Hong Kong is no longer autonomous and remains undeserving of special treatment by the US. On July 16, the US departments of State, Treasury, Commerce and Homeland Security fabricated a Hong Kong business warning to intimidate American companies and individuals in the region. Then, in August, the US Consulate General in Hong Kong and Macau summoned US companies in Hong Kong for a meeting, where they advised businesses to leave the city with the excuse that risks grow bigger for them. Their sinister intentions were laid bare.

It should be noticed that the US plot against Hong Kong is bound to suffer a major setback. The business environment report of Hong Kong reflects that the vast majority of businesses in the SAR, including American ones, do not want to dance to Washington's political tune. With professional and pragmatic judgment, the companies keep optimistic about Hong Kong on the basis of their own interests. Public data shows that none of the more than 4,000 transnational corporations operating in Hong Kong has left the city since the implementation of the National Security Law for Hong Kong.

Hong Kong is embracing a new historical opportunity. The 14th Five-Year Plan (2021-25) has given the Hong Kong SAR a new function, a new position, and new advantages. The development of the Guangdong-Hong Kong-Macao Greater Bay Area and the reform plans in Hengqin and Qianhai will unleash Hong Kong's huge development potential. Hong Kong's future must be better.
#Donald Trump
Add Comment