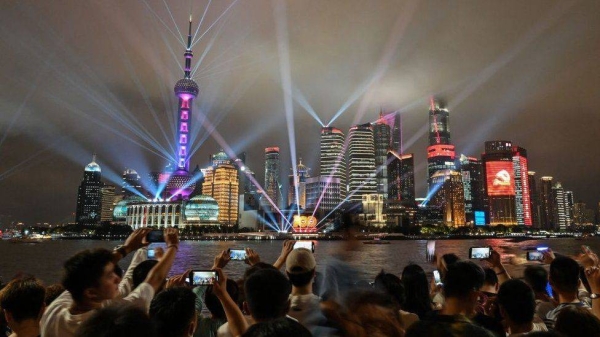 An iconic skyline in the Chinese city of Shanghai — called The Bund — will not be lit for two nights to save power, officials say.
The waterfront area — known for its mix of historical and futuristic buildings — is a popular tourist destination.

Elsewhere in China, major manufacturers in the Sichuan province told the BBC they had been hit by power cuts.

Large parts of the world's second largest economy face a severe drought amid a record-breaking heatwave.

In a notice on Sunday, the Shanghai Landscaping and City Appearance Administrative Bureau said buildings in the Bund, which are located along the city's largest river, will not be lit on Monday and Tuesday.

"We apologize for any inconvenience this may cause," it said in the notice.

China issued its first national drought alert of the year last week, after areas including Shanghai in the Yangtze Delta region and Sichuan in southwest China experienced weeks of extreme heat.

The 'yellow alert' is the third most severe level on the official scale.

Officials in the Sichuan province, where temperatures have exceeded 40C (104F), said in a recent statement that rising temperatures and low rainfall, along with increased demand for air conditioning, had caused the power shortages.

The province has extended its power saving measures by five days to Thursday, according to media reports. These limit the power supply to some industrial businesses.

German carmaker Volkswagen told the BBC that its factory in Chengdu - which is the capital of Sichuan - remains shut.

A Volkswagen spokesperson said the firm expects "a slight delay" in deliveries that it could recover "in the near future".

"We are monitoring the situation and are in close exchange with our suppliers," the spokesperson added.

Apple supplier Foxconn, which also shut its plant in Sichuan, said the impact on its production was currently "not significant".

The impact of power cuts are likely to be short-lived, Chenyu Wu, an associate analyst for China and North Asia at consultancy Control Risks, told the BBC.

"Local efforts to save power and boost generation are likely to help mitigate the power shortage situation in the coming weeks, especially if the much-hoped for end to the scorching heat wave arrives," he said.

Authorities have moved to induce rainfall in parts of central and southwest China amid a heatwave, which is the longest on record for the country.

Provinces around the drought-stricken Yangtze River - Asia's longest waterway - have turned to cloud seeding operations to combat the lack of rain, while Hubei and a number of other provinces have launched rockets carrying chemicals into the sky, according to local media.

But a lack of cloud cover has stalled efforts in some areas seeking to do the same.
Add Comment