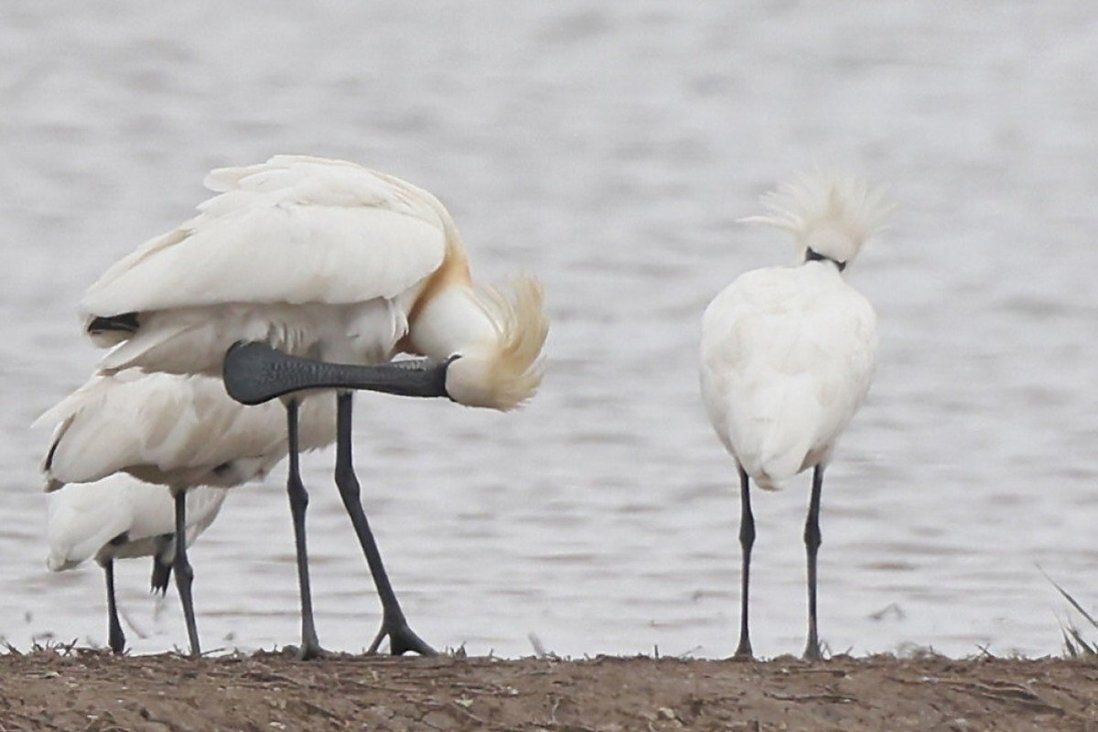 Global population of black-faced spoonbills reaches all-time high of more than 6,000 for the first time.

One of Hong Kong’s most iconic migratory birds could be removed from a list of endangered animals in two years, following decades-long conservation efforts, an environmentalist group has said.

The global population of the black-faced spoonbill has reached an all-time high of more than 6,000 birds for the first time, growing from the fewer than 1,000 recorded 20 years ago.

In an international survey conducted between January 7 and 9, conservationists and ornithologists catalogued about 6,162 birds across East Asia, including Japan, South Korea and Malaysia.

The species of migratory waterbird, currently classified as endangered, plays an important role in Hong Kong’s conservation efforts, serving as an indicator of the healthiness of local wetlands.

The waterbird is also a mascot of the World Wide Fund for Nature Hong Kong, which restores and manages the internationally significant Mai Po nature reserve.

According to the wildlife survey, 3,824 birds had selected the island as their wintering ground, a 22 per cent increase from last year and accounting for nearly two-thirds of the species’ population.

“Its extinction crisis is decreasing year by year,” said Yu Yat-tung, the HKBWS director, on Friday. “It was really down to the increase in Taiwan.”

Over the past eight years, about 370 animals have chosen Hong Kong as their winter habitat, with 369 birds reportedly staying in Deep Bay in the New Territories this year, a 10 per cent rise from 2021.

The mosaic of mangrove forests, wetlands and fish ponds around the Mai Po nature reserve had created an “ideal” habitat for the birds to forage, Yu said.

Yu added the government’s move to establish wetland parks as part of its Northern Metropolis plan might have a “proactive” effect on the city’s conservation efforts, but he warned that authorities must ensure conservation areas were extensive enough to reduce human disturbance.

Under the Northern Metropolis blueprint, authorities have suggested recovering about 700 hectares (1,730 acres) of privately owned wetlands and fish ponds near the border to set up three new wetland parks that cover a total area of 2,000 hectares (4942 acres).

But Yu added that Macau saw a 51 per cent decrease in the birds from 45 to 22 this winter, saying the city’s flourishing casino and hotel industry could be the cause.

Discussions about removing the animal from the endangered species list first started in 2019 by the International Union for Conservation of Nature (IUCN), a statutory entity under the United Nations, Yu noted, adding the entire process could take a total of five years to complete.

He said he believed the process at its current stage could reach a conclusion in as little as two years, adding that he had continued to call for more long-term measures in protecting wetlands.

It was currently unclear, he said, whether the black-faced spoonbill would be downgraded from “endangered” to “vulnerable” or “near-threatened,” terms which would mean it faced a lower risk of extinction.