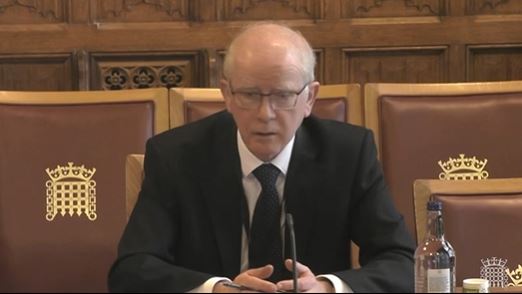 'I wasn't dragged out of Hong Kong', says British judge

Former non-permanent judge of the Hong Kong Court of Final Appeal Robert Reed said in a UK Parliament meeting Wednesday that he didn't resign due to political pressure.
“I was not under pressure from politicians. That's a mistaken reading. There were some things published in Hong Kong which may have encouraged that misunderstanding,” said Reed, who is also the president of the UK Supreme Court.

“The discussions I had with ministers arrived at a consensus and I wasn't being dragged out of Hong Kong … I felt the time had come when we had to call it a day in the interest of the values that we represent,” he also said.

Reed and Hodge – another non-permanent judge for Hong Kong's highest court – announced their resignation on March 30.

They said in a statement that they “cannot continue to sit in Hong Kong without appearing to endorse an administration which has departed from values of political freedom, and freedom of expression.”

Their resignations soon drew fire from the government as well as pro-establishment politicians. Chief Executive Carrie Lam Yuet-ngor expressed regret but said the city “must vehemently refute any unfounded allegations” that their resignations have anything to do with the national security law.

Financial Times wrote that the arrangement allowing British judges to sit at Hong Kong's highest court was “a vestige of British colonialism and supported by the government for as long as it deemed it in the UK’s national interest”.

“The idea was to uphold rights granted under Hong Kong’s mini-constitution known as the Basic Law, and to promote British soft power in the region. The UK’s decision to withdraw support for the scheme suggests both ideas are now, sadly, relics,” the newspaper wrote.

“No one in Hong Kong could possibly have agreed to that. Judges are respectable and would never tolerate being manipulated in any such 'scheme',” she wrote.

As for the letter to Wall Street Journal, Cheng stressed that the city's rule of law remains strong and “there has never been any pressure, let alone from the Central Authorities, on our judiciary.”

“The decline of Hong Kong’s rule of law continues under Chinese Communist Party pressure, and this week two prominent British judges resigned from the city’s top court in protest,” the journal wrote in an opinion dated April 2.

Cheng hit back at the “bold statement” and insisted that Hong Kong's judges “remain free to decide cases independently and impartially based only on law and evidence.”
Add Comment