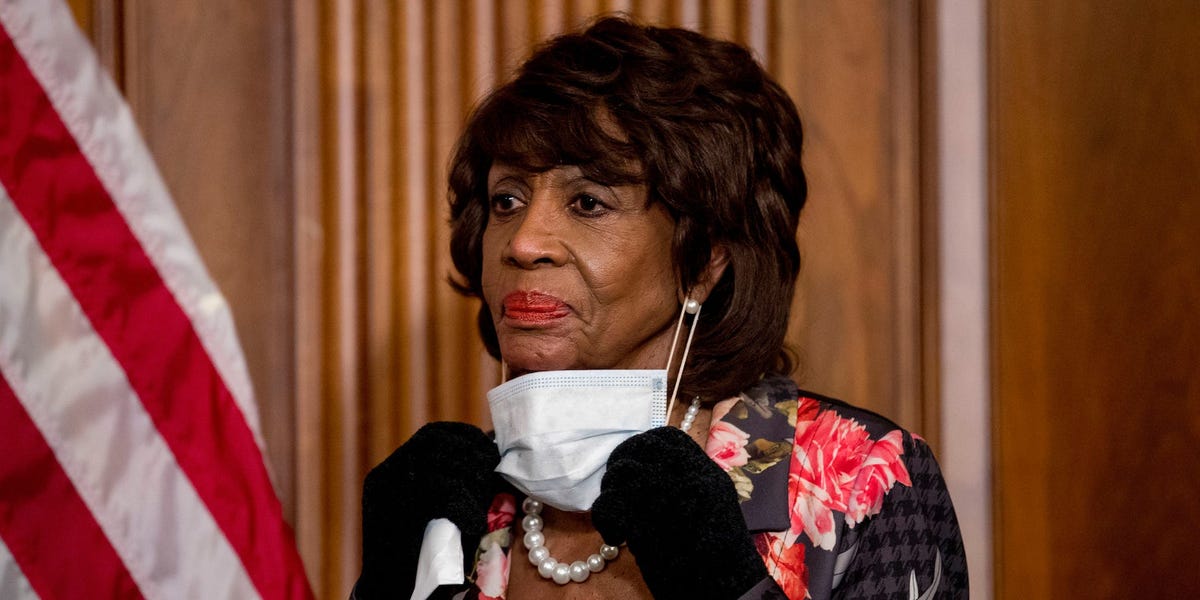 "Someone said it better than me: I'm not celebrating. I'm relieved," Rep. Maxine Waters of California said on Tuesday. 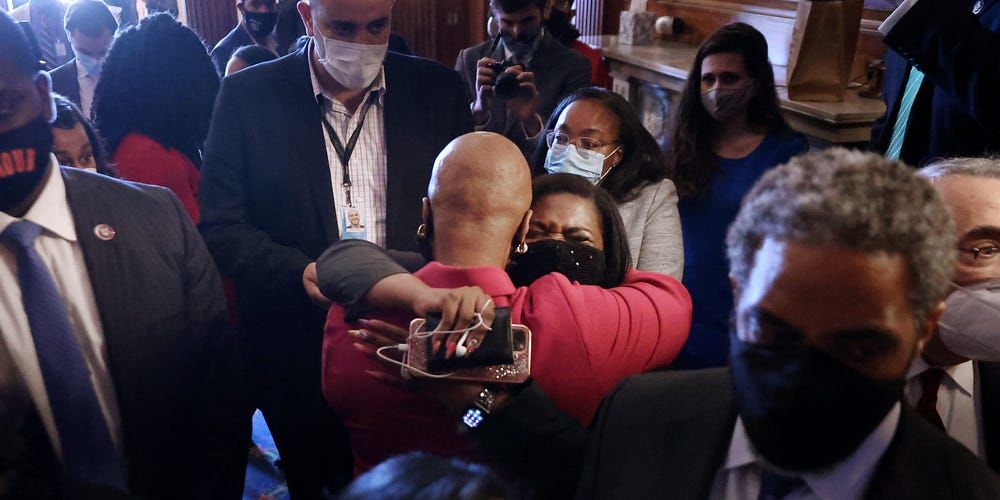 WASHINGTON, DC - APRIL 20: Rep. Cori Bush (D-MO) embraces Rep. Ayanna Pressley (D-MA) as members of the Congressional Black Caucus react to the verdict in the Derick Chauvin murder trial in the Rayburn Room at the U.S. Capitol on April 20, 2021 in Washington, DC. Chauvin was found guilty on all three charges in the murder of George Floyd.

Democratic lawmakers expressed their relief on Tuesday after a jury found Minneapolis police officer Derek Chauvin guilty in the death of George Floyd.

"Someone said it better than me: I'm not celebrating. I'm relieved," Rep. Maxine Waters of California said.

Reactions to the closely-watched case poured in shortly after the verdict's announcement, which found Chauvin guilty of second- and third-degree murder, and second-degree manslaughter. 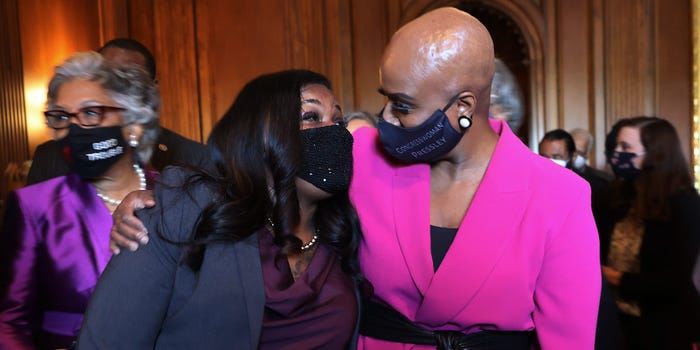 WASHINGTON, DC - APRIL 20: Rep. Cori Bush (D-MO) (C) and Rep. Ayanna Pressley (D-MA) walk with their arms around each other as members of the Congressional Black Caucus walk to a news conference following the verdict in the Derick Chauvin murder trial in the Rayburn Room at the U.S. Capitol on April 20, 2021 in Washington, DC. Chauvin was found guilty on all three charges in the murder of George Floyd.

"This feels different for our community, justice feels new and long overdue," Rep. Ilhan Omar of Minnesota said in a tweet.

Many high-profile Democrats also used the moment to highlight the ongoing issue of systemic racism in law enforcement, and the need for a congressional response.

"America was forever changed by the video of Derek Chauvin killing George Floyd," Senate Majority Leader Chuck Schumer said, referring to the footage of Chauvin, a white police officer who knelt for over nine minutes on the neck of Floyd, a Black man, while he was handcuffed and lying facedown on the ground. The video from last May ignited a wave of anti-racism and police brutality protests across the country and the world over the summer.

"Today just marks the beginning," Rep. Karen Bass of California said during a press conference with members of the Congressional Black Caucus. Bass is the lead sponsor of the George Floyd Justice in Policing Act, a bill aimed at strengthening law enforcement accountability.

Rep. Pramila Jayapal of Washington echoed the stance, tweeting: "We must put an end to police brutality, racism, and white supremacy. We can't just say Black lives matter—we must fight for Black lives."

Independent Sen. Bernie Sanders of Vermont tweeted that the verdict "delivers accountability" but "not justice for George Floyd."

"Real justice for him and too many others can only happen when we build a nation that fundamentally respects the human dignity of every person," he said.

For his part, Rep. Jamaal Bowman of New York brought attention to other lives lost at the hands of law enforcement, including Daunte Wright, Adam Toledo, Tamir Rice, and Breonna Taylor, and underscored the need for justice.

"This verdict doesn't change that racism, or the work ahead needed to transform those systems to serve us," he wrote on Twitter.