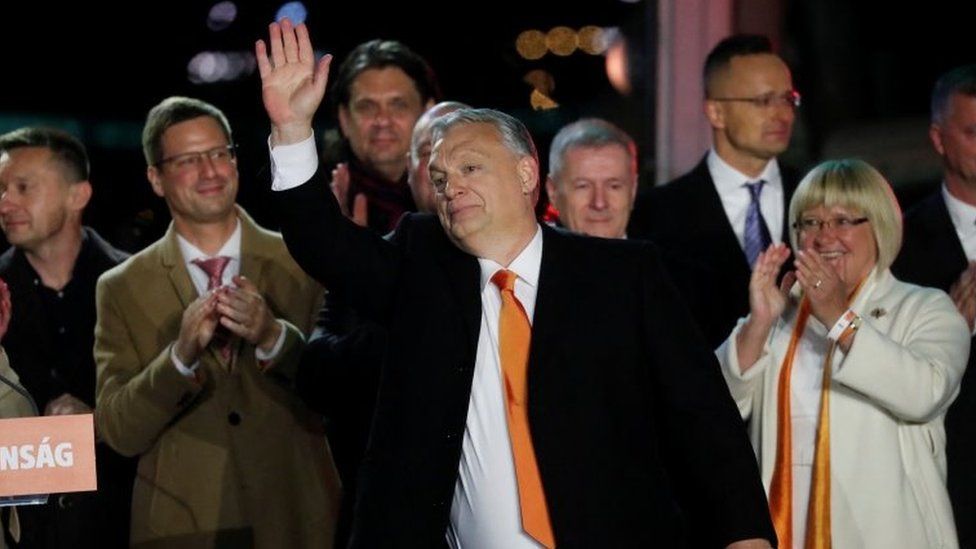 Hungary's nationalist Prime Minister Viktor Orban has declared victory in general elections after partial results gave his Fidesz party a big lead - and called Ukraine's President Zelensky an "opponent" in his victory speech.
With 94% of votes counted, the right-wing Fidesz had 53%.

An opposition alliance led by Peter Marki-Zay was far behind with 35%.

"This was a huge victory," Mr Orban told supporters in the capital Budapest.

"They can see it from the Moon, but certainly from Brussels as well."

The president added: "We never had so many opponents," citing "Brussels bureaucrats... the international mainstream media, and finally the Ukrainian president".

Hungary shares a border with Ukraine and has taken in more than half a million refugees so far. Mr Orban insists that by helping the people, but refusing to supply weapons to Ukraine, he is keeping Hungary out of the war.

When confirmed, the victory will be Fidesz's fourth successive win since 2010.

Mr Orban, 58, has had a fraught relationship with the EU, which considers that Fidesz has undermined Hungary's democratic institutions, the BBC's Nick Thorpe in Budapest reports.

In his 12 years in power Mr Orban has rewritten the constitution, filled the top courts with his appointees, and changed the electoral system to his advantage.

During campaigning, the opposition's catch-phrase was "Orban or Europe".

Their candidate Peter Marki-Zay argued that Hungary should join Poland, the UK and others in supplying arms to Ukraine. And if called upon, and only within a Nato framework, should even consider sending troops.

The opposition complained that Fidesz had isolated Hungary from the European mainstream, and from consensual democracy, fairness and decency.

More than 200 international observers monitored the election in Hungary, along with thousands of volunteers from across the political spectrum.