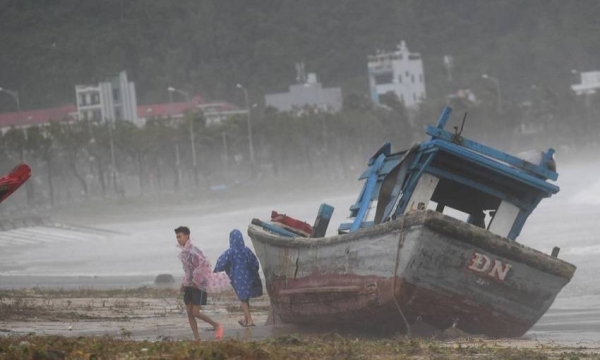 Typhoon Noru made landfall near Vietnam’s popular beach resort city of Da Nang on Wednesday morning, bringing powerful winds and heavy rain as hundreds of thousands of people were evacuated.
Noru hit Vietnam at 5 a.m. Wednesday local time, according to CNN Weather, less than 36 hours after it left a trail of destruction in the Philippines – where it was known as Karding.

The typhoon weakened a little prior to making landfall, but was still equivalent to a high-end Category 2 hurricane with winds near 175 kph, or about 109 mph.

Winds eased and the storm weakened to the equivalent of a Category 1 hurricane just before noon, according to the Joint Typhoon Warning Center. But the province of Quang Nam, home to the historic city of Hoi An and beach resort hotspot of Da Nang suffered from floods.

More than 100,000 households with 400,000 people have been evacuated as of Tuesday, according to Viet Nam News, the English newspaper run by state-run Vietnam News Agency. About 11,000 foreign tourists and 7,000 domestic visitors are staying in the city.

Pham Nguyen Duc Anh, 24, an English teacher at Teach For Viet Nam based in the Que Son district of Quang Nam province, along with his flat mate decided to stay at their neighbor’s house on Tuesday night because they feared the home would be vulnerable under the strong winds.

When they returned to their home late Wednesday morning when the storm began to subside, they found that their roof had been partially destroyed and that water had leaked into their house, but things were not as bad as they had initially feared.

“It was my first time here, living in the area [that is] very vulnerable to climate disasters,” he said.

Before Noru’s arrival, Vietnamese authorities had banned vessels from the sea and asked students to stay at home.

It will continue to bring strong winds and surges along the coast near Da Nang and is expected to weaken as it pushes inland over Southeast Asia. Central Vietnam, southern Laos, and northern Thailand face a risk of floods over the next 48 hours.

Local authorities were asked on Tuesday to cancel unnecessary meetings to concentrate on storm prevention and control, according to Viet Nam News.

Thua Thien Hue province, home to more than 2,000 fishing ships and around 11,000 fishermen, also banned vessels from going out to sea on Sunday amid warnings the storm will bring strong winds, high waves and flooding, Viet Nam News reported.

Vietnam’s Prime Minister Pham Minh Chinh chaired an urgent meeting with officials on Tuesday from at least eight provinces expected to be affected by the storm to discuss response efforts, Vietnam News

“Ministries, branches and localities, especially the heads of such units, must further enhance their responsibilities to ensure the safety, life and property of the people and the state in the context of the weather. Climate change is becoming increasingly extreme and unusual, causing very serious consequences,” the prime minister said, according to Viet Nam News.

Typhoon Noru left the Philippines around 8 p.m. on Monday, according to a bulletin from the Philippine Atmospheric, Geophysical, and Astronomical Services Administration (PAGASA), after barreling through with high winds and heavy rains that flooded Luzon – the country’s largest and most populated island.