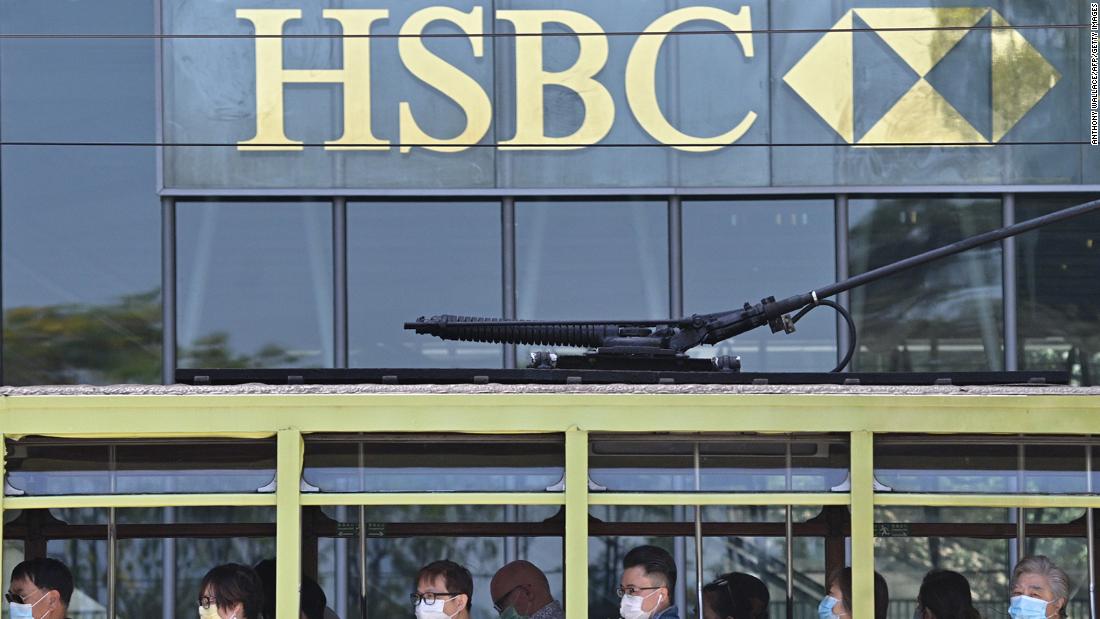 HSBC's shares plunged to historic lows on Monday as the bank was hit by new fears about its business in China and a report accusing it and other major lenders of failing to stop criminals from moving dirty money around the world.

The stock closed down more than 5% in Hong Kong at its lowest level since 1995, according to data provider Refinitiv. The pain continued in London, where the bank's shares were last trading down 6% at another multi-decade low.

This has already been a terrible year for HSBC's shareholders as the bank grapples with a global recession, plunging profits, US-China tensions and a political firestorm in Hong Kong.

But the bank was slapped with even more bad news this weekend, with Chinese state media suggesting that it could be included on a list of companies which could face restrictions on doing business in China.

"It isn't good," said Stephen Innes, chief global market strategist at AxiCorp. "Fear of the unknown is what triggers investors to cut and run."

HSBC's woes in China have been well documented. The London-based lender traces its roots to Hong Kong and has carved out a lucrative role in global banking for decades by straddling East and West. Asia delivered more than 80% of HSBC's profits last year.

But tensions between Beijing and the West have made HSBC a popular punching bag in Chinese state media, and the bank has long been floated as a potential candidate for a list of "unreliable" entities that Beijing could sanction.

On Saturday, investors were given another reason to worry about China when the country's Commerce Ministry laid out for the first time how that long-rumored list would work.

Any business placed on the so-called "unreliable entity list" could be restricted from investing in China, participating in Chinese imports or exports, or having its staff enter the country, the ministry said in a statement.

The ministry did not say which companies are on that list. But HSBC's possible inclusion was once again mentioned this weekend by the Chinese state-run tabloid Global Times, which also cited several American companies as possible targets.

And in July, the bank denied longstanding accusations from Chinese state media that it "framed" Huawei to help the US government. (The Chinese tech firm is in a tense legal battle with the United States, and a Canadian court is considering whether to extradite Huawei's CFO to stand trial in the United States.)

Further action from China may not be imminent, though. The Global Times also said that "there was no timetable or specific companies earmarked for the list," citing an official at China's Commerce Ministry. Instead, the message was meant to show that "China is sending a stern warning," according to the publication.

Innes said the move reminded investors of the bank's vulnerabilities. "If they can't do business in China, it's going to be a tremendous hit to both top and bottom lines," he told CNN Business.

Adding to HSBC's problems, BuzzFeed reported on Sunday that some of the world's biggest banks, including HSBC, "continued to move money for suspected criminals" despite documented concerns about certain transactions.

The publication said it had investigated more than 2,100 suspicious activity reports (SARs) compiled by the US Treasury Department's Financial Crimes Enforcement Network, which is known as "Fincen," to support its claims.

BuzzFeed said it shared the documents with the International Consortium of Investigative Journalists, an organization that has published other investigations involving suspicious financial activity, such as the Panama Papers and the Paradise Papers. CNN Business has not independently verified any of the Fincen documents.

In a statement Monday, HSBC said that it would "not comment on suspicious activity reporting."

It defended its efforts to "combat financial crime," saying that it had worked with a third-party monitor to overhaul its practices starting in 2012. It added that the bank is a "much safer institution" than it was back then.

In December 2012, HSBC agreed with US regulators to pay $1.9 billion to resolve money-laundering allegations. The Department of Justice and US Treasury said then that HSBC had allowed the most notorious international drug cartels to launder billions of dollars across borders.
Add Comment