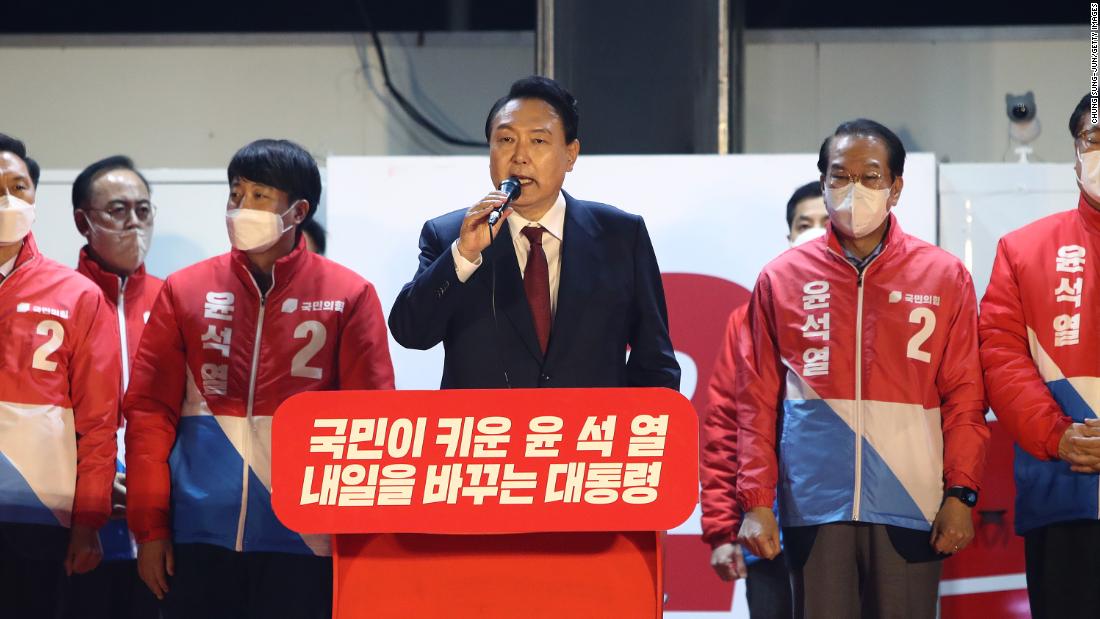 How South Korea's new president could shake up the region

South Korea's new president is taking power at a turbulent time for the country and the path he carves could shake up the region.

Conservative Yoon Suk Yeol of the People Power Party secured the election by a razor-thin margin Wednesday, pulling ahead of rival Lee Jae-myung by less than one percentage point.

Yoon is a newcomer to politics, having spent the last 27 years of his career as a prosecutor -- but he will face an array of challenges when he replaces liberal incumbent President Moon Jae-in in the Blue House on May 10.

Threats from North Korea are high on the agenda -- as well as rising tensions between South Korea's partners, the US and China. Yoon will have his hands full with domestic issues as well, with a growing "gender war" and surging Covid-19 cases.

Here's what a Yoon presidency could mean for South Korea.

Much of Yoon's campaign focused on his tough stance on North Korea -- a departure from Moon's current approach, which has consistently promoted dialogue and peaceful reconciliation.

Inter-Korean relations have been a key electoral issue, with tensions running high amid a recent surge in North Korean missile testing. The country has launched nine missile tests in 2022 alone, including a new type of "hypersonic missile" able to maneuver at high speed -- prompting condemnation from the South.

Talks between the two Koreas have stalled since a planned US-North Korea summit fell apart in 2019, said Cheong Seong-chang, director of the Center for North Korean Studies at the Sejong Institute, ahead of the election. "It's unlikely to expect any progress in denuclearization negotiations unless the next government comes up with a sophisticated denuclearization solution that is acceptable to both the US and North Korea," he added.

Yoon's main rival in the election, Lee, from the Democratic Party, had supported the kind of reciprocal, trust-based engagement sought by Moon. Yoon, by contrast, has promised to build up South Korea's military, even hinting that he would launch a pre-emptive strike if he saw signs of an offensive launch against Seoul.

Throughout his campaign, Yoon has slammed the Democratic Party's "subservient North Korea policy," vowing not to ease sanctions or prepare a peace treaty until the North "makes active efforts in complete and verifiable denuclearization."

Speaking in Seoul on January 24, Yoon added that the door to diplomacy and dialogue will "always be left open" -- but that he would pursue a peace that is "based on strong national defense posture, not of submission."

"We will build a powerful military force that can assuredly deter any provocation to protect the safety and property of our citizens and safeguard the territorial integrity and sovereignty of our nation," Yoon said.

But experts warn this harder line could see relations worsen between the two countries. Some fear military tensions could return to the crisis levels seen in 2017, when North Korea's aggressive weapons testing and advancement prompted US-South Korea shows of military force, as well as a threat from then-US President Donald Trump to unleash "fire and fury like the world has never seen."

Cheong, from the Sejong Institute, said it seemed clear that Yoon's election would cause inter-Korean relations to "return to the hostile relationship of the Cold War era."

For years, the country has walked a tightrope of a close security alliance with the US, and a growing economic relationship with China -- but "the time and period for that kind of tradition is ending," said Kim Jiyoon, research fellow at Sogang University's Institute of Social Sciences.

While Lee suggested he would try to balance both partnerships, Yoon has made clear which he will prioritize.

"South Korea and the United States share an alliance forged in blood as we have fought together to protect freedom against the tyranny of communism," Yoon said in January, adding that the country must "rebuild this alliance."

As part of this push, Yoon has suggested he would seek the installment of a second anti-ballistic missile system -- which would undoubtedly provoke fury from China.

South Korea first announced in 2016 it would deploy the US-built Terminal High Altitude Area Defense (THAAD) defense system to defend against North Korean missile threats. That sparked a year-long diplomatic feud with China, which argued the missile system would jeopardize its own national security.

It also saw public sentiment sour between the two, with some Chinese citizens calling for boycotts of South Korean goods, and even destroying popular products such as makeup in performative protests.

Under the new administration,"it is inevitable that South Korea-China relations will deteriorate again, further narrowing South Korea's diplomatic position and taking a certain blow to the Korean economy," Cheong said.

Yoon has also pointed to the technological advantages of a closer alliance with the US, arguing it could help South Korea maintain its edge against "competitive nations including China."

At a summit last year between Moon and US President Joe Biden, both leaders reaffirmed their military alliance and agreed to expand cooperation in the areas of technology, the economy, the environment and public health. A joint statement afterward praised the US-South Korea relationship as "the linchpin for stability and prosperity."

Yoon's position reflects public sentiment in the South, which is currently "hawkish and very hardline," said Kim from Sogang University. This is probably "the highest antagonism for China shared by the Korean public -- which means a very strong and friendly feeling toward the United States," she added.

That feeling appears to be reciprocated. Biden and Yoon had a call on Thursday, with the US President inviting Yoon to visit the White House. Biden added that he hoped for deeper bilateral relations with South Korea and that "close coordination ... regarding North Korean policy will be important."

Yoon faces plenty of challenges at home, too, including the Covid-19 pandemic, corruption, polarized politics -- and gender equality, another key issue that has defined this election.

South Korea's gender war intensified in the run-up to the election, with young voters increasingly split along gender lines.

Facing a hypercompetitive job market and skyrocketing housing prices, so-called "anti-feminists" claimed the country's bid to address gender inequality had tipped too far in women's favor. Feminists, meanwhile, pointed to the country's widespread sexual violence, entrenched gender expectations, and low female representation in boardrooms and in politics as examples of how discrimination against women is still rife. 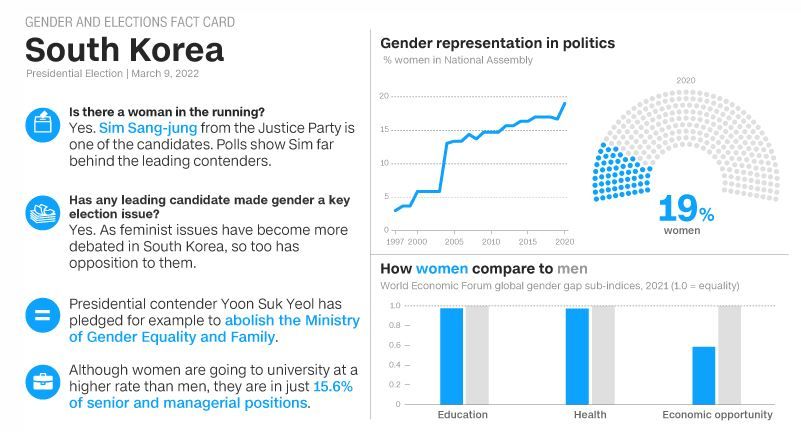 Both leading presidential candidates leaned into the issue, with Lee voicing support for women's rights while Yoon actively courted votes among anti-feminists. One of Yoon's major campaign promises was to abolish the Ministry of Gender Equality and Family -- claiming it is unfair to men. He also promised to raise the penalty for falsely reporting sex crimes.

CNN approached Yoon's office for comment on his gender policies but did not receive a response.

Anti-feminists have made themselves a powerful voting bloc in South Korea. Last April, Moon's Democratic Party lost mayoral elections in both Seoul and its second largest city Busan, with exit polls showing young men in their 20s had overwhelmingly shifted their vote to Yoon's People Power Party.

As the election approached, some worried that if Yoon won, gender divisions could widen even further, and the women's rights movement could be set back.

"The gender gap is the widest among the young generation," Kim said. "If you go up to the older generation, it's actually converging, but it's the widest and the most divergent between young females and young males."