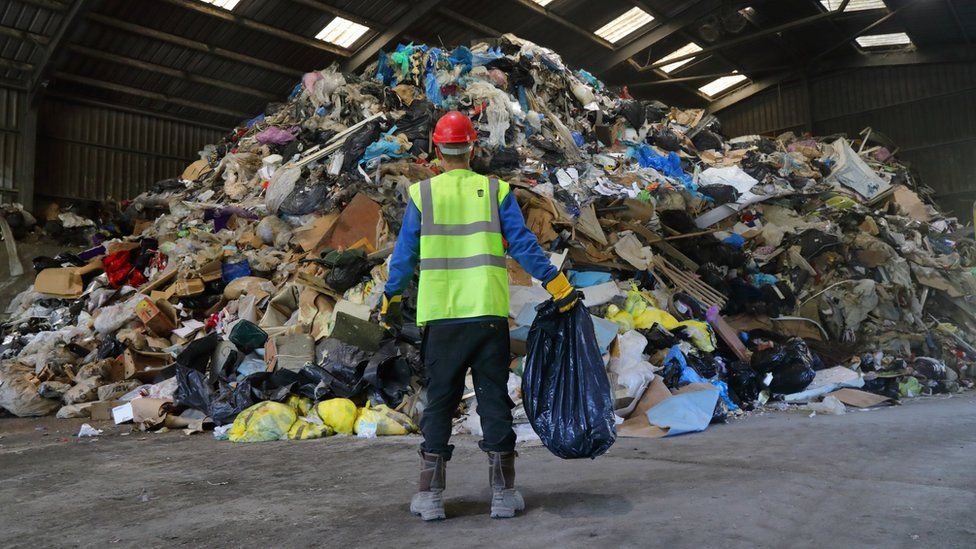 How much plastic do you use in a week?

Thousands of people will count their plastic waste for a week in a national survey of how much we consume.

The count, put together by the organisation Everyday Plastic and Greenpeace, starts on Monday.

Only the US uses more plastic per person per year than the UK, research suggests.

Campaigners say the count will shed a unique light on how households consume the environmentally damaging material.

Huge amounts of energy and fossil fuels are needed to make new plastic, and it sticks around in our environment for a long time. It is also only possible to recycle plastic two or three times before it becomes too degraded.

Microplastics have been found everywhere from human blood to Arctic snow.

Government figures suggest that UK households recycled 44% of their waste in 2020.

But some plastics put in recycling bins goes to landfill or incinerators, or is even sent abroad where it can be dumped instead. In 2020 BBC News uncovered mountains of plastic waste sent from the UK to Turkey.

"This count is the UK's biggest ever investigation of plastics. Millions of us do our part to recycle but we don't really know where our plastic waste ends up," Greenpeace plastics campaigner Chris Thorne told BBC News.

"This experience changed my life and changed how I understood the problem. Then I thought, what if other people did the same experiment as I did?" he told BBC News.

Participants in the Big Plastic Count receive a pack explaining how to count the plastics they use, broken down into 19 categories. They then tally up each type of plastic waste before putting it in the bin or the recycling.

The data will be analysed by Everyday Plastic and Greenpeace to produce a national picture of plastic waste.

The campaigners say radical action by government and supermarkets is required to reduce how much plastic is produced and to improve recycling rates.

Maria Hughes, who lives in Newport, Wales with her husband and two children, said she is taking part because she feels we are "drowning in plastic".

"I can't achieve the change needed alone. Ultimately we need manufacturers and supermarkets to change the packaging our food is in," she told BBC News.

Nadiya Catel-Arutyunova, Sustainability Policy Advisor at the British Retail Consortium, told BBC News: "Retailers have been committed to removing single-use packaging for some time. Many have signed up to the Plastics Pact, working with suppliers to eliminate problematic or unnecessary single-use plastic packaging. UK supermarkets are also investing in their reuse/refill offerings to radically cut down on packaging."

The government is considering plans to introduce a deposit return scheme and other measures to reduce plastic waste.

What happens to microplastics in the ocean?
Add Comment